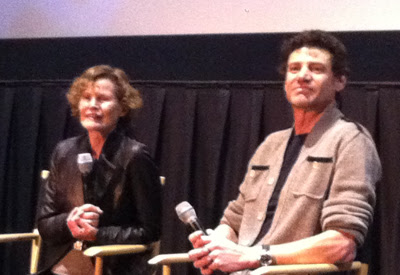 I just got back (Sunday) from seeing Judy Blume's TIGER EYES on the big screen... AND JUDY BLUME herself! The preview was hosted by the Atlanta Jewish Film Festival and both Judy and her son, fellow Director/Writer/Producer Lawrence Blume, spoke and answered questions afterwards.
I went with author Terra McVoy. Sadly, it was so crowded, we couldn't sit together (although we had a great time talking to and from), but we both ended up pretty close to the front. I was in the second row and got to ask the first question - Does she cry when she writes stories like that? Simple answer was, "YES! That's how I know a story is working!"
Judy's, *ahem*, Ms. Blume's work had such an impact on me when FOREVER was floating around my 6th grade classroom, it was profound to be able to see her in person. She overflows with the emotions she puts on a page, and she is teeny - teeny-tiny, skinny little thing. And so sincere, her son too. Their answers to people's questions were so interesting, I wish they could have talked for much longer than they did.
I'm so glad I was able to see Judy in person. I never met Garth Williams, I never met Maurice Sendak. I never met Dr. Seuss. But I've sort of met Ms. Blume and that is a big feather in my cap!
CLICK HERE to learn more about TIGER EYES and like its facebook page. And CLICK HERE to read a great wrap-up article about the event by CNN.
at February 18, 2013