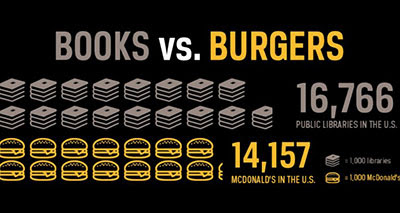 From Electric Lit - great info graphic about libraries in America, by H&R Block

From Shelf Awareness at Flavorwire: 25 Vintage Photos of Librarians Being Awesome

From Shelf Awareness: Image of the Day: Campaign Stop at Avid Bookshop

Also from Shelf Awareness: "The ABC of It: Why Children's Books Matter," at the Fifth Avenue (at 42nd Street) location of the New York Public Library, is in its last days. Curator Leonard S. Marcus will host a farewell toast in the library bookshop on September 7, 3-5 p.m.
I saw it, and if you're a kid lit lover, you really shouldn't miss it!

At The Scotsman via PW: JK Rowling honours Malala Yousafzai at the Edinburgh International Book Festival!

At NPR: How To Sell Diverse Books: A Bookstore Owner's Advice (Elizabeth Bluemle of The Flying Pig Bookstore in Vermont talks to Audie Cornish)

From SLJ, Ferguson Libraries Step Up to Serve Community in Turmoil

San Jose Mercury News via PW: 50-State Look At How Common Core Playing Out in US - how's your state doing?