Have you ever felt like an artist in a world full of cavemen - where nobody appreciates what you do? Enter LUG: DAWN OF THE ICE-AGE. David Zeltser stopped by to talk about his debut mid-grade... 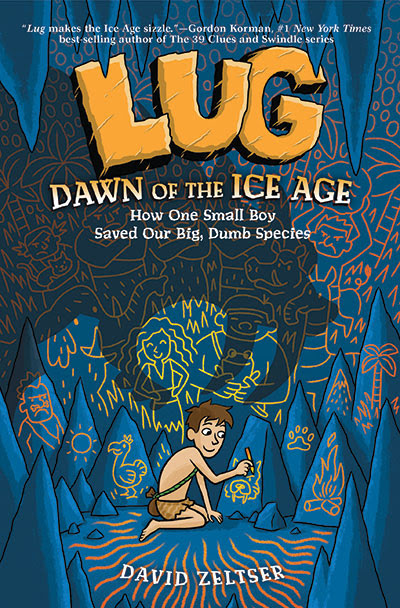 Hey there, Elizabeth and Dulemba blog readers!
Like you, I love middle grade and picture books. More specifically, I gravitate toward anything with a strong visual element. LUG is an illustrated middle grade book series where the main character is a cave painter. My next book out will be a picture book. No matter what the genre, I want both kids and adults to experience and enjoy my books.
In Lug: Dawn of the Ice Age, Lug is a boy who loves something that is forbidden by his clan. Here’s a taste of his clan’s rules: The Macrauchenia Clan’s Official STONE REGISTRATION SYSTEM All privately owned stones must be registered as one of the following:
o Stone good for bashing someone because easy to hold
o Stone good for bashing someone because easy to hide
o Stone good for bashing someone in eye socket
o Sleeping slab
o Dining rock
0 Boulder in front of cave (aka door)
0 Boulder not in front of cave (aka obstacle)
You’ll notice that “Stone good for art” is not listed. The Clan Council considered making art to be uncavemanlike behavior--a waste of time when you could be bashing perfectly good heads with perfectly good stones. So Lug has to keep his cave art a secret.
Q&A
Why Lug can’t share his art - what was your motivation behind this idea in the story?
Part of it is Lug’s relationship with his father, Big Lug, who is a much more traditional caveman. Unlike Lug, the father hunts well, loves to bash things, and is very good at a game called Headstone—a game that their clan plays against their rival clan every year. 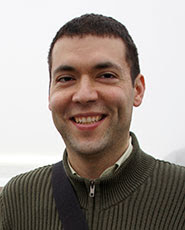 (Here’s an excerpt of Lug talking about Headstone:
“No one else in my clan seemed to care that it was getting colder. All they ever cared about was playing in the next big headstone game against the Boar Riders. Headstone is a game where you bash the opposing players’ heads with stones. In order to increase the risk of major injury, all players are also required to ride large animals while doing their bashing.”)
Of course, like any of us on some level, Lug wants his father to be proud of him. So he hides the fact that he has no interest in hunting and Headstone and would be much happier cave painting all day. Another motivation I had for this approach--and the book in general—was satirizing our culture. I enjoy playing sports, but I feel like American culture overly emphasizes and overfunds competition, and greatly undervalues--and underfunds--creativity in its kids. Competition is very important and definitely has its place, but I think we are losing sight of other just as crucial activities that aren’t so win-lose. When two kids are engaged in something creative, it’s a win-win situation for them and the culture. Of course, it’s one thing when a kid chooses to be competitive, and another thing when he or she is pushed into it. Lug is definitely in the ‘pushed’ group. 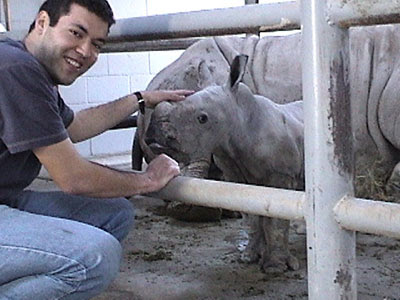 David says helping with the veterinary care of a newborn rhino at Fossil Rim Wildlife Center also eventually led to him writing LUG.

How does Lug fight against the powers that be to express himself and why is that important?
Lug’s clan is dominated by a bullying leader called Boulder and Boulder’s son, Bonehead. Lug’s journey is not to fight them physically, but to stand up for what he believes in and become a natural leader in his own right. While there is a good deal of action in the book around a particularly nasty group of saber-toothed tigers, I wanted to avoid the typical mano a mano approach when it came to the main conflict. Despite what Hollywood feeds our kids, most of the important conflicts they’ll face in life won’t be resolved by physical violence. The powers that be in this story are defeated through all kinds of other interesting means. I hope you’ll read LUG to see how!

To learn more about all my upcoming books, as well as the LUG book trailer here: http://davidzeltser.com/books/lug-dawn-of-the-ice-age 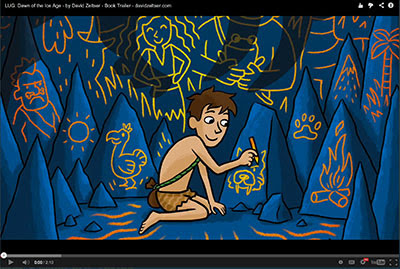 Bio:
DAVID ZELTSER emigrated from the Soviet Union as a child, graduated from Harvard, and has worked with all kinds of wild animals, including rhinos, owls, sharks, and ad executives. He is the author of Lug, Dawn of the Ice Age, the first book in a satirical series about the world’s inaction on climate change, for ages 8-12. He also has a forthcoming picture book, Ninja Baby, with Caldecott Honor illustrator Diane Goode (Chronicle Books). David lives with his wife and daughter in Santa Cruz, California. He performs improv comedy and loves meeting readers of all ages. His second book about Lug is scheduled to publish in Fall 2015. Visit David’s website at www.davidzeltser.com. He’s also on Twitter: @davidzeltser

CLICK HERE to visit other blogs on David's blog tour!

GIVEAWAY!
Egmont has kindly agreed to give a free copy of LUG: DAWN OF THE ICE AGE to one of my lucky followers. Must live in the US to win - enter below:

Would have loved to won this book for my oldest son. I love the Ice Age Era. The giveaway said it was closed though. Darn it. Library here we come.

Agh! Rebekah - thank you for pointing that out to me. We experienced technical difficulties on this week's giveaway. It is indeed now open if you'd like to try again! Sorry about that! e

Oh the is the best day ever. Would love to win this book for my son. Glad I now have the chance. Thank you for the opportunity.

I agree with Mr. Zeltser that competition has become the most important thing in today's society. The Arts are just as important and needed for a sane mind.

I get sooo tired of bureaucracy!! The blurb that was included just goes to show that no matter where or when you live, there are always going to be some stupid rules. Now that being said, I think this is going to tickle some child's funny bone, so of course, I would like to add it to our library! Thanks for the opportunity!