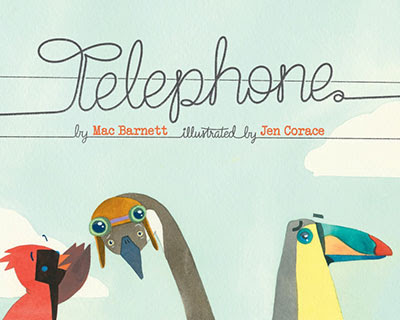 Remember how you played "Telephone" as a kid, and how messed up the message could get from one end to the other? Well, there's a new picture book about it called, what else, TELEPHONE! It's written by Mac Barnett and illustrated by Jen Corace. Jen stopped by to talk about it...

Q. Jen, you're no stranger to illustrating great picture books. In fact, you've illustrated some of my faves: LITTLE PEA, LITTLE HOOT, and LITTLE OINK. How did you get into this business?
A. It all happened like a big organic snowball. I had been interested in working in children’s books but didn’t really become serious about an illustration career until I was 27. It just clicked. I created an online portfolio and sent out promotional postcards and packets to publishers and art directors I wanted to work with.
And then I waited.
While I waited I became involved in the DIY movement and started doing fine art shows with galleries that worked with illustrators. By the time I started to create a name for myself in that field I was approached by Chronicle Books, who had had me on file for the past two years, to work on Little Pea.
By the time they asked me to work on Little Hoot I had been approached by Steven Malk for representation. 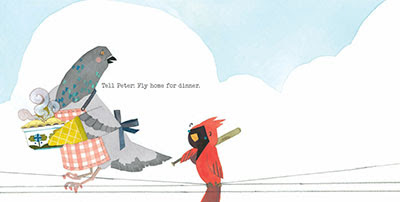 Q. Your first books work strongly with white space, where as TELEPHONE is fully saturated. Did this feel different to you?
A. It doesn’t feel different, it feels like a natural progression.
On the one hand, TELEPHONE is the culminating marriage of the more spare, negative space-aware work I’ve done in the past and the more detailed, fuller style I work in for fine art and even titles like SWEET DREAMS and STEADFAST TIN SOLDIER.
On the other hand, there still is a lot of negative space encompassing the characters, it just happens to be clouds and sky. I think that there is still that sort of shape on shape breathing room going on. It’s just disguised in a bit of blue.

Q. You're obviously a very talented designer as well as illustrator. I love the wires on each spread. Were they problematic to work with?
A. Oh! Thank you!
The wires weren’t problematic for me as I put them in last. I was worried that they would smudge and I was hesitant to use something like fixative to set them in place, not knowing how it would interact with the combination of watercolor, ink and gouache I was using. The only other concern that I had, which I also had with I HATCHED! … which also uses a fair amount of pencil … that in the scanning the work the scanner might pick up some shine off of the graphite. So far I haven’t run into that problem.

Q. My favorite spread is the one with the turkey. I laughed out loud at the idea of a turkey sitting on a telephone wire! Did you have fun coming up with all the birds you used?
A. I had the best time thinking about just the right birds and just the right impossible birds to put up on the wire. My art director, Kristine Brogno, was a great sounding board to navigate all the options we had at hand. She’s the best.

Q. It seems that Mac gave you some great words to play with. Did the visuals come easily or did you have to work at them?
A. I was thrilled to work with Mac. I was very excited to work on TELEPHONE.
Typically, when I get a new manuscript, I print it out, read it several times over, make notes. When I printed out the manuscript for TELEPHONE I experienced, for a brief, few days, the “fear of the blank page.”
More often than not manuscripts have context clues to point an illustrator in a direction. TELEPHONE, for the most part, is wide open. Outside of birds and a telephone wire it’s pretty wide open … Montana skies open. My only in was what these amazing, succinct, spare lines said about personality.
That degree of play is a lot of power. And me being me who is at the start, extremely literal but excited to play, was very conscious about balance. Balance between everything that could possibly be with what specific, right visual voice I could bring to the book.

Q. What is your illustration method?
A. I have all the usual steps … pagination, character design, sketching stage back and forth with my art director and editor. The one thing that is key in how I come around to solving visual problems or find my way in a project … a fair chunk of thinking and staring.
Usually I say thinking, sitting and staring … but more often than not I am lying on the floor, staring at the ceiling.
It’s a good quiet time. Loosely holding onto the project at hand and letting my mind free associate a path into a solution. It gives me an opportunity to see a piece or a book as a whole. I love it.

Q. How are you celebrating the release of TELEPHONE?
A. How aren’t I celebrating it?
On September 9th we have primary elections in Rhode Island. And I LOVE to vote. LOVE IT. On the same day I fly out to Portland, Oregon so that I can attend the opening of my solo show on the 11th. I will definitely get a cocktail onboard and if there is an inflight cheese plate … I will eat it.
When I arrive in Portland I will be staying with my friend, Amy Martin, who has been boasting about her stew prowess on Twitter. I am imagining that I will be eating stew she makes and she will be drinking the manhattans I make.
TELEPHONE’s release is gonna rule! 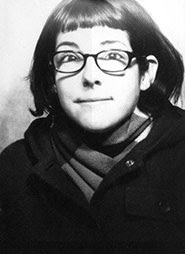 Q. What's next in line (get it - ha!) for you?
A. Well, I have two solo shows that are back to back. September 11th at Land Gallery in Portland and October 11th at Art Star in Philly. After that I will be designing a new game with my brother, Jason. Last year we worked on Lords & Ladies … a game about building a status hungry family via Edwardian societal rules … the next game is a real juicy one and I can’t talk about it much right now.

Q. Thanks for stopping by!
A. High fives!

GIVEAWAY!
Chronicle has graciously agreed to give a free copy of TELEPHONE to one of my lucky followers. Must live in the US/Canada to win - enter below!

love to share this with students I teach thanks.

love to win this book thanks

Fun! I love the LITTLE books that Jen illustrated, and Mac rocks, so what a great idea to put them together.

I hadn't thought about the game "telephone" in years. Would love to win the book!

I love to play Telephone. I would like to read this book with my children

thanks for the chance to win this book

Looks terrific! Thank you for the chance to win.
Maggie K.
Fort Worth, TX

Oh my goodness! The visual images in this book are just precious! LOVE them! What a nice job Jen did! Congrats! And thanks so much for the opportunity!

such a fan of jen corace! this book looks amazing!