HOW TO TRAIN A TRAIN by Jason Carter Eaton and John Rocco - GIVEAWAY! 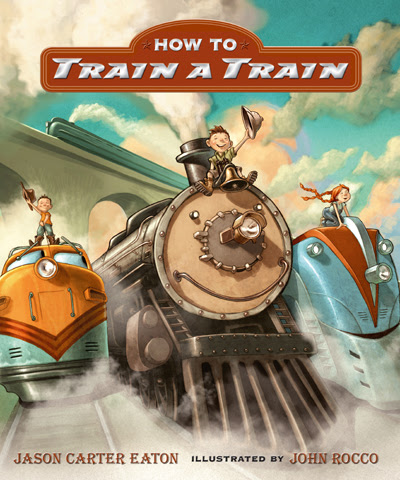 HOW TO TRAIN A TRAIN written by Jason Carter Eaton and illustrated by John Rocco reads like such a simple idea - a 'how to' book for acquiring and training a... not a puppy, but a TRAIN! It's a wonder nobody came up with the twist on the classic theme before. Of course, not just anybody could pull off such a seemingly simple idea. (And that's the beauty of really good picture books, they make complicated ideas appear simple.) It's the marriage of Jason's idea and John's execution that makes this story work GLORIOUSLY. I'm thrilled to have them both here today...

Q. Jason, I love the twist in HOW TO TRAIN A TRAIN. How did the story come to you?
A. I really wish I could take credit for it. But it was actually my son, Milo. He was about 3 at the time, and he turned to me one day and said he wanted a pet train. My toupee flew up about a foot, I gave him a hug, handed him to my wife, and then dove into my office to write it. 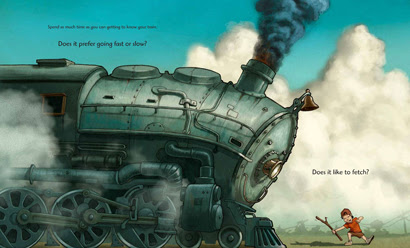 Q. Both of you - the dry wit of the story working against the outrageous visuals help make this book work so beautifully. Did you communicate during its creation or was it an achievement of separate brilliance?
A.
Jason: That’s a very politely loaded question. Candlewick actually encouraged me to take all the moisture out of my wit. And John was already dressed outrageously, so translating that to his art was a relatively simple step.
John: I guess I never saw the illustrations as outrageous. I tried to capture what I saw in my head, and maybe in my head I truly believe that you CAN go out and Train a Train. But we did not communicate directly during the creation, so…yeah…separate brilliance.

Q. Jason, was your manuscript chocked full of illustration notes? And how did you feel when you saw the art for the first time?
A.
Jason: Honestly, it was more notes than text. I’m extremely controlling and I told John to draw everything a very specific way. Everything.
John: Here is a picture of how I made use of Jason’s notes. Actually the manuscript I received was devoid of any notes. I guess Candlewick wanted to see what I would come up with first. I still haven’t seen any notes. 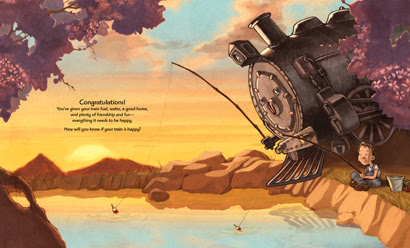 Q. John, when you received the manuscript, what was your initial reaction?
A. Actually, my studio mate, Brian Floca was four years into his book Locomotive, and so my first instinct was to ask him if I too, could do a train book. I didn’t want to jump on his tracks, so to speak. Luckily he thought it was a great idea! When I read the manuscript I loved the whole premise of a “How To” book on Trains that took itself so seriously. 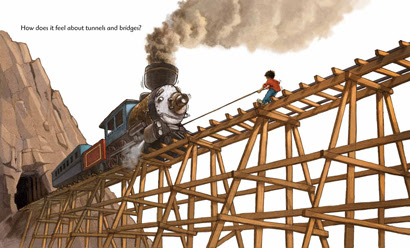 Q. John, these were some tricky perspectives to pull off. How long did these illustrations take and what is your method?
A. When I am creating the artwork I usually start off in pencil and do a complete graphite tonal drawing, from there I scan it in and paint digitally in photoshop. During that process I will add stains and textures to make sure those trains looked like they had some miles on them. I will normally spend 10-15 hours on the drawing and another 5-8 hours on the painting depending on the complexity of it. As far as perspective goes, I liked using extreme camera angles when it enhances the idea of the image. (Like the nervous train going over the wooden bridge.) I never try too hard to make the perspective perfect, because I find that when it is perfect it just looks a little cold and dead. Bad drawing can give an illustration some life, if you know what I mean.

Q. Jason, although you have an extensive writing background, this is only your second picture book. What are the particular challenges for you on creating picture books?
A. Words. There are so many of them and I love them all! But you just can’t fit so many of them in. My first book, The Day My Runny Nose Ran Away, in hindsight, could have half the words taken out and it would have been twice as good. It took me awhile to realize that less is more in picture books. One day, though, I’m totally gonna do a retelling of the Dictionary, and then I’ll finally get my wish.

Q. John, you're so good at laying out the design of books in interesting ways. How do you work that out?
A. You’re too kind. My method is to constantly look at all the pages at once laid out on a big spreadsheet in the computer or printed out and taped to the wall. I do this constantly from beginning to end, and it really helps seeing the balance of things. I try to create a balance of full-page bleeds, a page of spots, use of negative space and other visual designs to create interesting transitions from page to page. I will also do thumbnails at the very beginning just using big shapes on the page to indicate illustration. I work this same method with color to make sure that is well balanced. 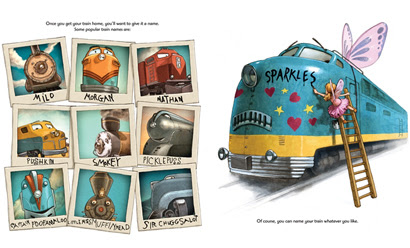 Q. Both of you - I love sharing paths to publication with my readers. What were yours?
A.
Jason: This book was especially tricky. I originally wrote it in 2008, and it was even dryer. Almost clinically so. The voice was similar to that old Monty Python sketch, “How Not to Be Seen.” It made me laugh, but I can’t imagine it would have been something kids would appreciate. It took about two years before I figured out the right voice. The problem then became Marketing & Sales. Every publishing house—and I mean every single one—passed on it because the sales people thought the humor was too sophisticated for the target audience, which they believed was 3-year-olds. Candlewick was the only one who truly saw the potential, and I worked really hard with my editor, Mary Lee Donovan, to balance the humor that adults would appreciate with the sweetness and heart that kids need. And ultimately, I think we’ve seen that kids a lot older than 3 still enjoy the book, even though they may not still be in that “train phase” because we didn’t dumb it down.
John: I am not sure if you mean “my very first book deal” or this particular book, so I am choosing to stick with Train A Train to stay on point. I originally got an email with Jason’s manuscript attached from Candlewick and they asked me what I thought and if I would be interested in illustrating it. I love this kind of email! I read it-loved it and the rest is history. I had no idea how popular trains are with little boys, I just knew I liked drawing them and thought this was such a clever take on a train book.

Q. Both of you - what is a typical work day for you like, and what else are you working on?
A. 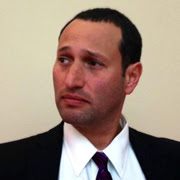 Jason: My typical workday involves avoiding work for as long as I can. It’s horrible. But between kids, and emails, and having to feed myself three or four times, and the big comfy couch near the computer that’s great for napping, I just seem to lose track of the days. And weeks. And sometimes months. The good thing is that usually I come out of this period with a bunch of ideas that I’m ready to write.
So I tend to write in quick, violent bursts. Generally, I hole up in a skuzzy motel room or my Dad’s NYC apartment when he’s out of town, and just consume Red Bulls and dark chocolate, and bang my head on the desk until something pops out. It’s disgusting and barbaric (and my mother hates it), but it seems to work for me. Last trip I wrote four picture books in five days. Two of them have sold and I’m about to show the other two.
I have three more picture books coming out in the next couple years: Great, Now We’ve Got Barbarians!, Bad Brows, and The Catawampus Cat. And a novel that I’ll be done with soon, if it doesn’t kill me first. And hopefully I’ll work with John again on another picture book. Right, John? Umm…John?? 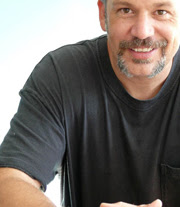 John: Actually Jason and I got together recently when he was in Los Angeles and we discussed ideas for another collaboration. We shall see what we can brew up!
My typical workday starts right after I drop my daughter off at school. My studio is in my back yard, so I make a cup of decaf coffee and set to work. That’s right…decaf. I spend most of my time drawing and painting throughout the rest of the day. I have a pretty good work ethic and focus, so if I have a day where I am not productive I can get pretty down in the dumps. I love to have a drawing or painting almost done by the end of the day, because finishing that off the next morning usually gives me the jumpstart I need to get productive right away. Starting a new drawing first thing in the morning is always tricky. When I am writing, I like to do that very early in the morning around 5:30 or 6:00 am. I like that quiet time before anyone in the house is up. As far as other projects go, I have a lot going on. I have my first YA novel, which I wrote with a childhood friend, coming out in April called, Swim That Rock. I also have a big illustrated book of Greek mythology coming out this summer called Percy Jackson’s Greek Gods, written by Rick Riordan. Right now I am working on two picture books. The first, Blizzard, is about my childhood experience during the New England blizzard of 1978 (Fall 2014). The second is called, Beep Beep Go To Sleep, written by Todd Tarpley. (Spring 2015)

Congratulations again and thanks so much for stopping by!

GIVEAWAY!
Candlewick has kindly agreed to give a free copy of HOW TO TRAIN A TRAIN to one of my lucky commenters! Must live in the US/Canada to win. Enter below.
a Rafflecopter giveaway
at January 16, 2014

my 9 year old son is a train fantatic so i would totally share this book with him.

I love the illustrations. This book is a must have in my collection.

Of course I'd share it with my son as well. LOL

I have a 2 year old little friend who just loves trains and I would share it with him.

I just saw this book recently on Amazon and it's on my wish list for my son. He loves trains and funny books.

This looks to be a great read for my students :) Thanks for the opportunity!

Hi Brooke! Yup - it's a perfect little boy book! And adults won't get tired of reading it either! :) e

My class would love this book as well as my nephew.

I have so many little boys at my school that would love this.

The illustrations are wonderful and I've got a few friends with boys, so can you say birthday present?