Independent Bookstore Day! - Thank you wrap up to my favorite indies!

Saturday was Independent Bookstore Day and it coincided with the 10th anniversary of the opening of Little Shop of Stories, my local children's bookstore. They opened their doors about two weeks before Stan and I moved to town, and they've had my back since day one. All of my books have had launch parties there. It's been home to our regional SCBWI Gallery Show and our first Illustrators' Day. I've done numerous events with them, and my art still hangs on their walls. I've spent enough money on books there to help hold up the roof. Heck, I even nominated them for the Pannell Award (best bookstore), which they won. It's been a symbiotic relationship and one that has meant the world to me. So, of course I was there to help celebrate their big day.
So was another store favorite, Judy Schachner - creator of Skippyjon Jones. She read her latest incarnation, SNOW WHAT. It was so fun to watch the children slowly gather and get closer to this master storyteller. By the end, she had mesmerized a large, devoted group of young fans. 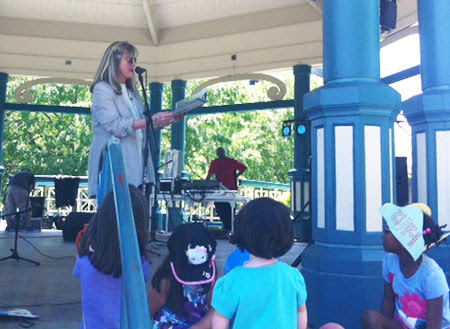 Judy and I have been friends for years, so it was great to catch up - albeit briefly. And to hang out with my favorite folks from Little Shop of Stories. Here's Marcy Cornell with her new baby, Judy, Me, and "Miss Kim" Jones (store manager). 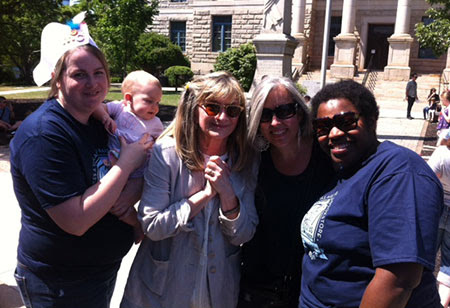 Click this image to visit CBS news and hear more about the big celebration plans: 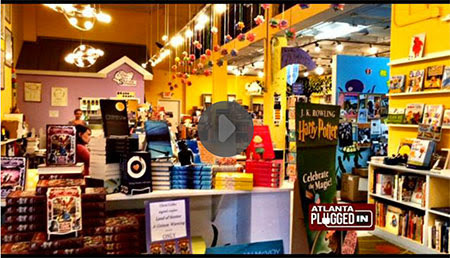 Another independent bookstore that has meant the world to me and my first novel, A BIRD ON WATER STREET is FoxTale Book Shoppe in Woodstock, Georgia. Although not as physically close to where I live, FoxTale Book Shoppe has been my biggest supporters in the north Georgia community. They handled the booksales during my Appalachian Book Tour from Benton, Tennessee to Brasstown, North Carolina. They constantly promote ABOWS online, keep it in stock, and hand sell it to patrons and schools. I am so grateful!
Avid Bookshop in Athens, Georgia is also a little farther away, but they are big fans of LULA'S BREW. I've spent many signings dressed as a witch, sharing Lula in their sweet store.
Other nearby indies (near enough to get there and back in a day - which I have many times), are Hall's Book Exchange in Gainesville, Georgia; Book Exchange in Marietta, Georgia; and Barnes & Noble in Cumming, Georgia.
Being an author and illustrator for fourteen years now, I can tell you firsthand that bookstores and booksellers are my heroes - my front line. Without them, my books are invisible. With them, my books are invincible! How nice to have a day dedicated to saying "Thank you!"
at May 04, 2015

Email ThisBlogThis!Share to TwitterShare to FacebookShare to Pinterest
Labels: ABOWS