It's hard to believe it's been a year since my TEDx Talk, "Is Your Stuff Stopping You." In that time, it's been viewed over 100,000 times and received lovely comments. It was a wonderful experience all around.
So, I was thrilled to be able to mentor and encourage a classmate to give her own TED Talk this year. 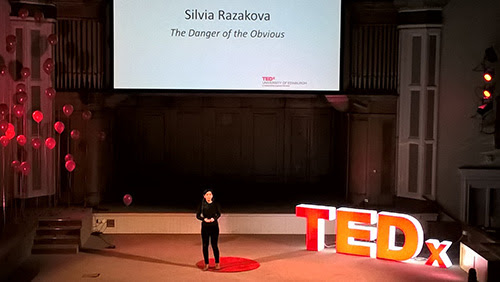 Silvia Razakova is a Graphic Design MFA student, who I've shared this wild ride with the last two years. She is smart, dynamic and shared a strong message about the power of graphic design in her talk, "The Danger of the Obvious." She shared the power that graphic designers wield by playing on the visual cliches society has grown so used to. People react strongly to symbols, sometimes forming opinions without examining the facts behind them. Before her talk, Silvia and I often discussed how the Brexit Bus was a perfect example of this. 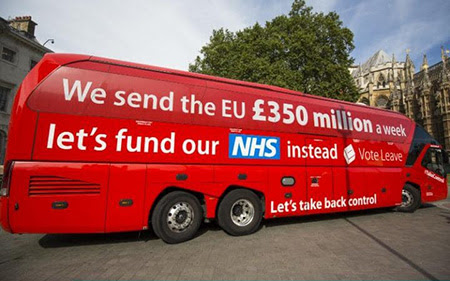 Many Brittish voters voted to leave the EU (Brexit) based on this bus's message, believing that money going to the EU would be funneled to the NHS instead. It took one day for that lie to be outed. Hence, the power of a visual.
Silvia made her message profoundly clear. 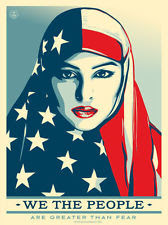 We, as citizens, must go beyond the advertising machines that hopes we won't. It's our responsibility to look beyond the graphics! Because, while graphic design can create powerful images for positive change (like this image by Shepard Fairey), the inverse can also be true.
An artist drew her impressions of Silvia's talk as it happened. 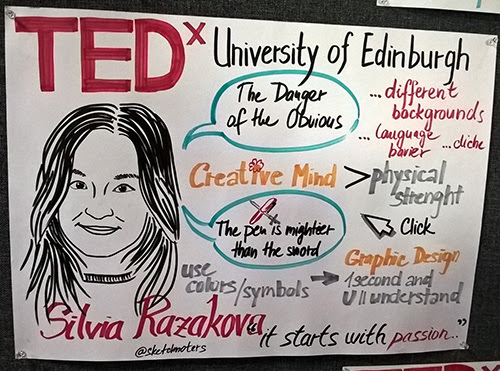 The speaker after Silvia was also very good, Zac (?), a biologist and natural storyteller. He encouraged us all to be forces of good in this world. And perhaps even inspired an idea....(more on that later). 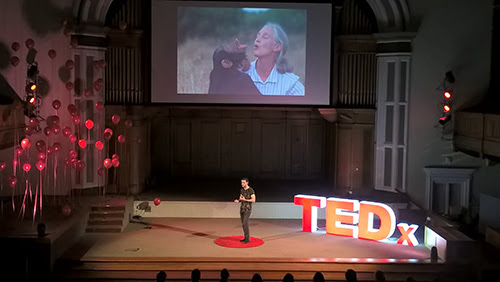 All said, it was lovely to experience TED from the audience side this year, and I was SO PROUD of Silvia! I'll share the link when her talk goes live so that you can enjoy her talk too. I'm convinced she'll go viral too!
at February 22, 2017