As an educator, I found this video to be especially helpful in understanding the current student loan debt crisis. Bottom line, it's a societal problem created by societal decisions to transfer costs that were once subsidised by the government (as adding to the greater good and success of our nation) to the individual students themselves, which is hurting our nation as a whole. We moved from educating our citizens for the sake of being more competitive on the world stage, to strapping our brightest minds with debt just as they are in their most influential stages in life. It's hurting our economy, leading to lower investments in marriage, child-birth, home ownership, etc. And it's not solely a priveleged, white male issue. "Women hold roughly two-thirds of all student debt," and yet make less money in the job market, putting them at greater risk debt-wise. So, while it is not a complete answer, I support Joe Biden wiping away $50K of federal student debt. But it needs to be followed with legislation that returns us to a federally supported higher education system, which makes us more globally competitive. Most other first-world nations subsidize or fund higher education, the US is an outlier in this regard. This needs to be fixed. 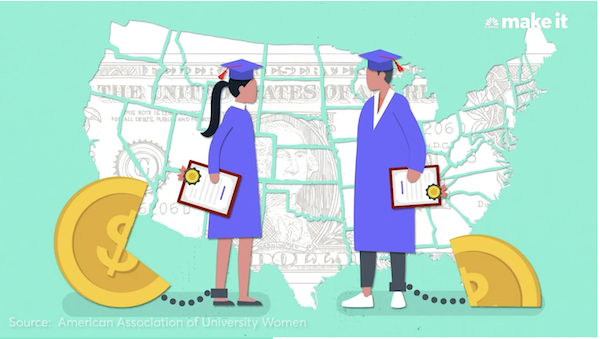 When I posted this to facebook, an interesting conversation ensued, so I went a bit further to say:
I want to make it clear - I don't think loan cancellation by itself is the answer. It's a temporary solution. The government used to fund the majority of higher education. That support started to decline with Reagan and pursuant recessions. Now, the onus of the cost has moved to the students, creating the situation we're in today. (My own university used to get a fair amount of its funding from the state of South Carolina - funding that was cut during the last recession and was never returned to pre-recession lebels.) So, to clarify - tax payers did used to pay for college - it has always been seen as an appropriate investment in the betterment of society. The more educated citizens we have, the more innovation we have in all fields, which makes us less reliant on other countries. The problem is, government has Stopped paying for it, and now our best and brightest minds are mired in so much debt, they can't contribute to society. So, there is a seed change that needs to occur, or reoccur. Yes, the cost needs to go back to the government, because WE ALL BENEFIT from a more educated populous, just as we all benefit from good roads and fire departments. There are some things that simply must be in the public trust.
at December 20, 2020