DANGEROUSLY EVER AFTER with Dashka Slater and Valeria Docampo - GIVEAWAY! 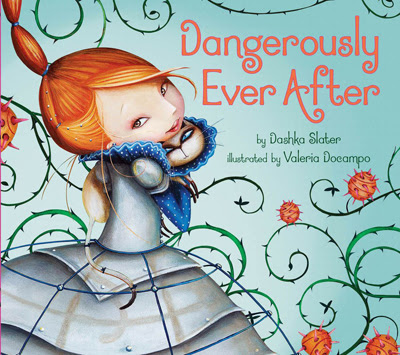 Today I have the rare treat of talking to both the author, Dashka Slater, and the illustrator, Valeria Docampo, of the new picture book DANGEROUSLY EVER AFTER (Dial). Valeria's native tongue is Spanish (she's from Buenos Aires, Argentina), so while she asked for forgiveness on any translation errors - I think her English is quite good! Take it away ladies...

Q.     Congratulations to you both! DANGEROUSLY EVER AFTER has got to be one of the most beautiful and unique stories I've ever read. Dashka, how did you come up with the story?
A.     Thanks so much!
I stole the idea from a small child, actually. One day my son came home from first grade and announced he was going to write a story about a queen who tried to plant rose seeds but accidentally planted nose seeds. I couldn’t wait to read it! But days went by, and then weeks, and he never wrote it, so finally I decided that the only way I’d ever get to read it is if I wrote it myself. 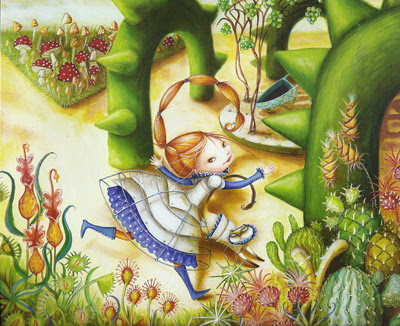 Q.     Valeria, were you completely stumped as to how to approach the illustrations when you received the manuscript, or did images immediately start popping into your head?
A.     When I read the manuscript for the first time, of course I was surprised by some fantastic elements of the story, such as the plants that sting and stink, the grenapes and the nose roses. Since all imaginary things come from an unknown combination of known elements, I started by entering the world of botany and studying centuries-old illustrated books on flowers and plants.
Starting from this scientific and literary background, I began to play, combining it with very different elements such as swords, grenades, and armour to create a new botany for the particular world of this book.
This is how the first studies of new plants and species began. Once I had defined each one, I started to design the garden where the story would take place and placed the plants there, tracing out the map that appears on the title page. That is, the first step was to create this new botany and the scenery. 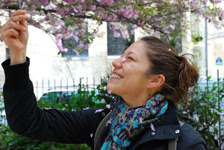 Then I started to imagine Amanita, a character that also contains very dissimilar elements such as her care for flowers and her passion for danger. Since Amanita continued to be a princess in spite of loving knives and thorns, I imagined her with sumptuous clothes and elaborate hairstyles. The first hairstyle and outfit that I imagined brings to mind a scorpion. The editor saw this first character study and suggested that Amanita wear different outfits and hairstyles in the different stages of the story; because of this we see her later with caterpillar, spider, and mushroom suits (her cat also wears coordinating clothing). Amanita’s different outfits also served to expand on the development of the character. For example, on the final page, when Amanita falls in love, we see her with her hair down and in a jellyfish outfit, which is much more romantic and delicate than the armour-like scorpion outfit on the cover. [[Click the image to see a larger version in a new window.]]

After I had the species, scenery, and wardrobe, I worked on the characters and the general atmosphere of the book. From the beginning, I very much liked the role reversal that the story proposed. It is for this reason that Amanita is a blue princess instead of pink, and Florian is dressed in warm tones. I was also interested in toning down the danger in the images, taking a bit of the drama out of the relationship with the swords, thorns, and knives, because no one is completely bad or good, and I believe that the richness of the story lies in this ambiguity. [[Click the image to see a larger version in a new window.]]

Q.     Dashka, Are you a gardener - why plants?
A.     I had a lush and enticing garden filled with artfully-arranged sculptures, secret bowers, tinkling fountains and a writing desk shaded by a grape arbor. Unfortunately, it was stolen in the dead of night by some cruel prankster who replaced it with a couple of sickly roses that get eaten by deer every time they flower and a lot of blackberry brambles and poison oak.
Perhaps you can see now why Amanita has a dangerous garden rather than a pretty one.

Q.     Valeria, How did you approach creating the "nose roses"? That must have been challenging!
A.     It was very interesting and fun! I looked at many pictures of exotic flowers until I ended up with a flower that had a shape similar to a nose. Starting there, I tried to create a “nose rose” that had expressive characteristics, because these flowers are really an additional character in the story. Since the text talked about new flowers, the second challenge was to give a unique character to each one and show them in different postures and situations. Therefore, the next step was a study of each “nose rose” and its different positions. 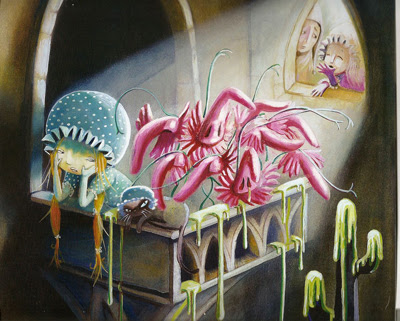 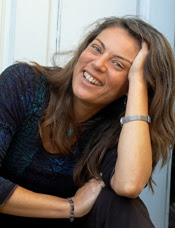 Q.     Dashka, You have some other impressive titles under your belt, like THE SEA SERPENT AND ME illustrated by Catia Chien, FIREFIGHTERS IN THE DARK illustrated by Nicoletta Ceccoli, and BABY SHOES illustrated by Hiroe Nakata. What's it been like to work with so many talented illustrators and see their adaptation of your words for the first time?
A.     It’s a humbling experience. With every book I write, I have vivid illustrations in my mind and there’s always a moment before the first sketch dummy arrives that I wonder how the real illustrations will possibly measure up to what I imagine. And then I see the illustrations and discover that the images I’ve imagined are awfully limp and ordinary when compared to the work of a real artist. Valeria’s nose flowers are so wonderfully botanical, like fleshy orchids that you might discover blossoming in a remote crocodile-infested swamp. They’re not at all what I pictured when I was writing the book, but once I saw them, my own mental nose flower picture just kind of covered itself with a towel and ran out of the room in shame.
Could there be anything better than having an artist whose work you adore make paintings based on the ideas floating around inside your head? I’m pretty much the luckiest person on earth to have had that experience four different times with these four amazing illustrators.

Q.     Valeria, Can you describe your illustration method to my readers?
A.     The illustrations for Dangerous Ever After were painted by hand in gouache on paper and then digitally retouched.

Q.     Dashka, How do you come up with ideas - what makes one stand out to you? And how did you break into children's books?
A.      Idea generation is the least of my worries –my brain tends to turn anything that happens to me into a story. Turning those squirming, irregularly-shaped ideas into finished manuscripts – that’s a different kettle of fish altogether. The ideas that stand out – that feel worth trying to wrestle into submission -- are the ones that surprise me. A surprising idea feels like being goosed -- I think I literally hoot with pleasure when I think of something unexpected. This is why I don’t write in cafes, by the way. Nothing like hooting with pleasure at your own idea to make the other patrons grip their laptops firmly and edge toward the exit.
I started out as a poet, then became a journalist, and then published a novel, all before attempting my first children’s book. What brought me to children’s books was publishing a book for adults and having to field that favorite interview question: “Which writers influenced your work?” I found that the writers I wanted to talk about were children’s writers, which I thought showed that I wasn’t actually a very serious person. Then I gave birth to my first child and had an excuse to start reading children’s books again. I felt like I was returning to my first love. Because I had started my writing career as a poet, the economical language of picture books felt very natural to me and I loved writing something that was meant to be read aloud.

Q.     Valeria, You also have a slew of books under your belt in Argentina and around the world. How did you get into children's book illustration?
A.     I started painting as a child and then studied Fine Arts. I graduated in Graphic Design and made commercial illustrations for magazines and packaging. But my passion for painting, cinema, and literature soon brought me into children’s territory. In illustrating children’s books, I found a fascinating language where all at once a story is told, characters and scenes are created, contrast with the text is made, and an entire universe unfolds with the tools of painting: light, shadow, colour, and composition.

DANGEROUSLY EVER AFTER is on tour with OH NO, LITTLE DRAGON which I featured on November 15th - CLICK HERE for the interview with Jim Averbeck. (Review copies supplied by the publisher.)

GIVEAWAY!
a Rafflecopter giveaway
at December 06, 2012

e, thanks for this fascinating interview! I can't tell if the comment option in the give-a-way box means a comment shows up on the post... Won't repeat the whole thing, but I wanted to say how much I enjoyed this and how amazing Dashka's and Valeria's work is!