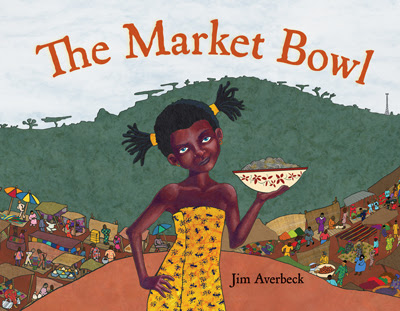 Sometimes a book comes in that you can tell has a history, a story behind the story. Such is the case with Jim Averbeck's new THE MARKET BOWL. It's about a young girl in Camaroon looking for short-cuts to sell her bitterleaf stew. But as her Mama Cecil, and soon Brother Coin does too, doing things right is the right way to go.
Jim stopped by to talk about his new book... 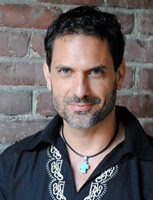 Q. You spent four years as a Peace Corps Volunteer in Camaroon. Was this a local story?
A. No, not really. The story is original, but based on some of the things I encountered there - the markets, the belief if ancestral spirits that watch or guide you, and, of course, ndolé (or bitterleaf stew), one of my favorite dishes. Having lived there for four years I felt pretty confident in my ability to capture an authentic flavor of the country. But just to be sure I had two Cameroonian friends check out the story and they gave it a thumbs up.

Q. What does bitterleaf stew taste like?
A. It's delicious! But only if it is prepared correctly. Ndolé leaves are extremely bitter, so they need to be finely sliced and washed many many times to leech out the bitterness. What's left is very tasty. The sauce is made from pumpkin seeds and is creamy and salty. There's a recipe at the end of my book. Folks should try it to get a taste. 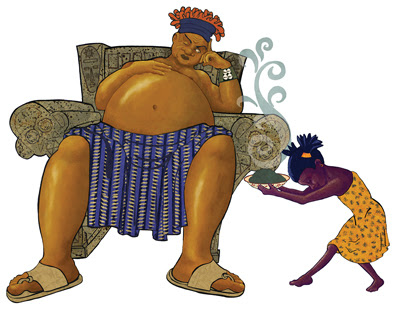 Q. This is a very different color palette, media, and feel from OH NO LITTLE DRAGON! How did you approach this book differently?
A. THE MARKET BOWL is for an older audience, so I felt free to make the art a bit more sophisticated. Some of the processes from LITTLE DRAGON were used here. For example, I still scanned papers and cut them "electronically" to make a sort of collage. But I also used acrylic paint to depict the faces and hands of the characters. I was particularly interested in making sure that Yoyo was portrayed with very dark skin. I think too often African skin is lightened up to make the printing easier—a wide swing in tones in a picture can be difficult to reproduce.
The palette comes straight from Cameroon. I remember writing my family when I lived there about racing through the forest and being moved by the red earth and the deep green of the rainforest. So these were my base colors for the backgrounds. Then I added a crazy, saturated palette of colors and textures for the clothing of the people and the goods in the market place. I’m happy with the results and I think kids will be too. 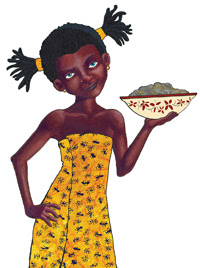 Q. THE MARKET BOWL reads like a story that got into your soul and wouldn't leave you alone. How did it come to you and eventually become this book?
A. The Peace Corps has three goals. The third goal is to bring knowledge of your host country back to America and to share it with people here. Volunteers are charged to remember to do this when they finish their tour of duty. I did some school visits when I first got back, but I wanted to reach a larger audience if I could. As I gained a wider following for my picture books, I realized that creating one about Cameroon would be the perfect way to do so. The character of Yoyo is based on a little girl who lived near me when I was in Africa. Her name was Lulu. I called her Lulu the Bulu, which was the name of her ethnic group. She had a friend who was named Yoyo, which is where my character’s name comes from. Lulu would visit me with her brother and older sister. Lulu was maybe eight years old and willful and headstrong and thought nothing of staring down the big ntangan (white man) who lived down the lane if he was being an idiot. Once I decided to write that sort of character, I knew I needed a big antagonist, so a god-like ancestor seemed appropriate. I tossed in a million things that I love about Cameroon. I admit, I wasn’t sure anyone besides me would care about this story, which is a love letter to my second country- Cameroon. So I was delighted when the Junior Library Guild chose it as a premier selection.

Q. Are you doing anything special to promote THE MARKET BOWL?
A. I think writers need to look at promoting themselves, and their body of work, rather than individual books. To that end, I recently ran the Red Carpet at the Newbery-Caldecott-Wilder Award dinner. The results are at www.kidlitredcarpet.com

Very cool! Thanks for stopping by Jim! 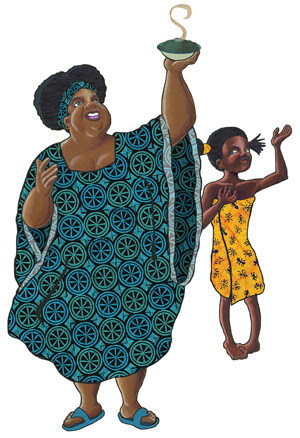 GIVEAWAY! Charlesbridge has kindly agreed to give away one copy of THE MARKET BOWL to one of my lucky commenters. (Must live in the continental US to win.) Enter below!
a Rafflecopter giveaway
at August 15, 2013

sounds like a cute book my nieces would love

Love the concept and look of this book!