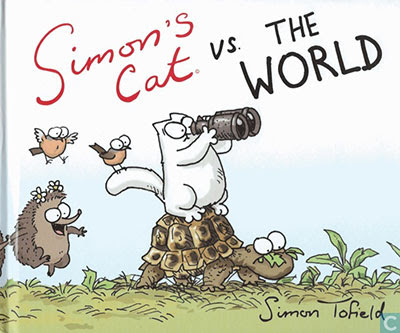 I can't tell you how tickled I am to have Simon Tofield on today, talking about his wildly successful "Simon's Cat." It began life as a YouTube viral phenomenon, and quickly grew into a beloved character ingrained in our lives. Because, who hasn't known a cat like Hugh, after all? He reminds me so much of my own cat, and I'll bet he reminds you of yours - or a cat you know. Let's get a peek behind the curtain of Simon's success...

Q. Simon, I was teaching at Hollins University in Roanoke, Virginia this summer, so I asked some of our students to provide some of the questions along with my own... here's one of mine: I'm such a geek for good line quality and you have it in spades. Did you stumble into it, or are you a geek for line too?
A. I have several clean up artists that work in my animation team now and it is important to make sure that the 'life' of the line is still maintained in the animations, as this is one of the things that makes Simon's Cat so special.

Q. Some of the students wanted to know your cat's name! It's "Hugh," right? Is there anything you haven't shared about him yet?
A. Well I have four cats, Hugh is the cat that my film Cat Man Do is based on, not many people know that Hugh comes to see me every morning and tries to suck my ear, he does this because as a kitten he wasn't weened off his mother, and he thinks I have become her replacement! It can been cute sometimes, but often it is very painful!

Q. What percentage of the antics are real versus made up?
A. I get my inspiration from my four real life cats, I like to keep the majority of the animation purely observational as this is where most of the charm lies. However the made up elements are where some of the funniest gags lie eg the baseball bat in Cat Man Do.

Q. What software do you use to create your animations?
A. My animators and I have been using Adobe Flash as that is the software I originally learnt digital animation on, however we are now experimenting with using a TVPaint which is another 2D animation program.

Q. Was working in a book format a challenging difference for you?
A. I had never made a book before but I really enjoyed the process. Now I love making books as it allows me to include a lot more ideas and gags than I can in the short films.

Q. I've always thought drawing and coloring were two different skills. Did you find working in color, rather than in straight black and white, to be challenging?
A. Yes it was very different, I kept the cat white and coloured the background to make the cat stand out against the detailed background. Working with colour does allow me to include more detail in my work however it does have it's own set of challenges in comparison to Black and White, such as deciding on tonal perspective.

Q. SIMON'S CAT has become a major licensing success - congratulations! How do you maintain the integrity and original intent of your creation?
A. I go through all new product prototypes and proofs personally and carefully make sure that the integrity of the Simon's Cat brand and the quality of the product is maintained.

Q. Can you think of your proudest moment or more transformative moment in your journey with SIMON'S CAT?
A. Seeing my first book being published and hitting the shops was a very proud moment for me. It was always a dream of mine to create a book and I never thought it would come true!

Q. It seems you've created a character who will be around for a very long time. What hopes or ambitions do you have for SIMON'S CAT?
A. I would like to make a television series one day. Keeping the same short snappy format and experimenting by having some fun with developing other characters in the Simon's Cat universe.

We all here at Hollins wish you much continued success!!!

This is a great video from 2009 in which Simon talks about the invention of Simon's Cat.

Permalink
And another from 2010 when the licensing really started taking off: 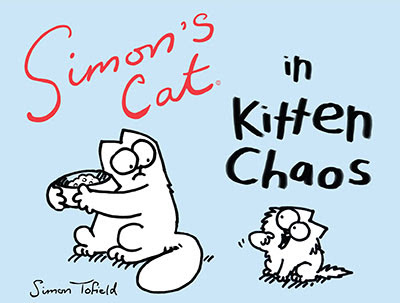 Simon is also celebrating the release of yet another new book - SIMON'S CAT IN KITTEN CHAOS. Here's a little about it...

Half the size, double the trouble. Simon’s cat has a new little friend who may be even more accident prone.
With over 200 million hits on YouTube, Simon’s Cat is a genuine word-of-mouth phenomenon. Fans from all over the world have fallen for this adorable but anarchic feline who will do just about anything to be fed. Simon Tofield’s beautiful drawings and warm humor come alive on the page in this irresistible humor book—an outgrowth of the enormously popular short films featured on YouTube.
Like all great cartoon creations, from Peanuts to Asterix, from Garfield to Tintin, Simon’s Cat has continued to evolve by introducing new characters and new story lines. After the runaway success of the first two books (Simon’s Cat and Simon’s Cat: Beyond the Fence), Simon welcomes a cuddly new addition to the family in the form of Simon’s Kitten, who is sure to delight Simon’s millions of fans.

OMG, I LOVE Simon's Cat! What a coup to have him on your blog. So excited for his book.

this sounds like a fun book. thanks for the chance to win

My grand niece would love this.

How adorable! Obviously I've been missing out, since I've not seen Simon's Cat before!

I don't think I have read any of Simon Tofield books, this looks like a great book. Can't wait to read it

I love it too! I have the video saved on my computer. Go Simon's Cat!

I had seen YouTube clips, but had no idea that it was in book form. Every house needs a Hugh

I had seen YouTube clips, but had no idea that it was in book form. Every house needs a Hugh