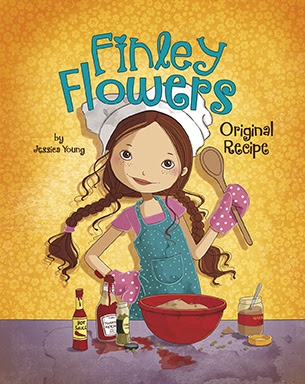 Idea Garden
by Jessica Young
I’ve just finished the fourth book in my first chapter book series, Finley Flowers. While working on it, I’ve been hanging out with my 3rd and 4th grade self a lot. I wasn’t a kid who was constantly creating things like my main character, Finley, but I’ve always loved making stuff. Finley and I share some other qualities, too: enthusiasm, stubbornness, and having a hard time sitting still (which Finley calls being “hoppity”) come to mind. We’ve both been known to zone out in class, and patience is not one of our strengths. We twirl our hair when we’re thinking hard and tend to be tangential, which reminds me of geometry. And tangerines. But I digress. . . .
In the series, Finley has an “idea garden” in her head where all her Fin-teresting thoughts grow — so many thoughts, it sometimes feels like they’re bursting out her ears. Her best friend, Henry, calls that her “Flower Power.” Finley may be extra creative, but all of us have idea gardens. Sometimes we neglect them, yet even then, ideas can thrive wild and untended. At school visits, I emphasize the importance of noticing ideas and writing them down. My thoughts are so fleeting — if I don’t capture them on paper, they usually escape for good. Just like real seeds, my idea seeds don’t always sprout right away. I have to water them with further thought, experimentation, or research, and wait patiently for them to grow. As I was writing the Finley books, I realized that some of my idea seeds had been lying dormant since I was a kid, or slowly putting down roots where they’d been lodged in my mind. It’s been really fun revisiting them and bringing them to life. 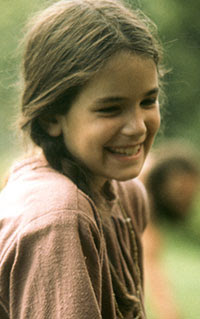 As a child, I was lucky enough to have some great friends and a family who were supportive of my interests. But I also had a feeling of powerlessness — of wanting to do something important, yet feeling like I was “just a kid” and not really knowing what that thing might be. How could I have known that simply having my eight- and nine-year-old experiences, thoughts, and ideas would be so important later on? I only wish I’d paid more attention and taken notes!

About the Finley Flowers series:
Original Recipe: Finley's best friend Henry is about to turn nine, and Finley has a major problem: she has no idea what to give him for his birthday. He already owns all of her best creations! The school cook-off might be the perfect solution. The grand prize is a year's worth of Flying Pie Pizza, Henry's favorite. But coming up with something original and tasty is harder than it looks. As one crazy concoction leads to another, Finley discovers that cooking is just like the rest of life — things don't always turn out as planned, and friendship is the real prize. (Click the image to go see the book trailer on YouTube.) 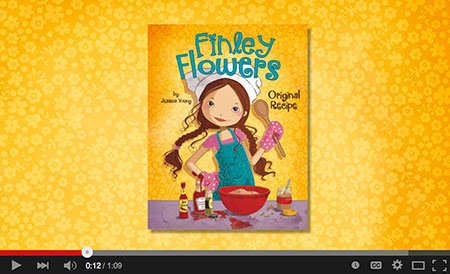 Nature Calls: summer is here, and Finley is heading to Camp Acorn! She can't wait to make crafts, eat s'mores, and prove to her older brother that she's tough enough to get back to nature. Unfortunately, she'll be sharing a cabin with Olivia Snotham, who's not exactly the outdoorsy type. When nature calls and the girls get lost on the way to the restrooms, Finley's spooky ghost story comes back to haunt them. As they work together to find a creative way home, Finley discovers that there's more than one way to be tough.

Books three and four, New and Improved and Art-rageous, will be out in Fall 2015! 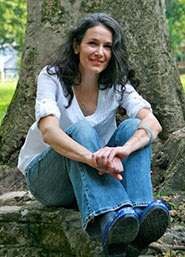 Jessica Young grew up in Thunder Bay, Ontario, Canada. The same things make her happy now as when she was a kid: dancing, painting, music, digging in the dirt, picnics, reading, and writing. She lives with her family in Nashville, Tennessee. When she was little, she wanted to be a tap-dancing flight attendant/veterinarian, but she’s changed her mind!
Jessica’s award-winning debut picture book, My Blue is Happy (2013, Candlewick Press/Walker UK) is a 2014 Charlotte Zolotow Highly Commended Title and was included on the 2014 Bank Street College of Education Best Books of the Year for Children and Young Adults, the Texas Library Association’s 2014 2×2 Reading List, the Ontario Library Association’s Best Bets 2013, and the Library of Congress/Center for the Book’s 52 Great Reads list. Her next picture book, Spy Guy, will be published in May by Harcourt Children’s Books. Original Recipe, the first book in her chapter book series, Finley Flowers, will be published in February by Capstone Books for Young Readers, and the second book, Nature Calls comes out in April. All Paws on Deck, the first book in her early chapter book series, Haggis and Tank Unleashed, will be published in January 2016 by Scholastic Branches. Find out more at: www.jessicayoungbooks.com 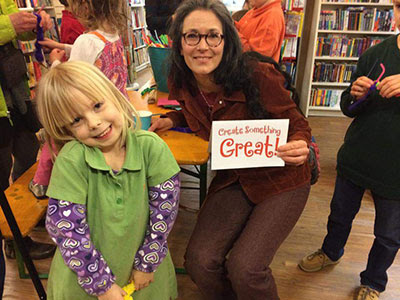 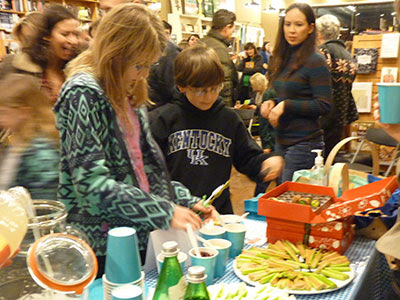 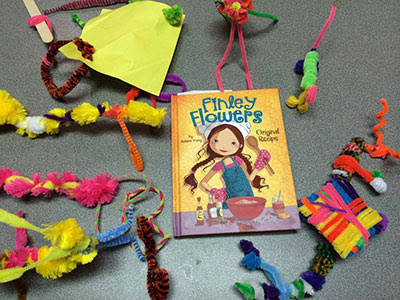