I am thrilled, tickled, elated to have Ruth Sanderson, the Co-director of the MFA in Children's Book Writing and Illustrating Children's Books at Hollins University and also my boss and colleague, here today to talk about her latest picture book, CASTLE FULL OF CATS. Ruth is hands down one of the best illustrators in children's literature, so read and learn!!! 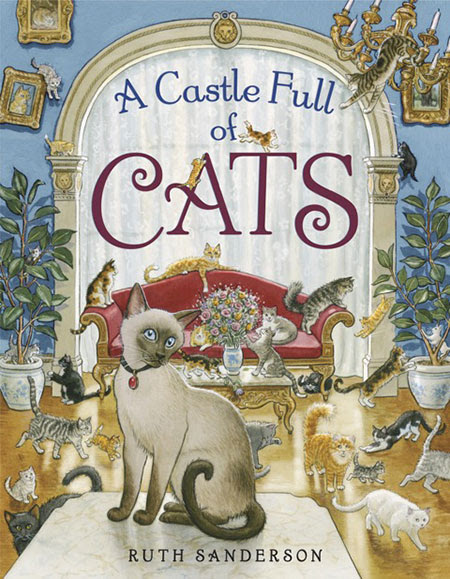 I’d love to share the process for creating the cover illustration of my new book A CASTLE FULL OF CATS, released by Random House this year. 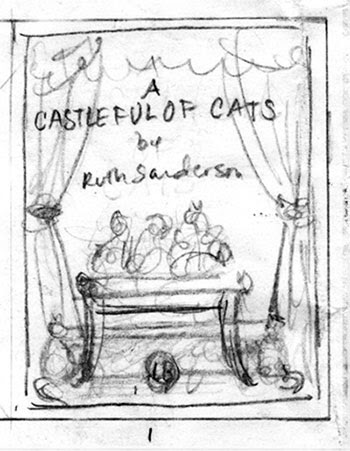 As you can see from my initial storyboard sketch, I envisioned the cover as a view looking out a window with cats watching the outdoor activities from the inside of the castle. 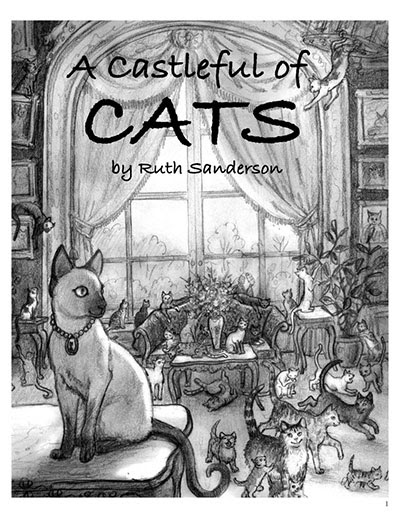 At the next stage, I created a more detailed cover sketch to focus on the queen's "favorite" cat. I also depicted the cats and kittens in a much more active and playful role, indicating the queen and the king outside in the garden. And, I played with how the title of the book might fit on the cover illustration. 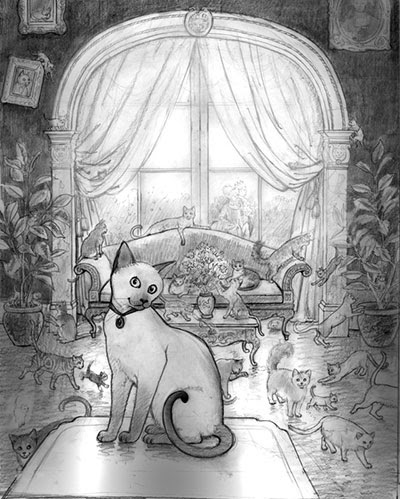 In the final cover sketch, I brought the queen's cat closer to the center and looking directly at the reader while still allowing the queen and king to be seen through the window. 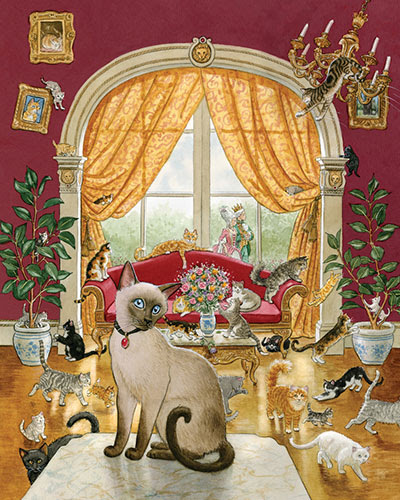 In creating the finished illustration for the cover, I wanted the window to really stand out, so I created a maroon wall in the background, actually painting it in acrylic over the watercolor painting to get a really solid effect, and because a dark, even color is so hard to create in watercolor! When I submitted the illustration, the editor and art director felt that it was too dark... 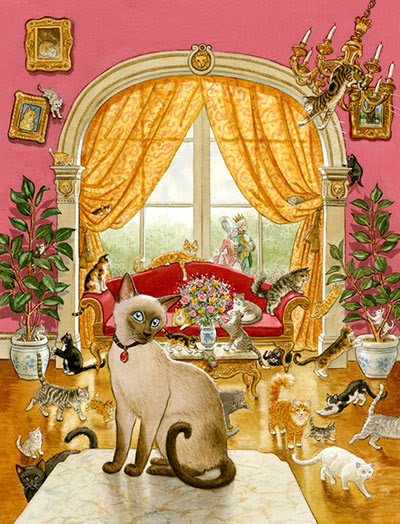 and suggested I make the wall pink…Here is the revised cover, with the pink wall painted in acrylic on top of the maroon color. Yes, it was very time-consuming to paint around all those details. But we are not done yet! After giving the art to the designer, problems arose.
A note—The marketing folks asked that the title be changed. I coined the word "Castleful," to indicate there were a ton of cats in the castle, and am very proud of it, but apparently anyone searching for a book with "castle" in the title would not find my book, so we had to split my word to "Castle Full." Inside the book it is still "castleful," read as one word, like "spoonful." 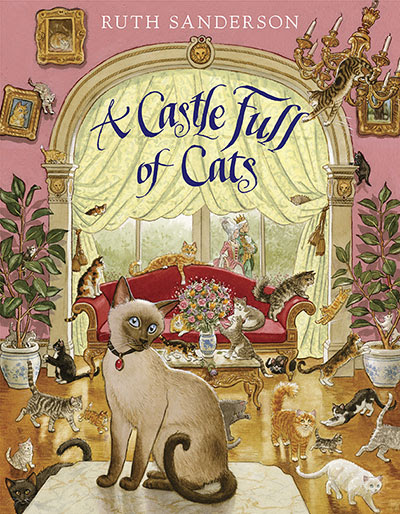 The designer was having a very hard time making the type stand out against the background. The art directer even photoshopped the curtains to make it simpler, shown here, but it just looked too busy. In addition, she felt that the pink wall was too bright. When she and the editor approached me about making yet more changes, and major ones, to the artwork, I agreed. The cover was simply too busy, as you can see. I had to fix it! And I decided on a blue for the wall to make it recede more and focus interest on the bright center of the illustration. 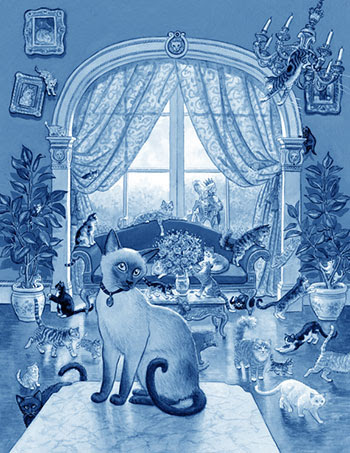 I started with the full size digital image of the cover, because changing to a blue wall would not be easy. I really did not want to put a third coat of acrylic paint on that wall! SO, I started in Photoshop with my pink cover image. I duplicated the image as another layer and changed the whole picture to blue, and then painstakingly worked to combine the two layers into one. 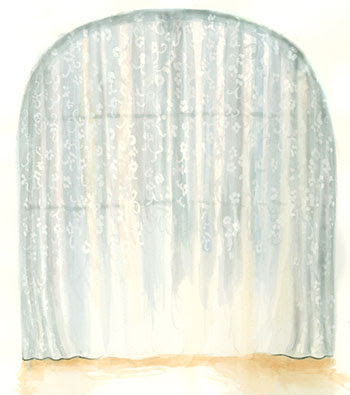 I painted a new window with a single sheer curtain in watercolor on a separate piece of watercolor paper, no king and queen, then scanned and Photoshopped it in so the type would hopefully read nicely on top of it. 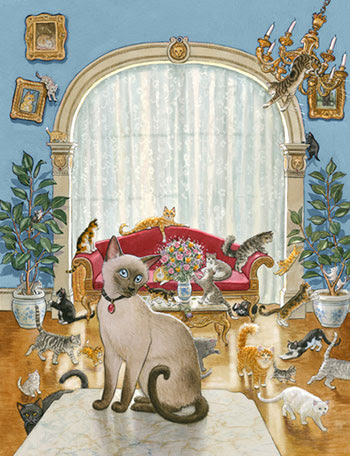 Above is the final image with the blue wall. I was a bit sad that the king and queen can't be seen outside, but feel the title reading well was the most important concern. And the cats are the stars of the book. 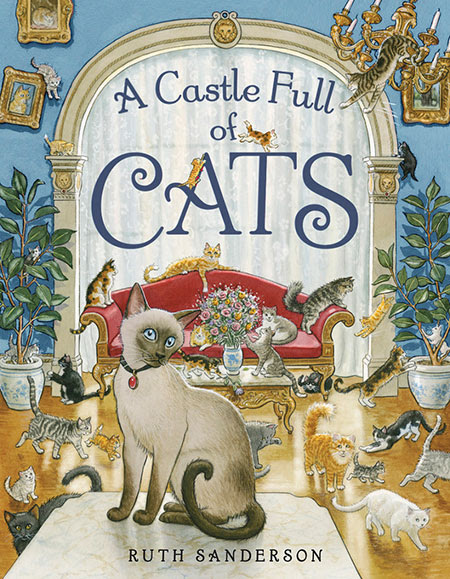 A week later....here was the (almost) final cover design. I loved the new typeface the art director chose. Note the kitten kicking the word "of" in the title! The type color was still under discussion, but this was VERY close to perfect! After some discussion, it was decided that the word “cats” would stand out more in a shade of red that matched the couch, and that was the color chosen for the final design. [See the very top image.] My art director Nicole de las Heras from Random House did such a marvelous job on this, and was so patient and easy to work with, through all these changes. It really helps to have a great team to work with at a publisher, to make a successful cover design.

Thanks so much for stopping by, Ruth! To see more of Ruth's amazing work, check out her blog!
at July 30, 2015

I just read this to my fourbyear old neice last nice. She picked it up from her local library with her mom
What a feast for the eyes! Luscious setials abound. How did you stay sane drawing all of those cats?!

It is a feast for the eyes, isn't it? I don't know that Ruth will chime in, but I will say, she's a stickler for detail - it's just how she works! :) e