That's the nickname for Edinburgh. According to Wikipedia it's because...

when buildings were heated by coal fires, chimneys would spew thick columns of smoke into the air. This created a haze over the city when viewed from a distance.

I imagine it didn't smell too good, hence the nickname.
These days Edinburgh still has a distinct smell, but it's not of coal smoke. Most days Edinburgh smells like yeast from the distilleries that work in and around the city. It's a bready smell, like you could chew on the air, and yet there's a slight sourmashness to it. It's hard to explain, but it's something that has definitely become a familiar sign of our new home. I like it. 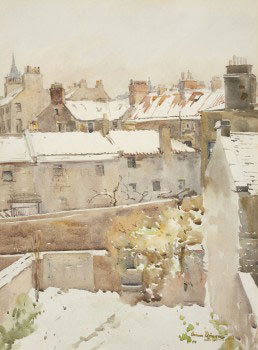 On another note, I stumbled across an interesting art project commissioned during WW2 to keep artist's busy. It was called Recording Scotland. Artists set out all over the country to paint and record images of day to day life. My favorite is this one of our very street - Broughton Market by Anna Dixon. Our building was built in 2008, so isn't in this image from about 1920-1942. But that building facade in the upper left is the view out our dining room window, so I know exactly where this is. How cool is that?
at November 11, 2015