PhD Courses and my topic! 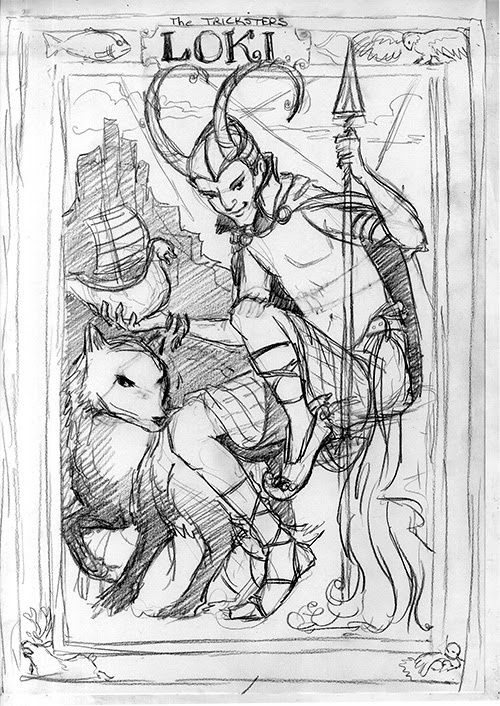 I haven't spoken much about my PhD research so far. I think I didn't believe it would all actually happen. I mean, I'M DOING A PHD at the UNIVERSITY OF GLASGOW!!!! Gadzooks! In fact, I'm solidly into my first year taking four courses: Advanced Research Methods, Social Theory (including Feminist Theory), Children's Literature and Literacies (Cricitcal Enquiry), and Developing As A Teacher in Higher Education (DAT HE). SO INTERESTING!!!
At any rate, my topic is starting to settle down. As in, I don't change the title every day. (HA!) It's "Gender Bias in Children's Literature Through the Lens of the Trickster."
"Trickster," you ask?
Here is my background, straight from my proposal:

Tricksters, a term Brinton popularized in Myths of the New World (Brinton, 1969), such as Loki (Figure 1), Hermes, Coyote, Anansi, and the Devil, are well-known, mythic characters. Yet, few females are identified as tricksters. Freya, Kitsune, and the Cailleach Mohr/Beira are examples, however, these female goddesses have mixed functions and are not as definitively identified as ‘tricksters’ as are their male counterparts.
Further, in early interviews, Scottish storytellers and professors of Scottish Studies suggested there are no Scottish tricksters. While the Bodach and the Wild Man could be declared as Scottish tricksters, it was relayed that most tricksters in Scottish culture derive from other cultures and are not specifically Scottish. The question arises then, where are the Scottish tricksters?
More specifically, where are the Scottish female tricksters?
In the pursuit of identifying Scottish tricksters, especially in children’s literature, a disturbing trend reveals itself. The empowering male trickster traits of cleverness, craftiness, wit, shape-shifting, and manipulation are vilified when found in the female. She is instead called witch or witch goddess, such as the Cailleach Mohr/Beira (the Hag), Nicnevin (the Queen of the Fairies), Hecate (the leader of the Wild Hunt), or Morgan Le Fay (of Arthurian legend).
Miranda Green confirms that, “Most of the female shape-shifters were associated in some manner with witchcraft” (Billington, 1999, p3). Catharina Raudvere agrees: “the connection between women, sexuality and witchcraft appears to be a globally observed pattern” (Billington, 1999, p47, p52). This thesis will explore this theory within children’s literature.
A second disturbing trend is that tricksters as shape-shifters can become either sex, yet most tricksters only become women to perform certain gender-specific acts. “Even his [the trickster’s] sex is optional despite its phallic qualities: he can turn himself into a woman and bear children” (Jung, 2003, p143). As in the story of Coyote as the creator of life, the trickster does not stay in female form beyond child-birth. This function-specific role-play designates the male as all-powerful, even as life-creator, relegating the agency of women (and young female readers) to a culturally hegemonic power structure, subordinating them to the status of ‘subaltern’, a post-colonialist term initially used by Antonio Gramsci to describe those who have been written out of a societal narrative. As Gupta Spivak contends: “…the ideological construction of gender keeps the male dominant. If in the context of colonial production, the subaltern has no history and cannot speak, the subaltern as female is even more deeply in shadow (Spivak, 1988).”
Hence, this thesis will concentrate on this trickster lens within children’s literature. Because, as Susan Rowland says, “Trickster is both a net for symbols and a symbol himself. Such symbols are ways of detecting nature in ourselves, and are the fabric of our weaving of self into the cosmos” (Rowland, 2011, p126). If that is true, then where does that leave women in the fabric of the cosmos? Can a woman be strong in her own right, through her own cleverness and wit, a true trickster? Can this pattern of patriarchal bias be reversed or reworked by modern writers?


To sum it up, my AIM is to: analyse and identify representations of gender bias through the lens of tricksters as they impart patriarchal ideology and influence in children’s literature, and to seek out and identify female tricksters through their identical archetypal traits and story tropes. I will “recirculate a mythic notion of the feminine” (Butler, 2015, p35) in a more positive and empowering manner through the creation of a feminist trickster tale in a practice-based, young adult, literary fantasy, Two Lies and a Truth. The novel will be both a tool for analysis of ideologies, as well as a craft application of these theories; because, as Marina Warner says, “Who tells the story, who recasts the characters and changes the tone becomes very important: no story is ever the same as its source or model, the chemistry of narrator and audience changes it” (Warner, 1995, p418).

You'll notice from the citations that I am having to do some FASCINATING reading for my topic, such as Carl Jung, Judith Butler, and Marina Warner. I'm happy to share my bibliography if asked - it's long! Meanwhile, I keep reading, researching, writing, and having a blast studying things I've wanted to study my entire life and finally have a solid reason to pursue it. LOVE!
at February 12, 2018

First, let me congratulate you on pursuing your Ph.D. And to research such a fascinating subject. Just reading your synopsis is magic. This seems so timely with the women's movements happening today. Women are finally, after several thousand years, changing our position in society.

In my book GREY HEROES, there's an Innuit tale about a grandmother who takes her granddaughter under her wings, turns herself into a man,marries the daughter and has sex with her until a handsome REAL man comes along, and takes the girl away. Grandmother turns back into a female and is all alone. If you don;t have a cpy or can't get one, I will xerox and send the story to you.

Thank you, Lynne! And yes, please, Jane - thank you!!! I asked my supervisor if it was okay to put my proposal out in the world like this and she said 'maybe folks will send you some tips'! Indeed! :) e

Very interesting read Elizabeth! I love reading books especially in the realm of fantasy and folklore, and the tricksters of theese worlds are some of the most interesting and funniest to get to know :) I had not realized they were almost all men though! But when reading this, I look back and yes, the few female characters that could be characterized as a trickster, are mainly evil and witch-like, and not at all as charming and likeable as the male tricksters.. But times they are a (hopefully) changing! :)

Best of luck with your PHD and fascinating topic!

I think the idea of creating a female trickster sounds like a fantastic way to clarify your discussion!

Tindaloo - I'd love to hear some of your primary examples! :) e

Hope you'll share some of what you learn with us. I have observed this before (I love mythology) and have been constantly amazed at how easily humankind converted from worshiping goddesses to vilifying women. Interesting...