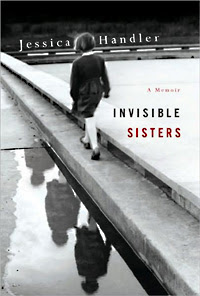 Today marks a milestone. Today is the official release of Invisible Sisters, a memoir by my good friend Jessica Handler. Her home-town launch party is tonight at A Cappella Books in Atlanta (she'll also be at the Margaret Mitchell house next week). Please visit their site for details, but to quote the write-up:

Jessica Handler grew up in Morningside in the 1960s as one of three daughters of a progressive Jewish family. By the time she was nine, one of her sisters had been diagnosed with a rare blood disease that would kill her at a young age and the other had died from Leukemia. From this unimaginable family tragedy, Handler emerged and now shares her stirring story in Invisible Sisters, a memoir published by Public Affairs Books.
Based on a Pushcart Prize-nominated essay, this clear-eyed, candid work portrays the immense emotional toll that two daughters' illnesses take on a family living in Atlanta.
The family's move to Atlanta in 1965 allowed the father to support labor unions, and Handler, as the oldest, was alerted to the importance of demonstrations and even taken to the funeral of Martin Luther King. However, with Susie's diagnosis (compounding the worry over Sarah's chronic sickliness), the parents "began the slow and terrible turning away from one another that erodes families facing the death of a child."
Atlanta Magazine's Teresa Weaver compares the book's "lyrical elegance and cool remove" to Joan Didion's The Year of Magical Thinking-- "the highest praise possible for any memoir of loss."

As if that wasn't enough, Jessica also had a recent article in Newsweek: "I Won't Roll the Biological Dice."

I had the great honor of being one of Jessica's readers as she struggled through writing this epic and moving story. It's personal and scary and Jessica and I enjoyed lots of lunches out as she worked through the angst of its creation. However, it's all paying off now and I am so happy for her. Critical response has been incredible as well as the attention she and the book are receiving. Of course, this is no surprise to me as I've been a fan for a long time now.
CONGRATULATIONS JESSICA - well earned, my dear!!!
at April 30, 2009