The Jack Tales and Storytelling... Part 1

I'm going to tell you a story which began back in 1975 - for me anyhow. My grandparents, who lived in Lexington, Virginia at the time, gave me a book called THE JACK TALES: FOLK TALES FROM THE SOUTHERN APPALACHIANS COLLECTED AND RETOLD BY RICHARD CHASE. (Remember that name - it's important.) I called my grandparents Gammeo and Pop-pop. After all, I was only eight years old. They dedicated the book to me. 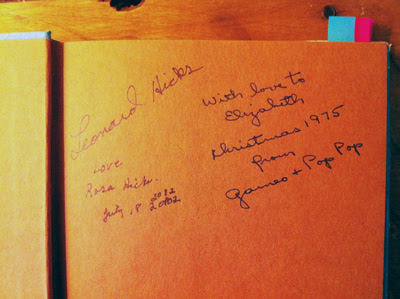 Little did they know, that book would begin a lifelong interest that has never waned. But more on that soon...
Have you heard of Jack Tales? You're probably familiar with Jack and the Beanstalk. The story was originally told in Europe, Ireland, Scotland and Germany. But then it got on a ship and sailed to America traveling with three families in particular - the Harmons, the Hicks, and the Wards - on that very next ship after the Mayflower. The three families headed up into the Appalachian mountains - Boone Mountain in North Carolina to be exact. One of them even traveled with Daniel Boone himself.
It was a steep and rocky terrain and wasn't an easy place to live, so there weren't many outside influences on the families for many, many generations. As much as that turned their family tree into the shape of a wreath, it also preserved the culture they brought over from the old country, the skills and the dialects. Up there they spoke with an old Elizabethan drawl, saying "yu'uns" instead of "y'all," or "cloomb" instead of "climbed." They farmed their rocky land for potatoes and beans. They gathered herbs and greens like ginseng and galack (colt's foot). They put up corn and leather britches for the winters, and they told Jack Tales through it all.
The stories evolved as each teller told them a little differently. Eventually Jack became a clever mountain boy, barefoot in overalls. He tricked the devil, robbers, and witches. And Jack and the Beanstalk became Jack and the Giants in which he fought multiple giants with multiple heads.
Jack reentered my life in 1988. For my exit show in Graphic Design at the University of Georgia I had to present ten potential topics to my Professor. How could I have known he had a dear love of Jonesborough, Tennessee and their annual National Storytelling Festival? I ended up doing a line of posters on the festival - like "Monster Tales, Fairy Tales," and of course, "Jack Tales." There were a lot of rear ends in the project but I still got an A.
To research the project, I attended the storytelling festival. There I heard Ray Hicks tell Jack Tales in his Elizabethan dialect that was so thick, I could barely understand him. But it was clear I was experiencing a great and special moment. Indeed, Ray Hicks was declared a National Treasure in 1983 for his telling and preservation of the Jack Tales. I drew a portrait of him while he told, which I then asked him to sign. It took him a while, as I don't think he could write all that well. (His signature is the second one.) I keep it framed in my home and it's one of my dearest treasures. 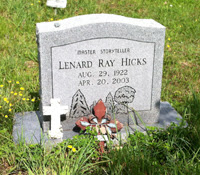 Sadly, Ray passed away a few years back. The oral storytelling tradition passed to his sons Ted and Leonard Hicks, and his nephew Orville Hicks...

But now, I started this story with a book by Richard ("Dick") Chase. His story began in the early 1930's as a song catcher. In sharing his knowledge of folk songs, mainly gathered from Mrs. Jane Gentry by Cecil Sharp, a man by the name of Marshall Ward (remember the Wards?) spoke up and asked him if he knew about the Jack Tales. He didn't, but quickly remedied that!
Richard Chase hiked up into the Appalachians and collected Jack Tales and Grandfather Tales passed down through Old Counce Harmon. To this day his books (like the one above) remain the primary written records of the Appalachian stories that Ray Hicks and his ancestors told.
We also lost Dick a few years back, but his daughter Anne is still with us, although in her 80's. And this is when the stories enter my life once more...      More tomorrow.
at July 22, 2012

Love oral history/storytelling... what a fascinating post. look forward to the follow-up tomorrow.

Oh wow, I'm totally seeing how this book is gonna start out!