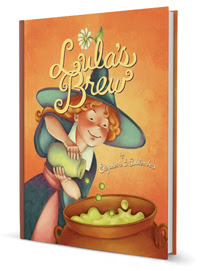 You, yes YOU can win a free hard cover copy of LULA'S BREW, signed and dedicated to your favorite witchie!!! And the drawing will be ON HALLOWEEN - how's that for a Trick-or-TREAT!?
I usually host other people's books with interviews and giveaways on Thursdays. Well, this Thursday the giveaway is mine. And I'll share some little known factoids about LULA'S BREW...

Did you know that LULA'S BREW has been in the works since 2007? Yup, maybe even longer. She was one of my earliest book dummies. The art was created as pencil drawings, which I then colored digitally in Photoshop.
Art from the dummy won me a Grand Prize in the SmartWriters.com competition! I got a trophy and everything!

Did you know that LULA'S BREW was an APP before it was a book? Yup, one of the very first children's picture book apps for the iPhone and later for the iPad. I even did the voice for the apps! (And learned that it's a bad idea to eat Indian food before doing a voice recording.)
I wrote an article about my experiences with Lula for the SCBWI Bulletin (the Society of Children's Book Writers and Illustrators): "My 1st iPhone/iPad Picture Book App." I gave talks at conferences and even did some very high-tech school visits. LULA'S BREW was cutting edge back then.

Did you know that LULA'S BREW is available not only in hard cover and paperback, but also for the iPhone, iPad, Kindle, Kindle Fire, Nook, and as a pdf? CLICK HERE for links to them all.

Did you know that LULA'S BREW is still breaking new ground with Xist Publishing's publishing model? All of Xist's printed books are are produced using print-on-demand resources. (They aren't actually produced until orders are placed.) It cuts down on waste, warehousing, and may be the wave of the future for publishing. This is definitely something to keep an eye on!

Did you know that one of my best fan emails ever was from a mom whose little girl dressed up as Lula for Halloween? BREAK my heart to little pieces!!! OMG!

Did you know I have LULA'S BREW coloring pages, a word-find puzzle, computer wallpaper, and the actual recipe for Lula's Brew? Yup - CLICK HERE!

GIVEAWAY
Must live in the continental US to win. The drawing will be held next Wednesday - on HALLOWEEN!!!! Trick-or-treat!
a Rafflecopter giveaway
at October 25, 2012

I'd love a copy of "Lula's Brew" to put in our school library and share with my students. It looks like great fun!

I'd love a copy of your Lula's Brew to share with my children. Especially my little one. She just loves books like this and the pictures in them. Thanks for a chance.

I'd love a copy of Lula's Brew to put in our school library! It's a beautiful peice of work!

This book looks so adorable, I just love the cover illustration!

Please put my name in the drawing too. I loved the back story-thank you for sharing. I would read this book, share with my kiddies, then donate to the school library. Yes, really.

Cuteness!! My daughter would love this!

My 2 year old grandson loves books and I think he'd love Lula, I know grandma would love to read it with him! Thank you for the chance!

I would love a signed copy of "Lula's
Brew". This book would be cherished by my children and grandchildren alike!
Thanks for the chance Elizabeth!
Hugs,
Georgia

I know my daughter will love this story! I just looked up the iphne app. It looks great too!

I have lulas brew on my kindle, it's the cutest story ever. Thanks for the chance to win such a fabulous prize. - angela mireles