17 Bookstores That Will Literally Change Your Life at BuzzFeed - you've probably seen some of these before, but some are new. (The children's section of "Cook & Book" in Brussels is pictured below.) 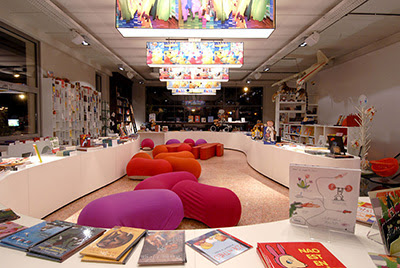 Via PW and The Hollywood Reporter: 'Fault in Our Stars' Ripple Effect: Success Breeds New Rush of 'Grounded' Teen Movies - Move over vampires and wizards: The new IT genre is "grounded" young-adult book adaptations. (I like this - it bodes well for A BIRD ON WATER STREET!)

Matt Faulkner was the other creator tagged by Mary Jane Begin in last week's blogtour. It's worth the read:
at June 20, 2014