Storytelling in our Wee Flat

A lovely thing has circled back into my life here in Edinburgh - storytelling. I did my exit show in college on the National Storytelling Festival in Jonesborough, Tennessee, and you may have read about my history with Jack Tales, so it's lovely to have this element back in my life again.
The Scottish Storytelling Centre is a very big deal here in Edinburgh. The country is full of storytellers after all. In fact, the Centre is located in the heart of the Royal Mile on High Street - a most venerated location! I was eager to get involved both because of my background and because of the project I've taken on for my MFA Thesis about Tricksters - those clever characters who exist in most cultural storytelling histories. (More on that soon.)
Recently, Stan and I bought tickets to go see the most famous storyteller in Scotland, David Campbell, in an attempt to bring these stories back into our lives. (I blogged about David HERE.)
But then we got sick and couldn't go. PAH!
But THEN, a few days later when I was feeling much better, lo' and behold, I ran into David in the mall of all places!
"YOU'RE THE STORYTELLER!" I blurted and nearly accosted him. He was so kind. We had a brief, yet lovely conversation while holding up foot traffic in the perfume isle. I offered to buy him lunch (and to quiz him about Tricksters) and David kindly shared his contact information. First, he had to go tell stories in Ireland, but two weeks later I emailed him as "The strange lady from the mall." I was able to make good on my promise. Which led to... 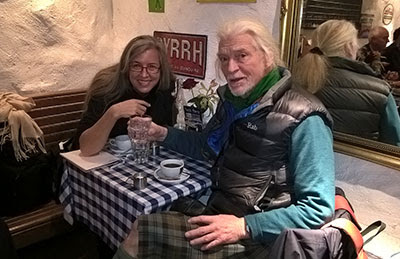 We had lunch in a sweet little French restaurant, Le Petit Paris, in Grassmarket where I interviewed him about Tricksters. Folks at the nearby tables started looking our way, figuring out they were in the presence of a celebrity. Nervous flirting and gracious laughter ensued. Personally, I had the oddest feeling I had made a life-long friend right then and there. (David reminds me a bit of Doris Abernathy - to whom my novel, A Bird on Water Street is dedicated.) Which led to...
A local documentary cinematographer and director, Leo Bruges, was wanting to shoot three of the nation's top storytellers all telling the same story, which he would later loop together. The storytellers are David Campbell, Duncan Williamson's widow Linda Williamson, and apprenticing storyteller, Joshua Bryant. (He's all of 18 and very, very good. And just like Duncan took David under his wing, so has David taken Joshua under his wing.) 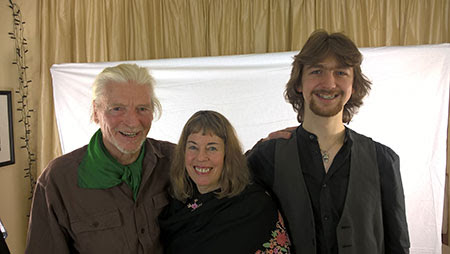 Leo was going to film in David's flat like they did for the documentary I linked to above. However, David's flat is on a main street, which means busses, and there was construction going on nearby. Which led to...
Wednesday! I wasn't able to go to school anyhow as our finals are in and are being evaluated - the studio is off limits to students as they grade. So the timing worked out perfectly for the documentary to be filmed at our flat. Stan and I were completely honored to have the renowned storytellers being recorded for posterity in our home!
The filmakers, Leo Bruges and Sandy Harris arrived about an hour early to start setting up. Our flat went from normal looking to soundstage in no time. 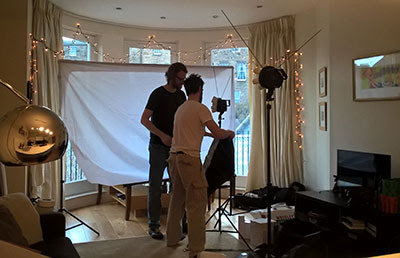 When the storytellers arrived, along with photographer friend, Dennis Newton, there was much chattering going on. 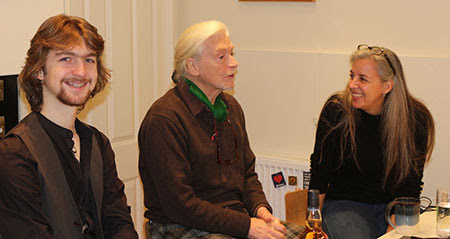 But soon, everybody got down to the business of telling the story "The Fair Maids Tresses" as told by Duncan Williamson.
It's a heart-breaking story of two sisters in love with the same man and how one sister's jealousy changes everything. 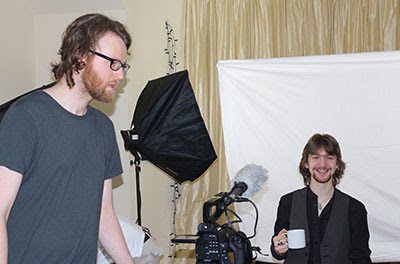 Here are Leo (standing) and Joshua (sitting) getting ready for Joshua's stint.
Linda spread her shawl like a bird, looking just like the cormorant from the story, and sang the Gaelic enchantment song - which enchanted us all. 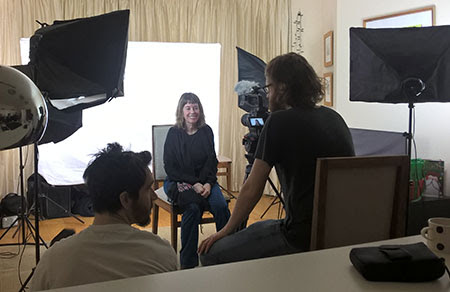 David used his amazing skills at drawing visuals and connecting with the invisible behind-the-camera audience. (And yes, he wears kilts most of the time.) 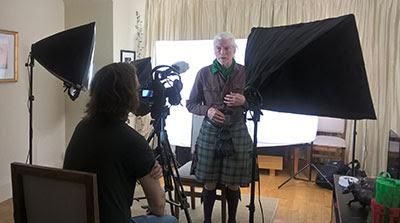 And Joshua pulled us in with his steady pacing and legacy storytelling skills. (His mother is the equally famous Beverly Bryant.)
Meanwhile, Stan and I got to sit back and watch our flat transformed into a magical arena of storytelling history recorded for archives and future generations. (It will also be on YouTube - I'll share the link when it goes live.)
Just like Leo (right) and Sandy (left), 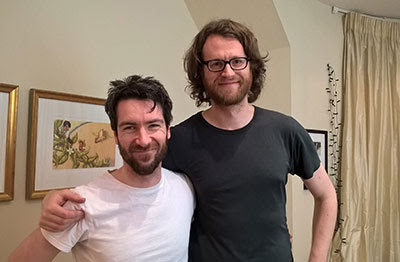 Richard Chase did a similar thing for the Jack Tales in Appalachia, and generations later, I am so grateful that he did. As did the Brothers Grimm in Germany. So, Stan and I felt a part of a true and similar happening - history in the making. What an honor!
And now for our next get-together... David, Joshua and I will have lunch next week at the best Indian restaurant in town. I told you I'd made friends - oh, what lovely friends! 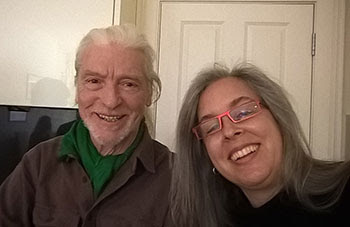 Thank you for sharing your story with us. What an adventure!

Thank you dearest Elizabeth and Stan for such a lovely day, you are truly great hosts!
'What makes a good story is a good listener'(quote from Duncan himself); and even though we were asked not to look at our immediate audience, oh so very difficult for a storyteller!, your rapt attention and interest in what we were doing made the whole afternoon possible. Please keep in touch and all the best with your trickster studies. Let me know if I can be of any help in your Scottish research. Duncan and I published many Jack tales and surely Jack must count as the arch trickster who outwits the devil and is the lad who, like none other, overcomes many an adversary in the rich land of European folklore.

Linda - it was an absolute pleasure - truly! I look forward to talking more - I have questions! Hugs, e