The University of Edinburgh has an awesome idea - one week every year the school opens up for students (and visitors) to try something new. It's called Innovative Learning Week. The idea is that an art student can go attend a law seminar. A medical student can go take a glass blowing workshop. TED was actually an Innovative Learning Week-based activity. Basically, they want folks to try something NEW! I didn't stray too far out of my comfort zone because I was busy preparing for TED (which was new for me!), but I did attend a Picture Book Workshop on Friday, hosted by Robbie Bushe, Janis Mackay and my bud, Kasia Matyjaszek.
As in most picture book environments, fellow MFA Illustration student, Boris ended up being the only male attendee out of 40 - turns out it was the most popular workshop on campus and nearly 30 people were on the waiting list! I'm glad we got in!

Kasia laughed when she saw me there. She said, "You don't need this!" I said, "I can always learn." In fact, I have a new theory developing... I think you can only learn so much about writing novels - it's more of a 'just do it' exercise. However, you can always learn more about creating picture books. They are such a complicated art form! And truly, I learned so much on Friday! 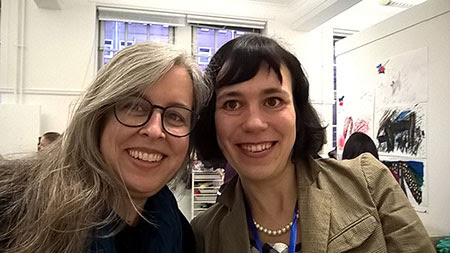 Kasia (pictured above) has become my artistic muse, making me try new media and embrace my inner child. (Not as easy as you might think.) Janis got me back in touch with the Hero's Journey a la Joseph Campbell. I always knew the structure applied to novels, but I'd never seen how it applied to picture books so clearly until this workshop.
But I'm getting ahead of myself. Here are some of the wonderful things we did. First off, we were given an envelope full of randomly cut pieces of colorful paper and asked to create a character with them. Mine gave me two, Beast and Birdie: 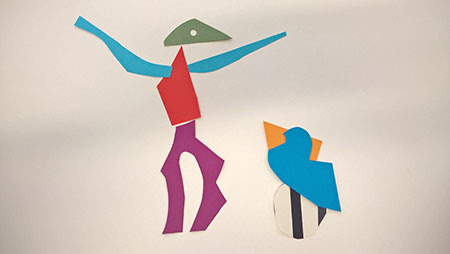 We were asked to draw our new character/s and then take them on a journey - for each stage we were handed another piece of cut paper to inspire us - and it DID! Who knew cut paper could be such a powerful imagination trigger?
Janis took us on a writing journey with our new character/s. We created storyboards in the most economic way I'd ever seen. Why didn't I ever think of wide sticky notes, which can behave as replaceable spreads? 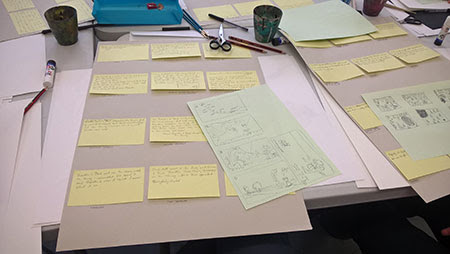 Back to the artwork, we put our character/s into scenes and created one spread using all manner of supplies. Kasia likes to play when she works, and she made sure we did too! 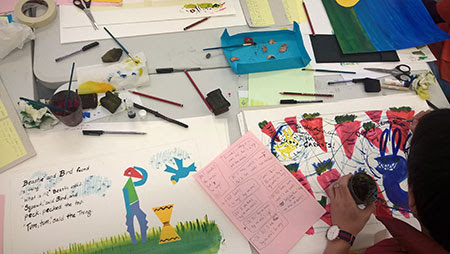 We had a blast, and I discovered colored inks - LOVE! At the end we had a show to display our creations (with Prosecco - how evolved). 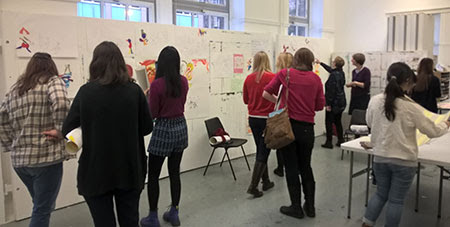 Boris and I proudly shared our accomplishments. 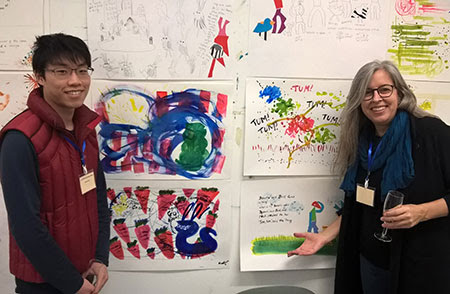 Surprisingly, I actually came up with a story I want to fiddle with some more. Cut paper, cut paper, cut paper! Brilliant inks and be sure to make a mess. Who knew it could inspire so much? Maybe you should try it too!
at February 24, 2016