I remember going to the Kindling Words conference in Vermont and seeing early sketches and story ideas for Sarah Dillard's MOUSE SCOUTS, so I am thrilled to have her on today to talk about these adorable books which are finally in print! 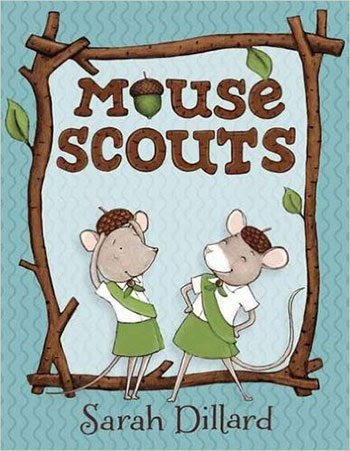 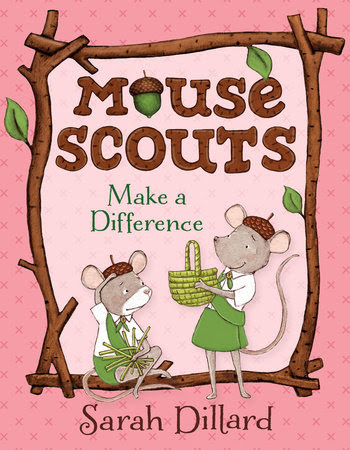 Mouse Scouts took a long time to write. It started as a picture book, spent some time as a graphic novel and finally found its place as a chapter book.
In the beginning they weren't even scouts. There was just Violet and Tigerlily, two mice who were best of friends but very opposite. I loved the characters and wrote many different versions of their story, but something just wasn’t working. One day I was talking about it with my agent, the fabulous Lori Nowicki. She said that they really needed something to do; just being best friends who were opposite really wasn't quite enough to sustain a story. We bounced some ideas off of each other, and then one of us, I can't even remember if it was me or Lori, said MOUSE SCOUTS! From that point on, that was what they were. 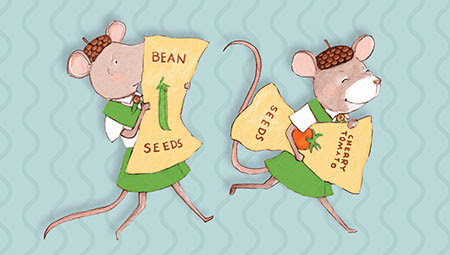 I was never much of a Girl Scout myself. My older sisters were both scouts and I was fascinated by their Girl Scout Handbooks and their badges. I couldn’t wait to be a Girl Scout myself. I was so proud when I was finally a Brownie, and I remember how magical my Flying Up ceremony felt. But Girl Scouts itself was a disappointment for me. At meetings we talked about hygiene and made macaroni necklaces.   There was a miserable sleep over at Camp Green Eyrie, our local Girl Scout Camp. It was cold, damp and smelled like Pine Sol. We slept in musty sleeping bags, in cabins with dirt floors. For breakfast there was gluey oatmeal with cold hard raisins. I never earned many badges, but I remember taking some off of my sisters’ badge sashes and sewing them on to mine. I was not a very good Girl Scout and it wasn’t long before I drifted away from it.
So before writing Mouse Scouts I felt that I really had to do some research about what scouting was all about. I got a hold of the current Girl Scout Handbook and Badge book and read it cover to cover. On a visit to my husband's parents, we found his old Webolos and Wolf Scout handbooks. I felt like I was starting to get a grasp of scouting but something was missing. Then one day we were at a flea market and I found the exact same Girl Scout manual of my sisters that I had loved. All of my early memories of dreaming of being a Girl Scout came back. 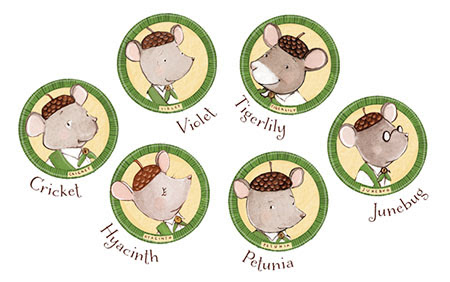 Originally, Violet and Tigerlily lived in a world of mice. They had computers, bicycles and all of the accoutrements of their human contemporaries. Other than their appearance, there really wasn’t anything mouse-like about them. I started to wonder what it would be like if they were mice living in a human world. It was a hard decision at first. There were many things that I liked about their mouse world that I would lose if I put them in a human world. It was like reaching a fork in the road, and I struggled for a while deciding which direction to go in. But the more I thought about it the more I realized that mice living in a human world would be much more interesting. It would emphasize the mouse like aspects of Mouse Scouting and serve to differentiate them from Girl Scouts. I drew on my memories of books like the Borrowers, The Rescuers and Stuart Little.
The art for Mouse Scouts is black and white, except for the covers. This was something new for me, but I thoroughly enjoyed working on it. I started with pencil drawings, using water soluble graphite pencils. I love how you can go into the drawing with a damp brush and get wonderful gray tones. Then I put the drawings into photoshop to clean them up a little and make them richer. It has been fun playing with working digitally and it turned out to be a godsend for me. Soon after I started on the art for the first book, my mother became ill. I found myself dividing my time between my home in Vermont and Massachusetts caring for my mother. Working digitally meant that I could just pick up and go at any time and set up shop where ever I happened to be. 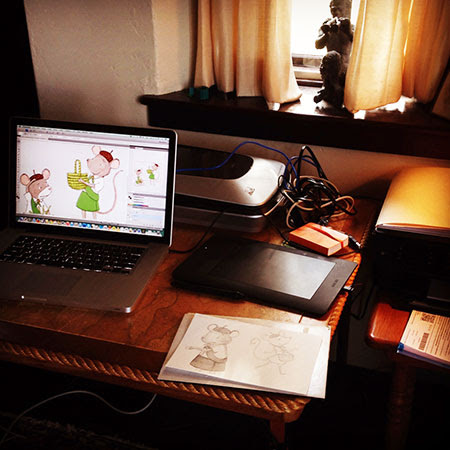 Spending so much time in the house where I grew up gave me a window to my childhood self. While going through things in the attic I came across some mouse dolls that I treasured as a child. They now sit next to me while I work. They are a great reference for scale. One day I was looking at them, remembering how I used to play with them in the woods, taking them on camping trips and other adventures. I realized then that in many ways my life hasn’t changed very much since I was eight. 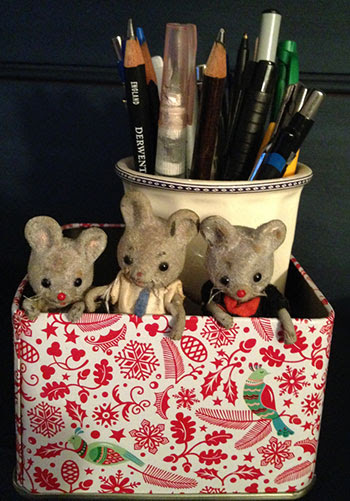 These look adorable! I've requested them for purchase at my library!