I have to admit we live near the best square in Edinburgh - St. Andrews Square. I walk through it almost every day on the way to pretty much everywhere, and there is always something going on in our wee square at the top of the hill. Maybe because the main bus station faces it, or maybe because it just has a kick butt planning committee - I'm not sure. At any rate, the latest 'something' is a fabulous art installation piece called Keyframes. 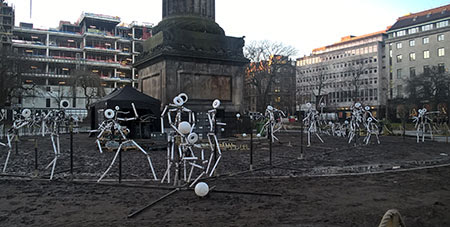 The grass in the square was pretty much decimated from the Christmas village over the holidays. (I told you about that here.) So they brought in artwork that works best at night. About 50 light bulb figures are posed around the Melville Monument (which commemorates Henry Dundas, the first Viscount of Melville). The artist put black roofing paper on the ground surrounding the figures (hiding the dead grass and mud). It's interesting to study the construction of the piece in the daylight, they are engineering marvels of wire and glass, but the artwork really comes alive after dark.
And this is what I love about this town... so I'm walking home from class one night, and I've just entered the square. It's usually not lit up. Suddenly, this big booming music startles me and the figures start to light up, dancing and jumping and grunting, around and around. Some are doing cartwheels, some are doing summersaults, some are playing tennis, one is running up the side of the monument and flipping. The whole thing comes to a brief interlude with a couple on a bench, snoring as they rest in each other's arms. It's impossible to relay the work through still photos, but I tried.

So, instead of trying to capture the art, I tried to capture the crowd. Casual passers-by who stop in their tracks and gather to watch this magnificent thing.

The artwork is bringing so much JOY to people during a usually dull time of year - because, why not? We all deserve to be happy. And that is a core belief that underlies everything here in Edinburgh!
Share on twitter: #EdinLights.
at February 17, 2016