I've been collecting gloves. Well, pictures of gloves, at any rate. You know how I go on and on about how nice people are here in Edinburgh? Here's proof.
It gets windy here and folks are constantly dealing with layers of hats and scarves and gloves. You're bound to drop something at some point and have it blow away. But rather than getting trampled, oftentimes, somebody will pop your lost item on a fence tine in the hopes that you'll be back by that way to reclaim it. 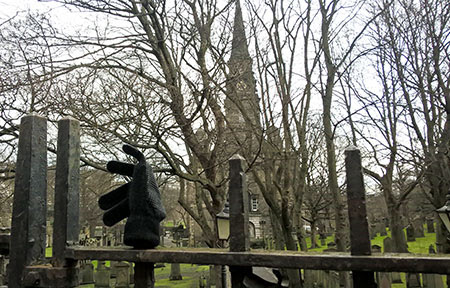 Every time I see one of these, it makes me smile. It's like a polite little, "Did you lose this? Here you go." (Said in the sweetest Scottish accent.) It's a lovely act of kindness and I see it all the time. 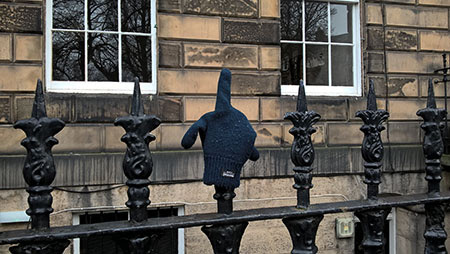 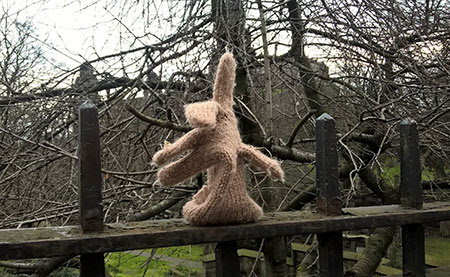 (That's the castle behind this pink glove, hidden by the tree branches.)
Heck, once I even saw an entire outfit. It started with the tie.

And was followed by the shirt and the pants. Not sure what that was about, it was on Rose Street after all, which is a bit of a party central after hours. At any rate, even the pants were nicely folded and placed over a rail (you can see them behind the tie).
Just the other day I became part of the process... I found a sweet little pink mitten that some little girl was bound to be missing. So I put it on a windowsill where she might find it. 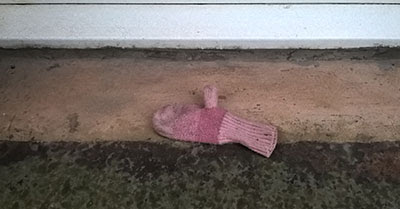 These found items make me happy, so I'm going to keep collecting photos of them.
at February 10, 2016