There are secret gardens tucked in and around the city of Edinburgh. I've been trying to slowly find them. While walking down the Royal Mile from the Tour of Britain bike race, I happened to look left and saw the sign of "Dunbars Close." Somehow, my mind remembered to stick the word "Garden" onto the end of it. "We have to check something," I said to Stan and pulled him in. And I was right! This is what we found. 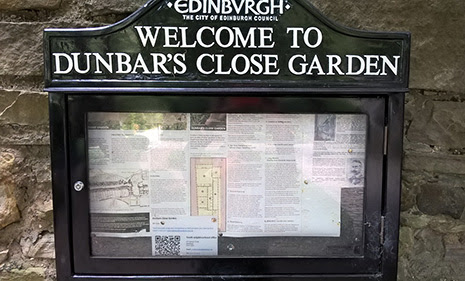 The website says it best.
Dunbar’s Close on the Royal Mile in Edinburgh’s Old Town is a hidden gem. The garden has been laid out in the style and character of a 17th century garden. 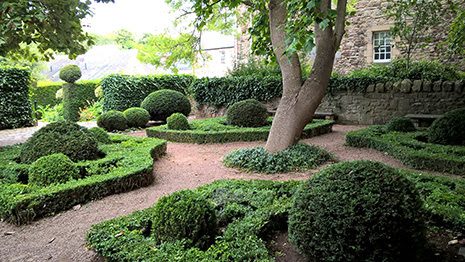 To enter you travel along a narrow, cobbled close. 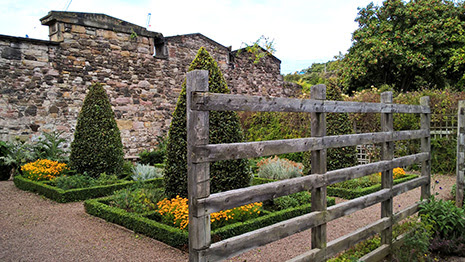 It opens out into a surprisingly tranquil and elegant parterre of clipped shrubs under a cosy green canopy of trees. 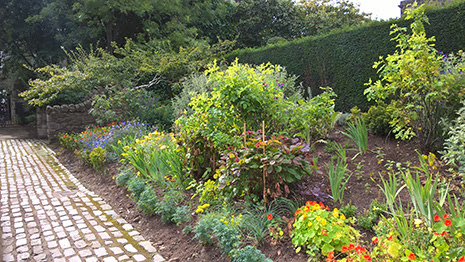 Beyond the entrance are further parterres, each with different atmospheres and all are sheltered thanks to high church walls on the west side and clipped hedging on the others... 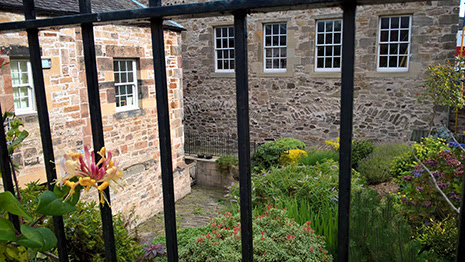 It has such an authentic sense of place that you feel like you are one of the few to have discovered it. 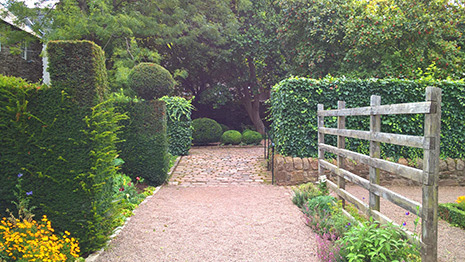 It is hard to believe that somewhere so peaceful, so city centre, was a building site until 1976 when The Mushroom Trust funded the creation of a new garden by Seamus Filor, landscape architect. 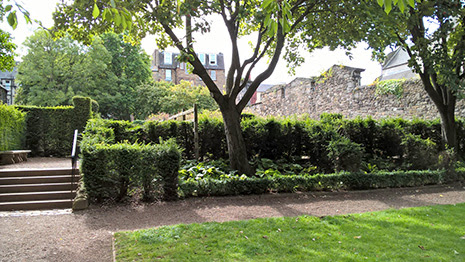 The Mushroom Trust handed the garden over to the City of Edinburgh on completion and is still involved in its management. 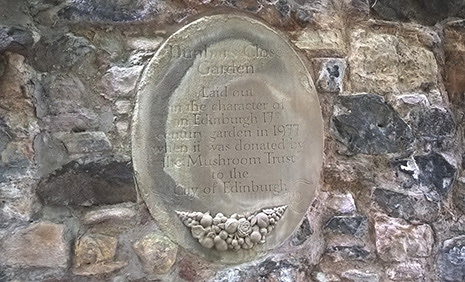 I like to think that finding this sweet little garden, hosted by The Mushroom Trust was a reward for what happened on the Royal Mile just before we found the garden... A grocer was delivering fresh produce to a storefront. A box of tomatoes and a box of mushrooms somehow overturned and began rolling down the street. Stan and I had the same reaction as all of those around us...We gasped, "Oh no!" and began chasing down the tomatoes and mushrooms. Dozens of hands returned the produce to their boxes over the shoulders of the very surprised and very grateful grocer. But y'know, that's just how we roll here. (Sorry!) Hehe.
at September 06, 2017

In all the time I lived and visited Edinburgh I never fond this. NEXT trip!!!