The Fan Brothers' THE ANTLERED SHIP

Dashka Slater (who I interviewed HERE) has written a new book illustrated by the same team that illustrated The Night Gardener. I'm thrilled to have The Fan Brothers, Eric and Terry, here today to talk about illustrating THE ANTLERED SHIP. 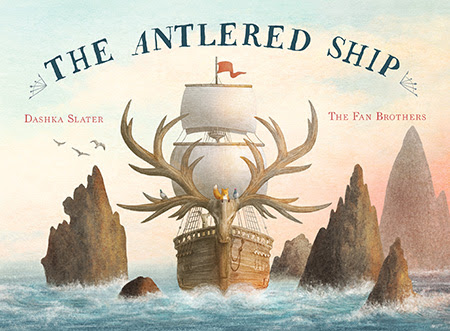 e: Can you walk us through your creative process behind The Antlered Ship?
The Fan Brothers: The first step to creating any picture book is to do concept sketches and eventually a rough dummy. The dummy is a guide for all the final art and allows the editor and art director—in this case Andrea Welch and Lauren Rille at Beach Lane Books—to offer feedback and guidance when the book is still in its formative stages. Usually there are a few versions of the dummy created to address their feedback and to refine the layouts and page turns to everyone's satisfaction.
There are always a variety of different approaches you can take with a story, so the purpose of doing sketches is also to refine what approach will best carry the narrative you're attempting to illustrate. For example, early on we weren't sure if the characters in The Antlered Ship should be anthropomorphized or whether they should be more naturalistic. We eventually opted for the latter, but here's an early sketch where the animals were fully anthropomorphized:

And here are some concept sketches of the ship itself: 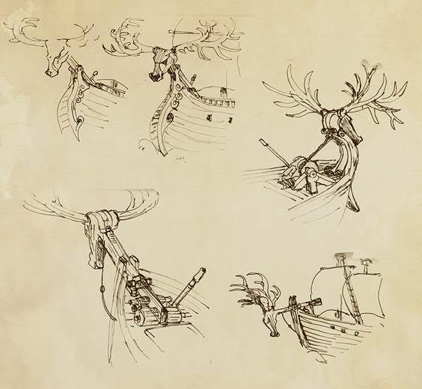 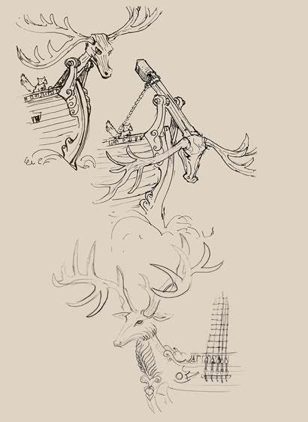 ​And finally, some examples of what the dummy looks like compared to final art: 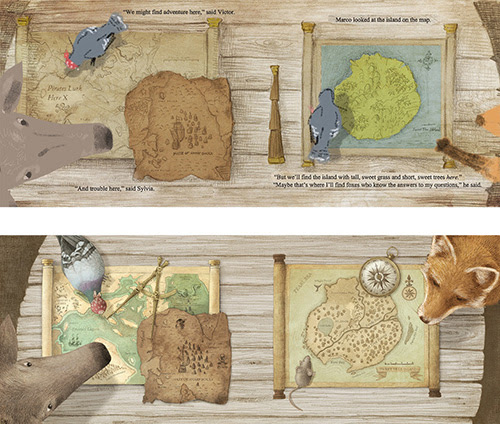 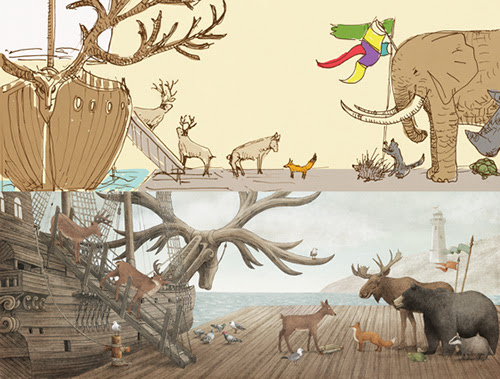 As you can see​, sometimes the dummy image stays pretty close to the final, and sometimes it veers significantly. We originally had exotic animals on the dock, but Andrea and Lauren suggested—I think sensibly—that having animals that were geographically relevant to the deer might make the world seem more grounded and internally consistent. That change happened while we were doing final art, and we had already started the process of rendering the other animals, which never made it into the book, although we did sneak the tortoise into a later scene (minus his little hat). 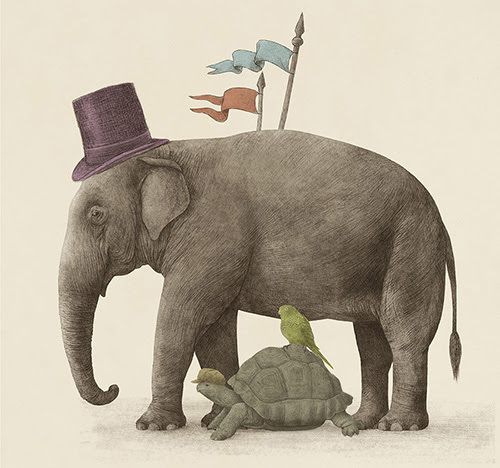 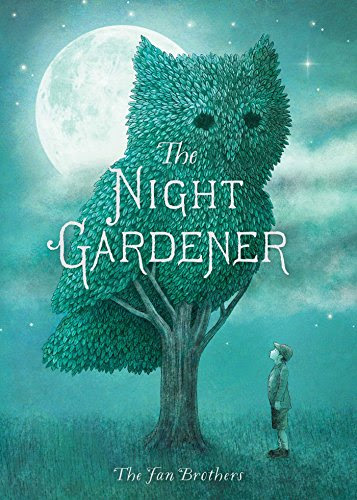 ​ e: How was this book different from your amazing debut, The Night Gardner?
The Fan Brothers: We've always enjoyed drawing animals, and while The Night Gardener had its share of animals in the form of topiaries, The Antlered Ship was the first story we've done with an entire animal cast of characters. It's also a very different setting than The Night Gardener, since it's a sea voyage, which takes the characters to a variety of different locales.

e: What do you think makes an illustration magical, what I call "Heart Art”—the sort that makes a reader want to come back to look again and again?
The Fan Brothers: "Heart Art" for us is art that engages the imagination in such a way that it opens a doorway back to our own childhoods. So we always try to create art that resonates with the part of us that still remembers that sense of wonder and mystery, and we hope that some of that feeling carries over to readers.

e: Is there a unique or funny story behind the creation of The Antlered Ship?
The Fan Brothers: I'm not sure if it qualifies as unique or funny, but The Antlered Ship was the first book we've done where we built a little reference model to help us with a couple of illustrations. We were faced with the challenge of keeping the antlers on the ship's masthead consistent, so we constructed a mock-up in Fimo modelling clay as a guide: 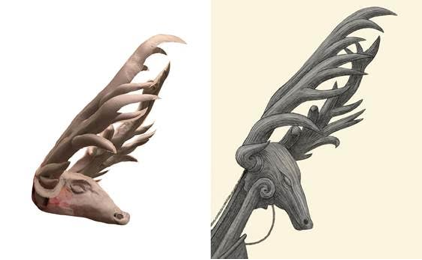 e: What was your path into publishing?
The Fan Brothers:   Both of us had a rather circuitous path into picture books. We attended OCAD University in Toronto to study art, but after graduating, life took us in a few different directions. For a while we had a literary agent in Hollywood and were attempting to sell a spec script that we had written with our younger brother Devin. In the meantime we were working in non-art-related jobs and doing art on the side. When our dreams of Hollywood fame and fortune failed to materialize, we both started submitting t-shirt designs to a new website called Threadless. We were fortunate enough to get some of our designs selected, and I think this reignited our passion for doing art. When Threadless partnered with another website called Society6, we started uploading our art there, which eventually caught the eye of our agent-extraordinaire Kirsten Hall, who had just started her new agency, Catbird. She asked us if we had any story ideas she could pitch, and we remembered a t-shirt design we had done many years ago called The Night Gardener. Even though it was a standalone design, we always felt there was a story waiting to be told that we could build from the image: 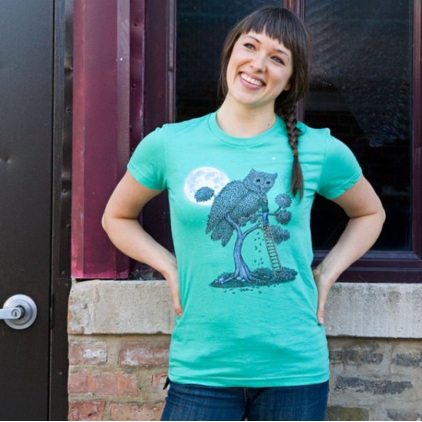 ​ e: What is your favorite or most challenging part of being a creator?
The Fan Brothers: Our favorite part of being creators—specifically of picture books—is the possibility that our work will impact a reader in the same way that we were impacted by art when we were kids. There's nothing more gratifying than hearing from a reader who loved your work or was inspired by it—whether it's a kid or an adult. The most challenging part is to keep dipping into the creative well and hoping you still find something inspiring there. It's the same challenge that every artist inevitably faces—the blank sheet of paper.

e: Is there something in particular about this story you hope readers will take away with them, perhaps something that isn’t immediately obvious?
The Fan Brothers: When we originally read The Antlered Ship, which was written by Dashka Slater, I think what struck us—beyond the core message that finding what you're looking for is sometimes right under your nose—was the open-ended quality of the story. It ends where it begins: with questions. I think there's an apt metaphor for life there. We never get all the answers we're looking for, but asking questions carries us to places that give our lives meaning and purpose. It's a particularly resonant theme for children, because children are the ultimate question-askers, and in that way Marco is touchingly childlike (but never childish).

e: Thank you, Eric and Terry! We look forward to seeing more of your wonderful work, including Ocean Meets Sky! 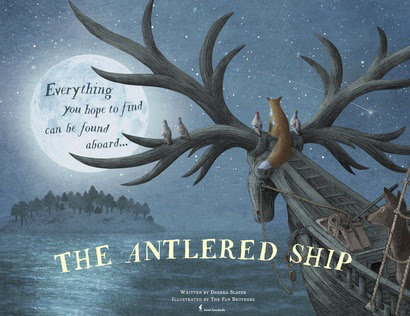 I love their work so much--would love to work with them!!!

Beautiful art! Thanks for sharing.

Wonderful interview. I recently purchased a Fan Brothers tote bag design from Society6 (I LOVE it and am thinking of buying another), but didn't realize The Night Gardener was inspired from a T-shirt design. That's fascinating!