I met Amy Butler Greenfield at the Kindling Words conference at Dalhousie Castle in Scotland. I'm thrilled to have her here today to talk about her newest book, RA THE MIGHTY! 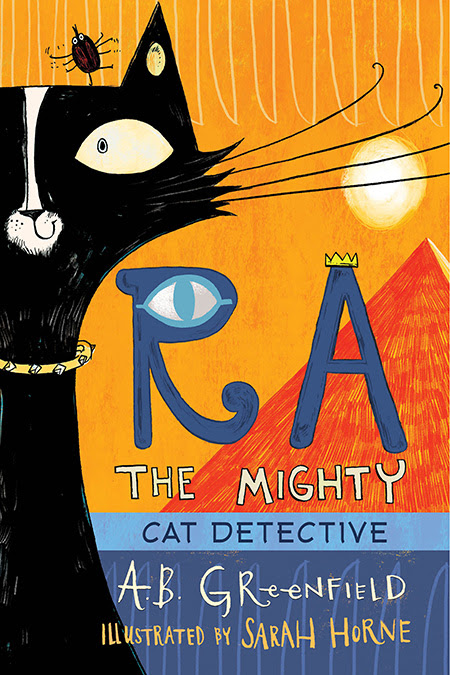 My next book, RA THE MIGHTY, is a comic mystery set in Ancient Egypt. It stars an unlikely detective duo: Pharaoh’s pampered cat and his scarab beetle sidekick.
A scarab beetle sidekick? The very idea makes most people laugh. It makes me laugh, too. But even as I’m laughing, I know I owe that beetle a big thank-you. Without him, there wouldn’t have been a book at all.
Funnily enough, when the idea for RA THE MIGHTY first came to me, there were no insects in it whatsoever. What I had in mind was an Ancient Egyptian mystery solved by cats.
I love cats, and one of my favorite sculptures of all time is this beauty in the British Museum:

Meet the Gayer-Anderson Cat, a bronze, hollow-cast sculpture from Ancient Egypt. I stop by to see it whenever I can.
With this, you would think I had all the inspiration I needed. But for some reason, it wasn’t enough. Some essential spark was missing, and I didn’t know what it could be. So I filed the idea away.
Months later, I turned on the radio while cooking and found myself in the middle of a program about beetles. (Yes, really—a radio documentary about beetles. The BBC is a wonderful thing.) As I stirred and listened, a new idea came to me… what if my cat detective had a scarab beetle partner?
I pictured a beetle riding between my cat’s ears, and I knew right then that I was going to write that book.
I had a ball writing about Ra, Pharaoh’s spoiled cat, and Khepri, the earnest scarab beetle. I’ve never laughed so much while working on anything. Their story is very much a mystery, but as I wrote, it became something bigger as well: a tale about friendship.
Months later, I made another visit to the cat in the British Museum, and I realized why my subconscious was just waiting for that beetle to show up. Take a closer look at the cat’s head: 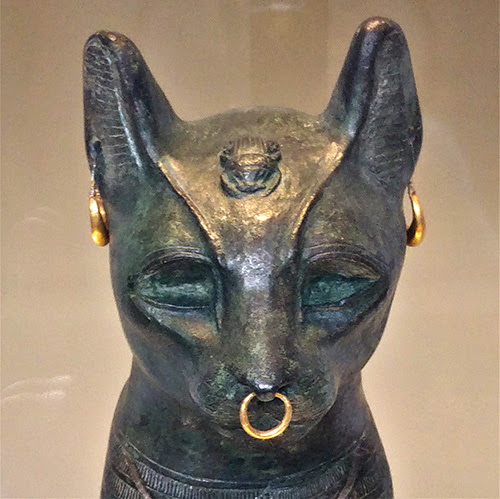 There he is, right between the ears. My beetle!
When the marvelous Sarah Horne signed on to illustrate the book, Ra and Khepri gained a whole new dimension. Like me, Sarah headed off to the British Museum for inspiration. I can’t tell you how happy I was when I saw her cover design (above).
She captured Ra and Khepri perfectly, and her internal illustrations are even funnier. Every time I look at them, I smile.
As I write my next book about Ra and Khepri, here’s what I’ve got on my desk to inspire me—a cat and a scarab, gifts from friends who live in Cairo. 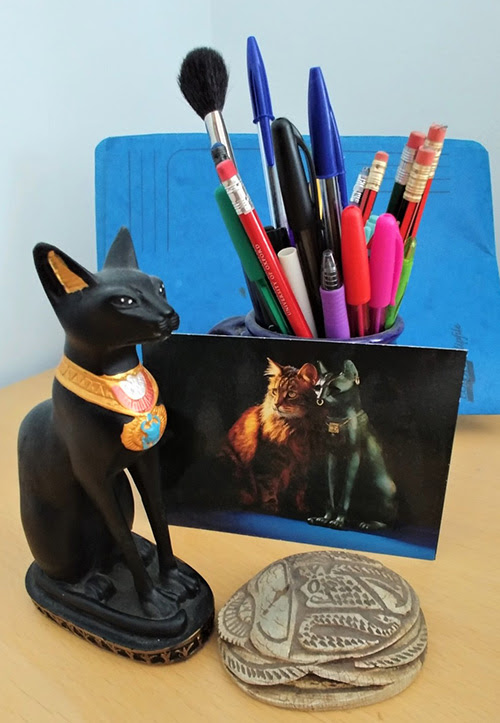 I’ve put them next to a favorite postcard from the British Museum. They’re my good-luck charms, spurring me on as I write Ra and Khepri’s next adventure. Tomb-robbers, here we come!
at September 20, 2018