I love featuring my fellow faculty at Hollins University. Today, John Steven Gurney stops by to talk about his newest graphic novels. He's so clever and funny, I know you'll enjoy learning about them! So, take it away, John! 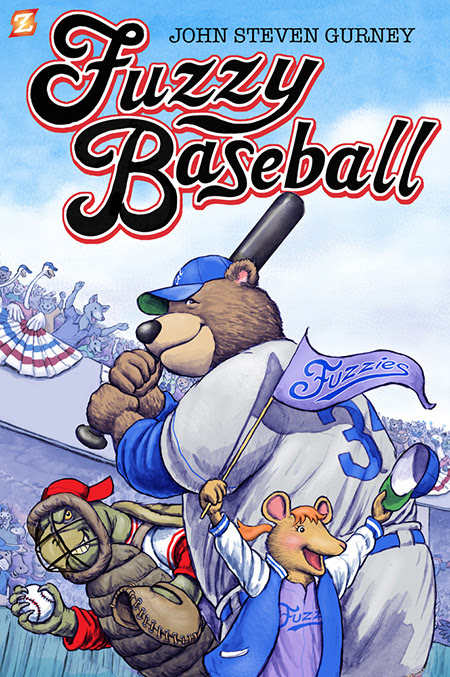 e: Is there a unique or funny story behind the creation of this story?
John: There were a few inspirations for Fuzzy Baseball. When I wrote the first drafts of the story my son was just learning to play baseball, and it was hard finding picture books about the sport that were funny, but also true to the rules of the game. A lot of great silly baseball books, and many nostalgic books about great players from history, but I couldn’t find any that had a sense of humor, and where the elements of the game advanced the plot. Another inspiration was memories of growing up a Philadelphia Phillies fan in the 1970’s, and watching them always lose to the Cincinnati Reds, but also experiencing them win the 1980 World Series. I had similar experiences rooting for two hometown teams later in life; the Mets in 1986 and the Red Sox in 2004. 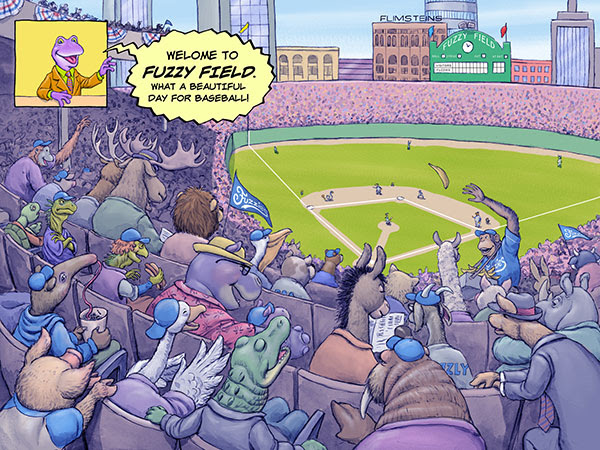 I was sketching some animals playing baseball, and the concept for the story started there. I first wrote Fuzzy Baseball as a picture book, and I shared it with my writers’ group, lead by authors Jesse Haas and Michael Daley. Over the course of 10 years I kept submitting it to publishers, revising it after rejections, shelving it, and reimagining it, and resubmitting it. It evolved from a picture book to a chapter book to a graphic novel. It definitely got the most encouraging rejection letters (no contradiction there) as a graphic novel. As it kept developing, I really felt it needed to be a graphic novel/picture book hybrid. Finally, I found a company that specialized in exactly that genre, Papercutz, and they wanted to publish it as soon as they saw the dummy. 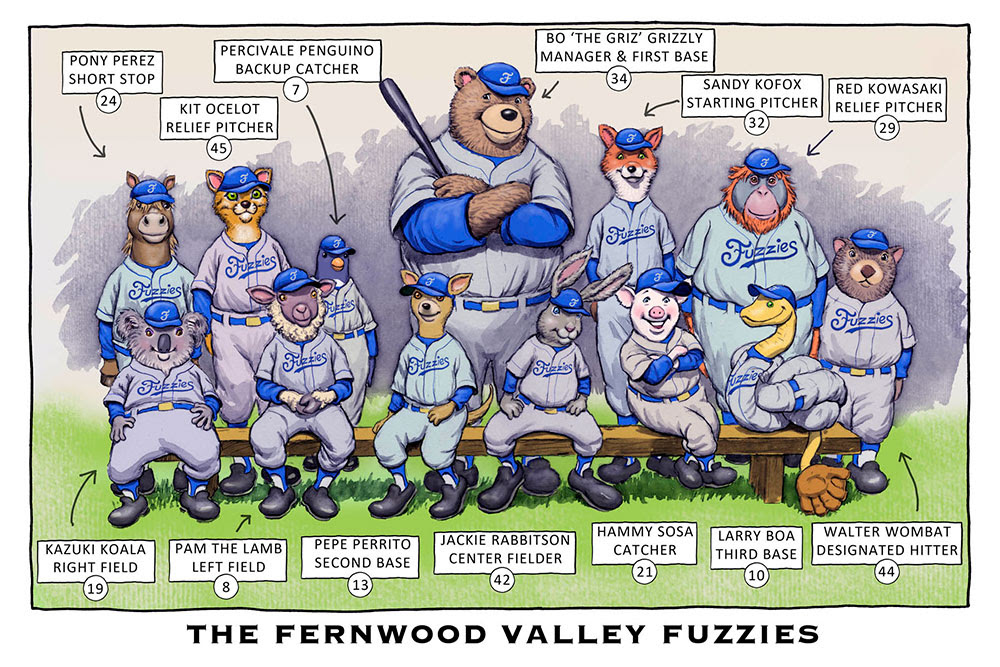 (Click the image above to see it larger in a new window.)
e: What is your creative process/medium, can you walk us through it?
John: My process was to draw each of the illustrations in pencil, then paint monochromatically with grey watercolor. I scanned all the illustrations and finished them in photoshop. I added the word balloons and type, and arranged the panels on the spreads. Then I added the color in layers, with one layer for the unifying “shadow” colors, and another layer for the “local” colors. I would add texture and further shading in the local color layer. Finally, I would create another layer to paste on the team logos and uniform numbers.

(Click the image above to see it larger in a new window.)
e: Is there something in particular about this story you hope readers will take away with them, perhaps something that isn’t immediately obvious?
John: I’m hoping that the younger readers have fun, and learn a little bit about the game, and the older readers enjoy the jokes and references. 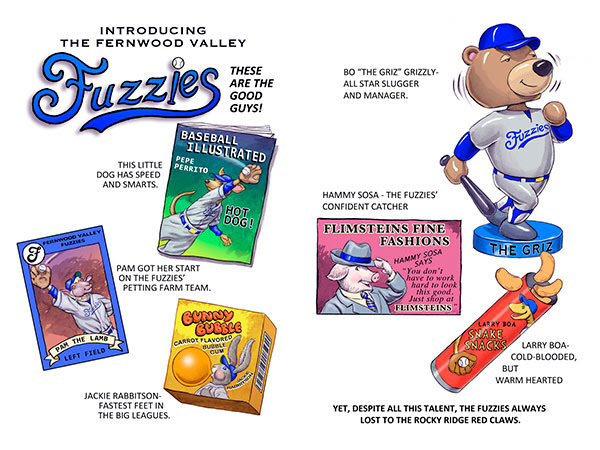 (Click the image above to see it larger in a new window.)
e: How do you advertise yourself?
John: As of late I do not advertise for illustration work, but I do advertise for school visits and caricature gigs. It seems to me that posting regularly on Instagram and Tumblr is as effective as any current illustration advertising vehicle. 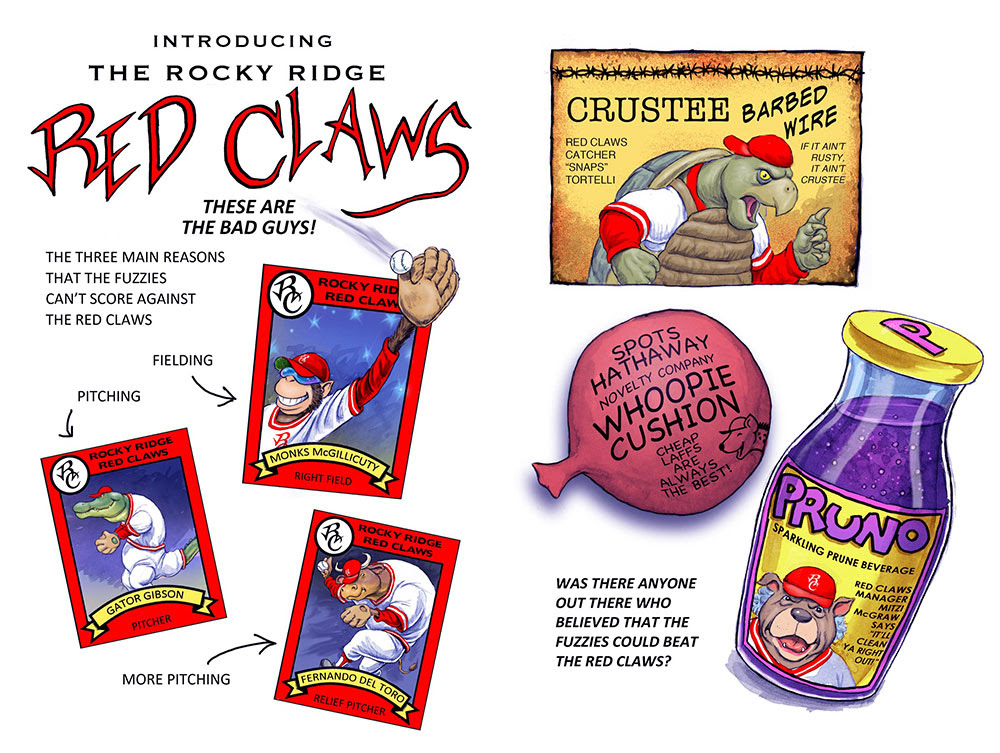 (Click the image above to see it larger in a new window.)

e: What do you think makes an illustration magical, what I call "Heart Art” - the sort that makes a reader want to come back to look again and again?
John: My idea of what makes an illustration magical is, as you put it, to have heart. When I graduated from Pratt Institute my portfolio had a lot of cynical humor pieces. I wanted to be a social satirist. I have found its easy to poke fun at something, but harder to make someone care about something. Humor is still the major connective tissue in my work, but the challenge is to create a scene with characters that can earn the viewers affection, as well as make them chuckle. I also like to work with contradiction; to go against expectations a little bit. In Fuzzy Baseball there’s a snake on the Fernwood Valley Fuzzies who happens to be a nice guy (cold-blooded but warm-hearted). On the villainous opposing team, the Rocky Ridge Red Claws, the players all look like feral and nasty beasts, but there is a sweet, dewy eyed giraffe on the team who is holding up a “trade me!” sign in the team photo. 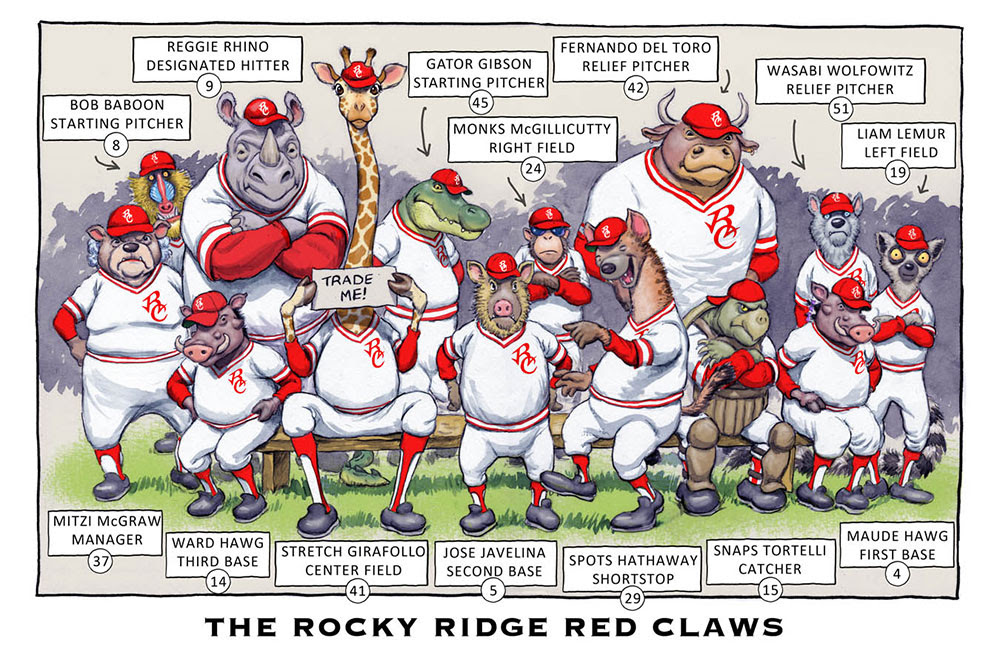 (Click the image above to see it larger in a new window.)
e: What is your favorite or most challenging part of being a creator?
John: I love being a creator, to illustrate my own stories. The biggest challenge is the un-evenness of work. It either all comes in a once, and your scrambling to meet the deadlines, or you have a month where nothing comes in and you struggle to pay the bills. It would be an ideal life if I could just space the work evenly throughout the year. 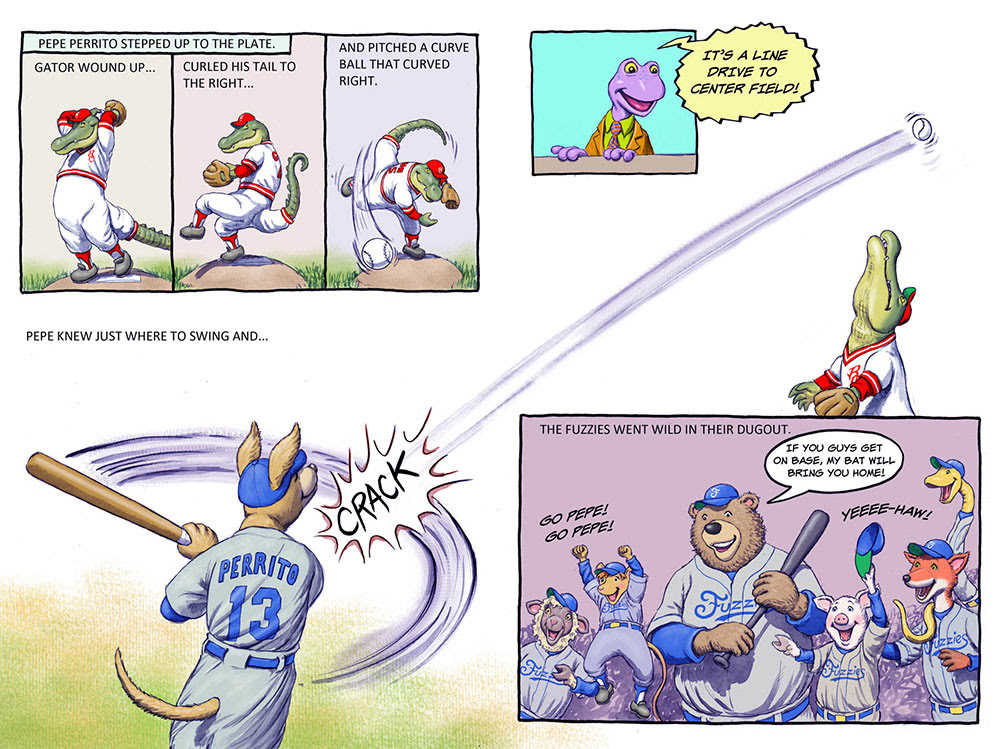 (Click the image above to see it larger in a new window.)
e: What are you working on next or what would be your dream project?
John: My latest book, “The Bossy Pirate”, is coming out this October. Its an early reader about a young boy and his friends pretending to be pirates, and the scenes alternate between them all playing in his bedroom, and sailing on an actual pirate ship. But, emotionally, the story is really about learning not to be too controlling, and to allow others to contribute ideas during play (or life). 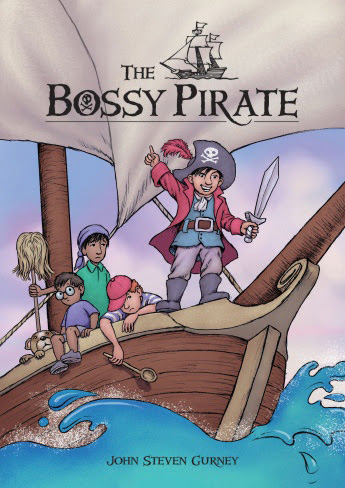 Right now I am working on the sequel to Fuzzy Baseball, “Ninja Baseball Blast”. The Fuzzies travel to Sashimi City to play the mysterious Ninjas. It’s a silly romp, and an affectionate parody of many familiar Manga cliches. 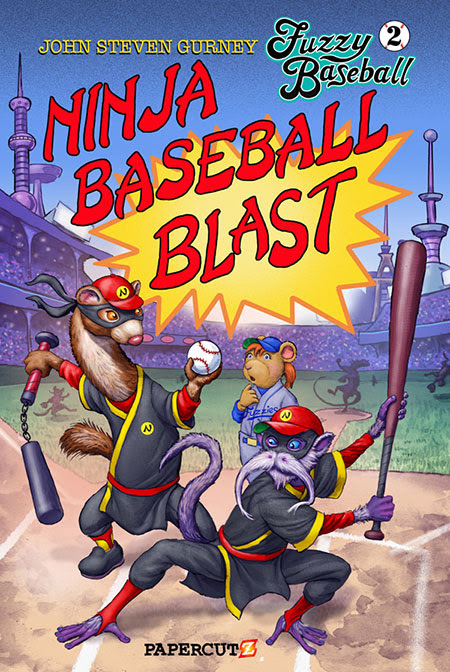