Good News for WU - Our Ranking has gone UP! 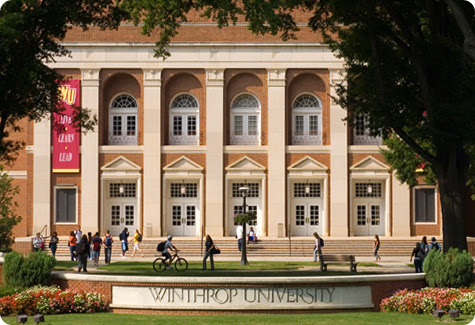 ROCK HILL, SOUTH CAROLINA — Winthrop University’s 6-year graduation rate, its commitment to undergraduate teaching, assistance to veterans and the social mobility of its graduates contributed to its climb from eighth to sixth place among public universities in the South, according to U.S. News & World Report's 2021 edition of "Best Colleges.”

This is the highest ranking ever for the Rock Hill institution. Winthrop also moved from 17th to 13th place among regional universities in the South, according to the rankings released on Sept. 14.

Winthrop Interim President George W. Hynd was proud to see the jump in overall rankings and for the school to continue to be recognized in different categories. “These rankings demonstrate that the Winthrop approach is working,” Hynd said. “The increase in the percentage of students who graduated within six years is evidence of the student success efforts occurring in areas across campus. With small classes, our faculty members know their students and can help them reach their potential.”

Hynd said the rankings are a source of pride for the university and are a testament to faculty and staff efforts to provide the exemplary educational experience for which Winthrop is known.

Winthrop stood out among the newsmagazine’s Best Regional Universities in the South in the following categories:

-Rose from 8th to 7th place among best colleges for veterans;

-Placed 12th for most innovative schools;

-Held on to 11th place for best undergraduate teaching as judged by peers; and

-Ranked 23nd for social mobility, a fairly new category that measures how well schools graduated students who received federal Pell Grants (those typically coming from households whose family incomes are less than $50,000 annually).

U.S. News & World Report has published its “Best Colleges” rankings since 1983. The rankings can be used as a starting point for families searching for the best educational experience for their student, and the guidebook enables them to compare institutions on such areas as freshman retention, graduation rates and the student-faculty ratios.

Among other third-party endorsements, the Princeton Review in August named Winthrop among the “Best in the Southeast.” The university was one of 142 schools that the company recommends in its online feature "2021 Best Colleges: Region by Region.” In addition, Winthrop was recently recognized by Washington Monthly as one of 157 institutions to make its “honor roll” for registering students to vote.