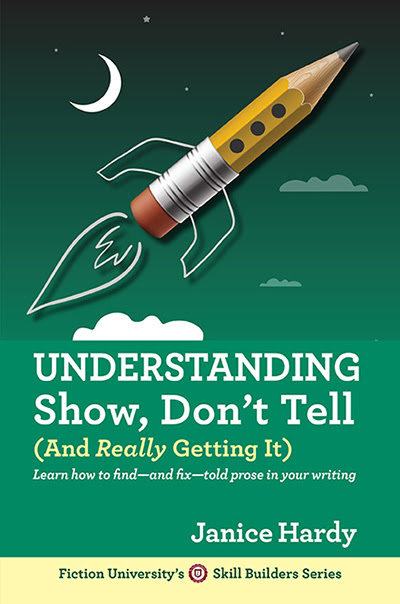 The Problem With Telling, Not Showing Telling
By Janice Hardy, @Janice_Hardy

Writing styles evolve and change, and reader taste changes with them. One of the more obvious ways is how we handle show, don't tell. A hundred years ago, books were filled with told prose and heavy passages of description. Books written as recently as a few decades ago can feel dated and stale to today’s readers. The more visual we’ve become as a society, the more shown we expect our books to be.
This is why it’s so important to understand what telling is, what it sounds like, and how it affects your writing, so you can best judge how to handle it. The thriller writer who uses omniscient point of view with multiple characters has different needs than the first-person point of view young adult writer. The same sentence can feel told in one passage and shown in another.
Because of this, there are two sides to the show, don’t tell problem:
• Problems writers face
• Problems readers face

Problems Readers Face
Readers might say, “Tell me a story,” but a great story is more than relaying facts and details in a logical order. Readers want an immersive experience with enough descriptive details to bring a story to life in their heads.
Telling robs them of that chance. It explains all the reasons why things are as they are, it telegraphs what’s going to happen, and it leaves little to the imagination. It’s the difference between seeing a movie, and having someone tell you all about the movie, describing it scene by scene.
Half the fun of reading is anticipating what’s going to happen next and how the story will unfold. Readers love to wonder about the characters and try to figure out the plot twists and story secrets ahead of time. If it’s too easy, or all the answers are told to them, there’s really no point in reading.
What a reader considers good writing also varies. Readers of literary fiction might want as many adjectives and word pictures as they can get, enjoying the wordplay and use of language. Readers of thrillers might prefer a little explanation (telling) to keep the pace moving quickly, while romance readers want the focus on the emotions and how everyone feels more than dramatizing the action.

Problems Writers Face
The number-one problem writers face is finding and identifying told prose in their work. It’s hard to be objective, and reading your own words as you “tell” your story feels perfectly normal. Writing, “John was angry about getting fired” is exactly what’s going on in the story. John is angry about getting fired and you’re writing all about his anger and what he does about it. You imagine all the emotions, thoughts, and actions that support John’s anger, but often, those details never make it onto the page.
Let’s take this sentence and expand it into a typical paragraph that might start a chapter or scene:

John was angry about getting fired. He yelled at his wife, his kids, even the neighbors. None of his friends wanted to talk to him, and it had gotten so bad they pretended not to see him when they ran into him at the grocery store. Naturally, this pissed him off even more, and it was the poor dog that suffered his wrath.

John slammed the door behind him. Who did that stuffed shirt think he was anyway? Fire him? That cesspool of an office would wither and die without him.
“You’re home early,” Maria said, coming in from the kitchen.
“Am I interrupting your bon-bon eating or something?”
Her smile faded. “What’s wrong?”
“I don’t get any damn respect, that’s what’s wrong.” 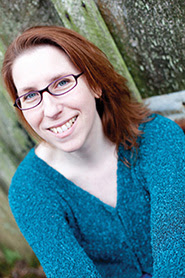 When you compare the two pieces now, how do you feel about them? Odds are the first feels much more told and summarized, while this feels shown and in the moment. It’s obvious John is angry and lashing out, it’s clear why, and you’re probably much more curious about what will happen next than you were in the first paragraph—maybe even dreading what John might do.
This is why it’s hard to spot told prose. Often, told prose stands out when compared to how the rest of the novel is written. A tiny bit of detached, explanatory prose here and there blends in and bothers no one, but use a lot of it, and the entire novel feels flat.
The second major problem writers face is that both readers and others writers have different opinions on:

The person who prefers distant third-person narrators will have a higher acceptance for told prose than the first-person fan. The point of view styles are handled differently, and readers react differently as well. It’s very subjective.
Don’t let this discourage you, however. Understanding this annoying fact is what will allow you to really understand what show, don’t tell means. You won’t be following inflexible rules, but looking at your work and determining where it feels weak and how it could be made stronger.
Do you struggle with show, don't tell?
Check out my new book, Understanding Show, Don't Tell (And Really Getting it), and learn what show, don't tell means, how to spot told prose in your writing, and why common advice on how to fix it doesn't always work.

Janice Hardy is the award-winning author of The Healing Wars trilogy and the Foundations of Fiction series, including Planning Your Novel: Ideas and Structure, a self-guided workshop for planning or revising a novel, the companion Planning Your Novel Workbook, and Revising Your Novel: First Draft to Finished Draft. She's also the founder of the writing site, Fiction University. For more advice and helpful writing tips, visit her at www.fiction-university.com or @Janice_Hardy. 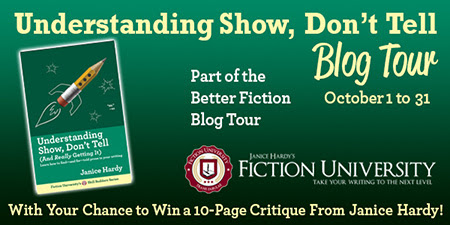 Thanks for having me, e!

It is so often communicated as a hard and fast rule! Thank you for explaining it so clearly as context dependent. I can think of two middle grade ni els where telling is used but the effect is quite different. In 'The Hobbit' I always feel that the narrator has sat me down to tell a story. the told prose feels like a conversation between reader and narrator. The other novel (the first in a large series) is just killed by the telling. Even allowing for more telling in MG fiction it just fell flat. The telling sucked all the immediacy and urgency from what was meNt to be a fast paced high action plot.

PS I can't see the Raffle entry form, is it missing or is it just hiding from me? Thanks again.

Vahlaeity, most welcome. That "hard and fast rile" aspect also drove me crazy as a new writer (still does, actually). It's so subjective. And I agree, I've had many an interesting book let me down by telling too much :) So sad when that happens.

Thanks for the tips. Especially enjoyed the READERS perspective. I'm getting a little misty about the tour ending. Hoping another book in the Skill Builder series will be coming soon!

JC, thanks! Writers and readers don't always see things the same. And writers are much picker :) Me, too. It's hard to believe it's all over now.

There will be more Skill Builders in 2017 for sure, probably summertime. I have to finish up Polishing Your Novel first (the companion book to the revision novel), which should come out early in the year.