This isn't going to be a typical post from me - I rarely discuss political issues on my blog. But I hope you'll stick with me, dear readers, on this post. Polls suggest you might, because:

So I'm going to take a chance with you today and ask: why are existing bills (Red Flag Laws and Universal Background Checks) not moving faster through our legislative branch? As a children's book writer/illustrator and educator, it's infuriating to me to watch our children being traumatized when steps can be taken to reduce gun violence now.
Living in Scotland turned me into a political creature. When we first moved there, whenever people heard our 'American' accents, they asked us about guns. (Yeah, it got old.) But Stan and I had strong opinions to share on the topic. Living in Atlanta, we heard gunfire so often, we only called the police when we knew it was close - one or two streets over. We even had a bullet lodged in the side of our house just below our bedroom window. Part of the reason we moved was to get away from guns.
But lots of things changed in America after we moved to Scotland, upsetting things. I attended my first political march in Edinburgh. (My protest sign went viral through the BBC and the Edinburgh Evening News.) And I attended a second march. I began to really pay attention to what was going on in America. I learned to defend my opinions well. I created artwork to support my beliefs - you see it in my newsletter each week.
But it felt strange to be away when our home seemed to need us so badly, like I was supposed to be fighting with my feet on the ground - American soil. I suppose it was similar to after 9/11, when so many people moved to New York City to show solidarity and rebuild the city and its damaged soul. The call was strong. Part (one part) of the reason I felt the need to return to the US was to add my voice or simply to be one more body added to a crowd to show support.
So, when I learned about the Moms Demand Action rally taking place in Fountain Park this past Saturday in Rock Hill, in conjunction with gun legislation marches all over the country, I had to go. I made another sign and Stan took his camera—these are his images. 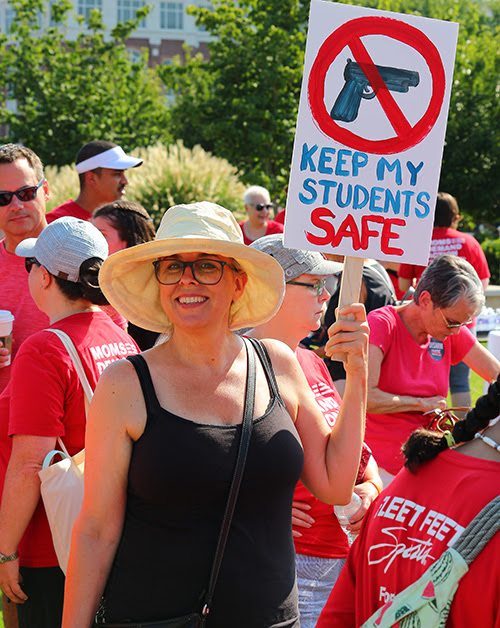 We were pleased to see the size of the crowd. And while I didn't know to wear red, I did get an 'educator' button that I was very proud to wear, a 'Disarm Hate' sticker, and Stan got a 'Disarm Hate' poster that now proudly sits in our window facing Main Street. 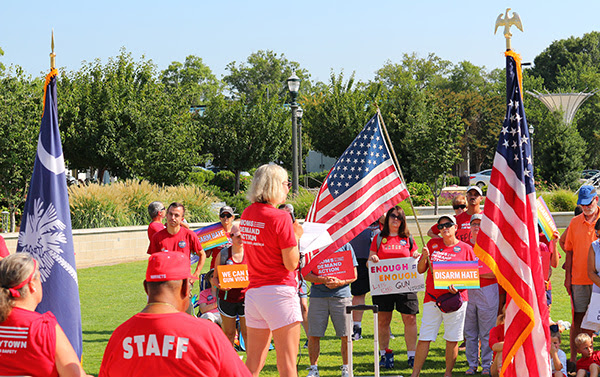 It was hot as blazes standing in the direct sun, but we weren't there to be comfortable.
For instance, we weren't comfortable when 10-year-old Chanze talked about having to do gun raid exercises at his school every month—when he shared that his school often plays the sound of gunfire over the intercom system to train the students on what to do if a shooter enters their building. 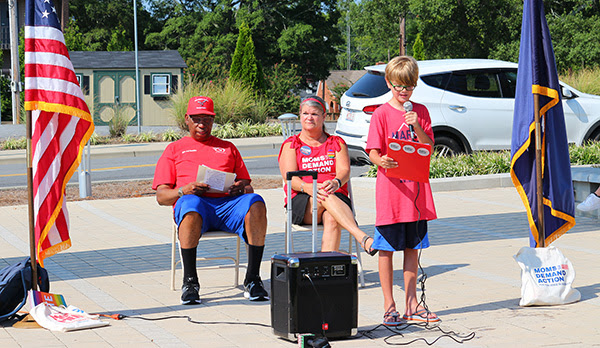 We weren't comfortable when 17-year-old high school student Jules talked about losing a friend in the Parkland shooting and demanded action from our local legislators. She made it clear how painfully aware she is of where they are failing her generation. 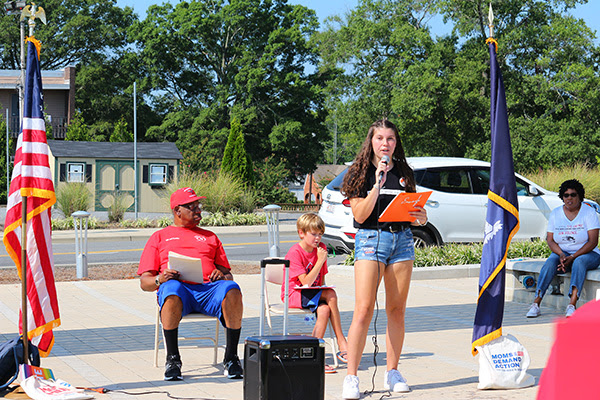 We weren't comfortable when teacher Lori Carter talked about losing one student to gun violence, and two others to jail from gun violence; how she has been trained to staunch a bullet wound with a tampon or create a tourniquet with a USB cable.
And we most certainly weren't comfortable when Betty, a local mother told us about losing both of her sons to gun violence, and how the gun that took her youngest son's life is still out there changing hands, still doing harm - something the Red Flag Law could prevent. 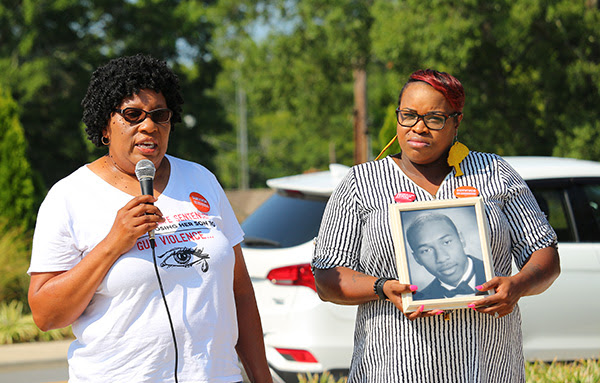 We learned how to text Senator Lindsey Graham to demand action. 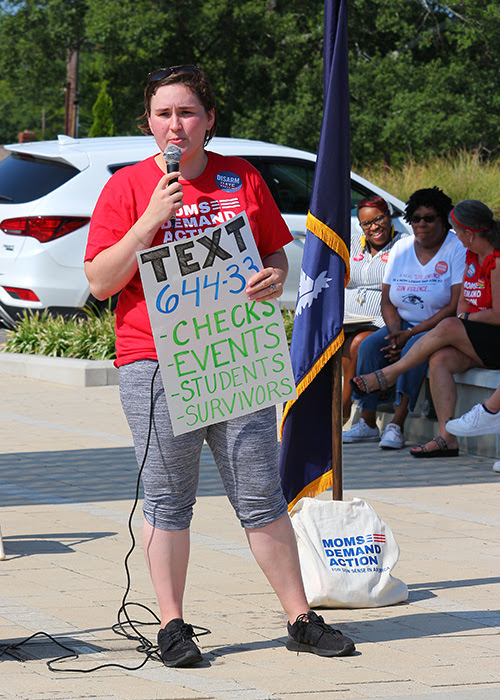 Then we marched to his office. Turns out Lindsey Graham keeps a satellite office right here in Rock Hill. I'm not happy about that, but it certainly gave us a destination point for the march. 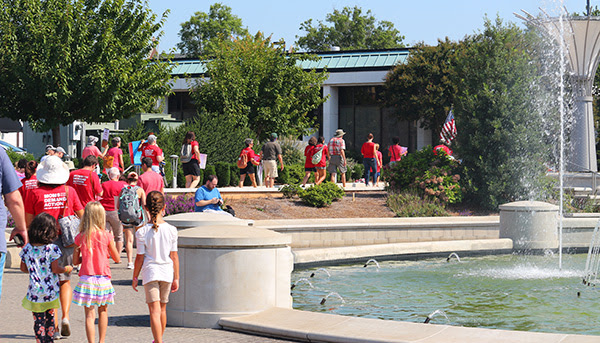 The office was closed, of course - it was Saturday. But many of those in attendance stop by his office regularly. There's a little clock on the door that says 'We will be back at 9:00am, 11:00am, 2:00pm, etc.' It moves. Somebody is moving it. But nobody ever seems to be available, despite the fact that legislators are supposed to be home right now to connect with their constituents. If Lindsey had been there, he would have seen us, children and adults, shouting for change, shouting for reform, and shouting for a stop to the terror. 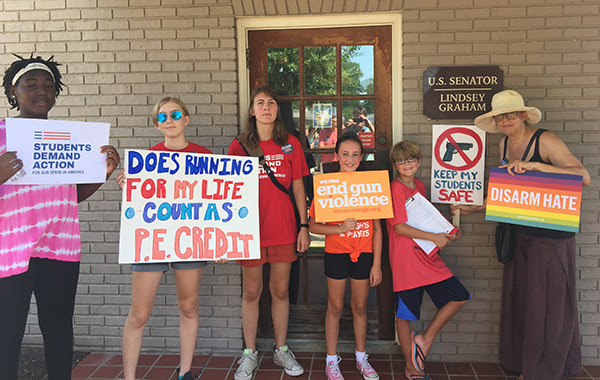 If you're still reading, I'm probably preaching to the choir, but I hope that if you were on the fence, you'll perhaps join the battle for common-sense gun legislation, and maybe even attend a rally to add your voice. Here's the upcoming legislative schedule at BuzzFeed - maybe make a phone call or a hundred. Because our founding fathers never could have imagined that their second amendment would turn into THIS ("What the data says about gun deaths in the U.S."). I like to think they would have written it differently if they could have seen the perverse result of their legislation.
Thoughts and prayers aren't enough - they were never enough - not after the first shooting and not after each and every mass shooting since then. Our legislators must do something now.
Meanwhile, this is what I can do... create a blog post, create artwork, be present at a march, and vote of course. I hope you will too. Because, if our current legislators won't do something about the terror our country now lives in because of gun violence, it's time to vote them out of office. Contact your lawmakers by texting CHECKS to 644-33.
Thank you for reading.
at August 21, 2019