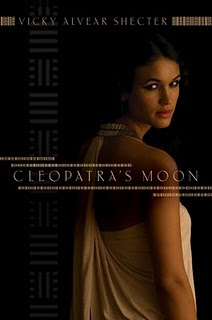 I am thrilled to introduce you to a fabulous new book today (and an amazingly talented author). My bud, Vicky Alvear Shecter is the author (and photo collector) of CLEOPATRA RULES! (Boyds Mills Press)
In the same vein as her first book, ALEXANDER THE GREAT ROCKS THE WORLD, the voice is honest, modern and a bit... snarky. Fabulously fun and accessible for a generation who demand history be presented in a manner they can enjoy.
And why not!? Cleopatra was one heck of a woman. History has painted her with some rather ugly stereotypes, but CLEOPATRA RULES sets the record straight.
Even better, Vicky is a docent at the Emory Carlos Museum (home to Ramses for a little while), so she really knows her stuff. (Walking through that museum with her is a complete blast.) She also has a fabulous blog which gives you even more fun information at History With a Twist.
So, without further adieu - I asked her some questions...

Q. I adored CLEOPATRA RULES! You wrote with such a fun voice, kids will be sucked in (I was) and without meaning to, they'll learn about this powerful woman. Where does this voice come from?

A. A couple of reviews have mentioned the voice sounding more like a “gossipy blog” than a history book, which made me happy because that’s exactly what I was going for. I think the voice comes from a deep desire to show kids, especially young teens, that history can be just as awesome, funny, and entertaining as the stuff they read in People or watch on TV.
With so many distractions pulling kids away from reading and history, I was determined to engage them in a way that they instantly “got.” There’s plenty of time in late high school and college to adopt the more staid voice/approach to history. And, because my research was thorough, kids don’t even realize their getting “schooled” on a lot of classical history.
Finally, I have to say that I’ve always been inspired by my big brother, Michael Alvear, who is a brilliantly funny writer. But he could care less about history. He became my barometer. If I could keep him interested in the story, then certainly (I hoped) I could keep a kid interested.

Q. You also wrote ALEXANDER THE GREAT ROCKS THE WORLD in a similar way. Why did these two stories need to be told, in your opinion. And is there another book screaming to be next? 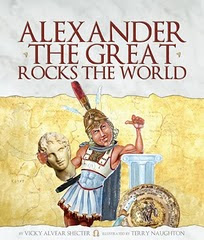 A. In the end, I think, we write about what fascinates us. I loved ancient history as a kid and dreamt of becoming an archaeologist. But I lost that dream, somehow, as I grew up. I remember once, when I first started playing with the idea of writing a kid’s book about Alexander the Great, someone (not a writer or artist!), said, “Why on earth would you want to do that?” Talk about being doused with cold water! But it was a great question because ultimately I answered it like this: Because I’m fascinated and awed by the subject matter.

Q. I know you are a docent at the Carlos Museum - one of the best small museums representing Greek and Egyptian history in the US. Why the fascination with Cleopatra?

A. Originally, I wrote a book about several ancient “killer queens” and even sold the book that way. But then the publisher closed its doors and I had to start over and resell the book. Larry Rosler at Boyds Mills, eventually picked it up and he wanted to focus solely on Cleopatra. I remember what he said too, which was something along the lines of, “I’m sorry but once you read Cleopatra’s story, nothing else matches it for drama and entertainment. Let’s just focus on her.”
How could I disagree? 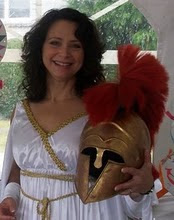 Q. You're also in the middle of edits on CLEOPATRA'S MOON - an historical novel about Cleopatra's daughter coming out from Scholastic in 2011. Can you tell us more about it, and has it been difficult to switch between the different approaches to writing mid-grade and young adult?

A. In the process of researching Cleopatra, I discovered many things about her that surprised me, many of which never made it into the glamorized retellings of her story. The one that shocked me the most was that she was the mother of four children. Four! Who knew?
She had one son, with Julius Caesar and three children—two boys and one girl—with Mark Antony. And she was fiercely protective of them too. Yet only her daughter survived childhood. This was a child who ended up being reared in the home of the man responsible for the deaths of her parents and the destruction of her world. And yet she lived on to have a full, powerful life of her own. I just HAD to tell her story. And thank goodness for friends like you who encouraged me to do so!

I cannot wait for the public to read both of these amazing books because I am truly awed by Vicky's writing and storytelling. I'm lucky she's my friend! Thank you Vicky!

GIVEAWAY!!!! Go visit Vicky's blog and leave a comment to be entered in a drawing to win your very own copy of CLEOPATRA RULES! (Contest ends September 30th.)
at September 20, 2010

I love to read different kinds of books. Your first book was one I enjoyed. I'm sure the second one, with all the little known facts, will be fascinating.
Congratulations on getting it out.

Thanks for posting this, e! I love this industry and how supportive fellow authors are!

Great Q and A Elizabeth! Each one I read reveals something new and different about the process of writing, and the wonderful Vicky!

Great interview--can't wait to read it the book!