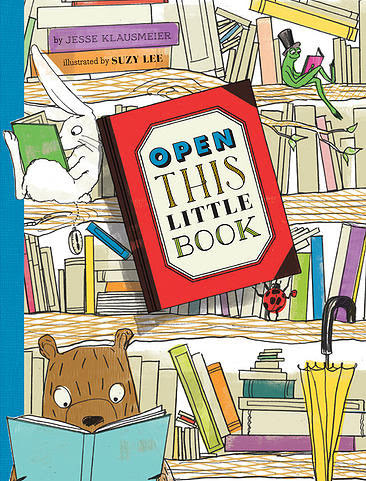 I’ve just had the great pleasure of experiencing OPEN THIS LITTLE BOOK, the new book written by Jesse Klausmeier and illustrated by Suzy Lee. I also feel the need to give a shout-out to the designer - Sara Gillingham Studio, because a lot of design considerations went into this book. It’s an engineering feat of smaller and smaller books being opened one within the other all the way through. 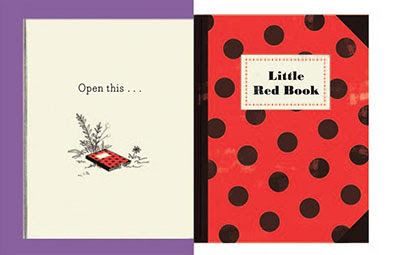 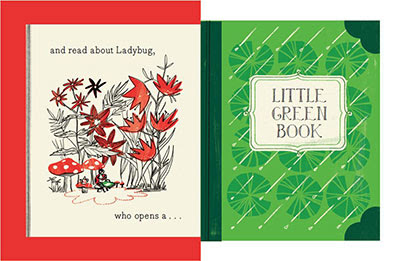 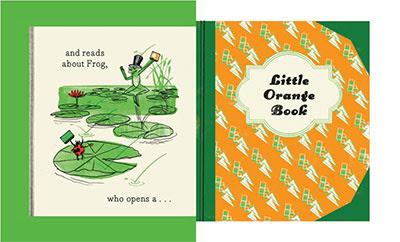 So how does an author create a book like this? Let’s find out!

Q. Jesse - Congratulations on such a brilliant book. I adore OPEN THIS LITTLE BOOK!
A. Thank you so much, Elizabeth! And yes, the designer, Sara Gillingham played a tremendous role in the design of our book. As a debut author, I cannot express how incredible it has been to be teamed up with such award-winning talent like Sara, Suzy Lee, our editor Victoria Rock and the team at Chronicle. (This is Jesse with a piece by Suzy.) 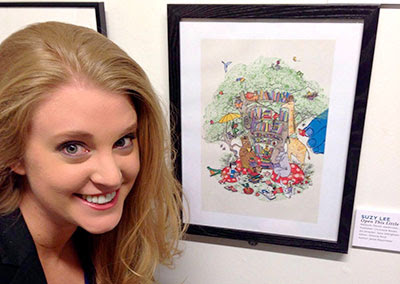 Q. So truly, how did you come up with the idea for this book and how did you present this manuscript to Chronicle?
A. I had the initial idea of a book-within-a-book-within-a-book when I was five years old. Like most kids, I wanted to postpone bedtime as long as I could, and I thought a book that never ended would accomplish that goal nicely. One day, I decided to write that book, and with some help from my Grandma Iyla, the first version of OPEN THIS LITTLE BOOK was created. 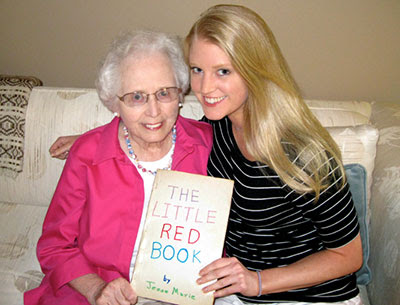 Fast-forward twenty-odd years. I had joined SCBWI and was actively involved in my Los Angeles chapter. I had written a handful of manuscripts, but was mostly reading and studying the craft. I found myself particularly drawn to conceptual picture books. As I read more and more of them, it struck me that I had yet to find one with the concept of a book-within-a-book, and the active nature of reading. So, I started searching for that book. When I was confident the idea hadn’t been done, I wrote the manuscript. But because of the unique format, I had no idea how to submit this type of proposal.
As luck would have it, the Los Angeles chapter of SCBWI had a writing retreat coming up, and Victoria Rock from Chronicle was on the faculty. I signed up right away because through all of my research, I had identified Chronicle as the ideal publisher for this manuscript. At the retreat I read my story aloud to Victoria in a small group and explained my vision for the book. We talked about it a bit, and at the end of the session Victoria asked if she could take my manuscript back to Chronicle. A few months later, she acquired it.

Q. Jesse, you were an assistant editor at Penguin Group’s Dial imprint. (A different house from where the book was published.) Did that give you an advantage when presenting such a tricky idea?
A. I actually sold the manuscript before I was hired at Dial. Honestly, I just really, really love books and I think my passion showed when I pitched my concept to Victoria. I had done my homework and could talk about what other books were out that celebrated reading, but also how my book was unique and filled a need in the market.

Q. Did you work closely with the illustrator and designer to get the concept working right?
A. It was a great team effort between Suzy, Victoria, Sara and me. We communicated throughout the entire project, which is quite unique. I saw illustrations and Suzy saw drafts of my manuscript; we were all committed to making this book the best it could be. We played around with design, format, and text until each piece felt right. As the book continued to develop it became like a game of, “What if/Yes, and…” to see how many layers we could weave into the book without making it feel heavy.
Ex. What if each of our characters brings an object with them into their book to show that we interpret stories through our own personal lens?
Yes! And, what if our characters switch their objects when they close their books to show that when we read a story, we gain a new perspective? 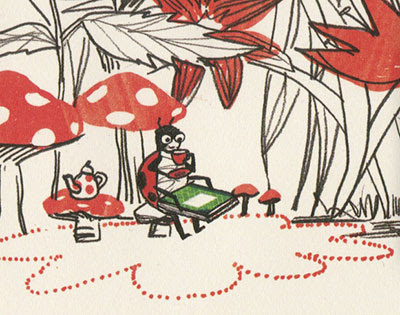 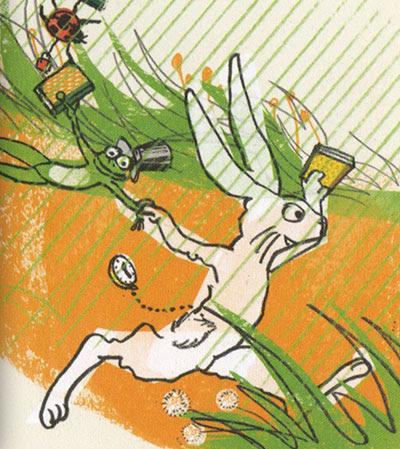 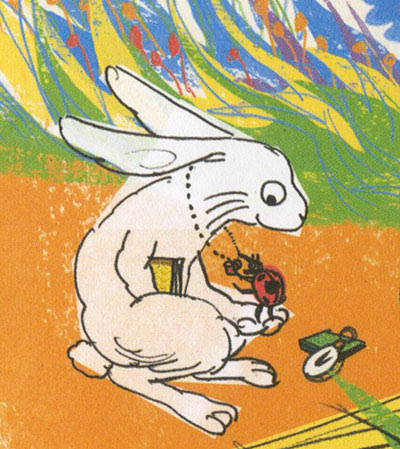 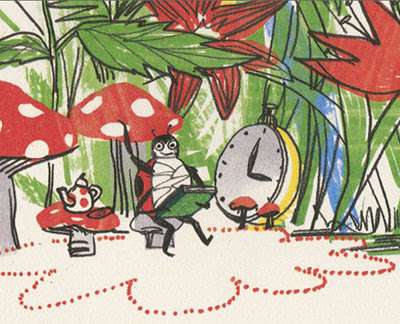 Q. I love the chain text and characters!
A. Thank you! I personally find stories with chain text/repetition so satisfying, so that means so much to me.

Q. What is the official term for a book like this that builds upon each previous page/character and then circles back around?
A. Hmmm… you know what? I’m not sure! I’m such a fan of chain text that I use it twice in the book: once with the overall story, and again within Giant’s teeny-tiny Little Rainbow Book.

Q. You obviously have a passion for books. What was your influence behind OPEN THIS LITTLE BOOK?
A. Two books in particular had a huge influence on OPEN THIS LITTLE BOOK:
THE MONSTER AT THE END OF THIS BOOK by Jon Stone and illustrated by Michael Smollin was the first book I experienced where the narrator spoke directly to the reader. In my story, the reader is the character that kicks off the book. The directive to open this little book instantly engages the reader and demonstrates that she or he plays an active role in the story. The reader is a character in the story, and their name is capitalized in the text at the end with, “You close this little red book...”
THE VERY HUNGRY CATERPILLAR by Eric Carle stands out for its innovative design. As a child, I found the collages and the die-cuts pages captivating. I had never seen anything like it, and it blew my mind. I want to blow little minds by playing with format and delivering something unexpected.

Q. OPEN THIS LITTLE BOOK received great reviews. How did that feel for your debut book?
A. I mean, it felt awesome, and also a little bit insane. To get starred reviews and be on best of the year lists is every author’s dream. Winning the Boston Globe-Horn Book Honor last year was amazing. I wish Suzy and Sara lived in the states so they could have been there. I hope I get to meet them in person one day.

Q. You’re no longer in New York, but I can’t imagine you’ve given up your passion. What is your book life like now? (I’m sure I’m not alone in saying I’ll be looking for whatever you come up with next!)
A. Oh, certainly not! I’m still as passionate about books as ever. Unfortunately, I’ve had some pretty serious health issues so most of my focus is dedicated to treatment, but I’ve been able to do 3-4 book events a year. I’m writing as much as I physically can, and luckily, there are always more fantastic books for me to read!

Wishing you improved health and much continued success!
A. Thank you, Elizabeth. I wish the very same for you!

Check out this sweet book trailer on YouTube, which gives you the full idea of how the book works: 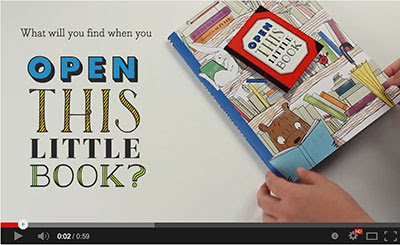 GIVEAWAY!
Chronicle Books has kindly agreed to give away one free copy of OPEN THIS LITTLE BOOK to one of my lucky followers. Must live in the US to win - enter below.

A Merry Christmas Day to you and thanks for the chance to win a copy of this book.

Oh, this sounds like a really cute book thanks for sharing

I've read OPEN THIS LITTLE BOOK and am so impressed by its cleverness. I love how you all worked as a team...so cool! Thanks Elizabeth and Jesse for an interesting interview.

This would make a great gift for a little three year old I know!

this looks adorable thanks

I just enjoyed this book at the library--terrific, especially considering it's your debut! And hope your health improves quickly.

Happy New Year to you. Keep on writing kids books.

What a wonderful idea for a book. Now I am really curious to see it. I love the idea of Book as Object...I still love making "things"
Congratulations!