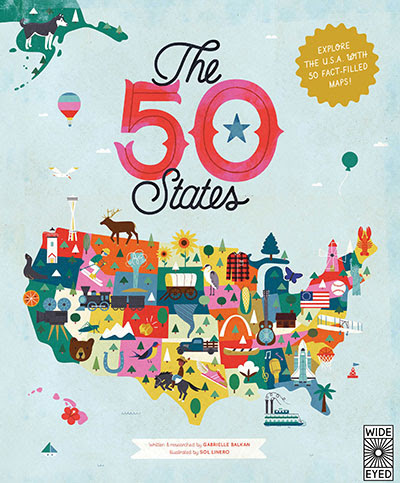 I lived in Georgia and Tennessee for most of my adult life, so why did I ask to feature Virginia for this latest anthology of fun maps and facts, THE 50 STATES, written and researched by Gabrielle Balkan and illustrated by Sol Linero (Quarto Publishing Group)? Because, I spent most of my childhood, the early years, in Virginia. At 6 months old, we moved to Manassas, Virginia - where my sister was born. And although we moved to Atlanta on my 5th birthday, I traveled to Lexington most summers to stay with my grandparents.
So, when I got the job to teach Picture Book Design in the MFA in Writing and Illustrating Picture Books program at Hollins University in Roanoke, Virginia, it was like my life had come full circle. How strange to remember the smell of the boxwoods, and how there are bunnies everywhere! Virginia has become our US base, and what a beautiful base it is!
Therefore, I'm proud to be the blog representative for Virginia. Click on the map to see a larger version in a new window. 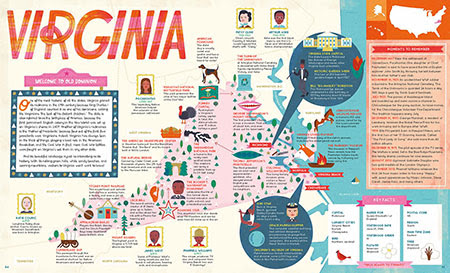 Check out some of these cool factoids pulled from the book:

WELCOME TO OLD DOMINION One of the most historic of all the states, Virginia gained its nickname in the 17th century because King Charles I of England counted it as one of his dominions, calling the Virginians “the best of his distant children.” The state is also referred to as the birthplace of America, because the first permanent English colony in the New World was set up on Virginia’s shores in 1607. Another of Virginia’s nicknames is the “Mother of Presidents” because four out of the first five presidents were Virginians. Indeed, Virginia has always been in the thick of things, playing a lead role in the American Revolution and the Civil War. In fact, more Civil War battles were fought on Virginia’s soil than in any other state. And its beautiful landscape is just as interesting as its history. With its rolling green hills, white sandy beaches, and soaring mountains, visitors to Virginia won’t want to leave!
• •
Virginia was home to POCAHONTAS c.1596–1617 This legendary Native American helped the colonists of the Jamestown settlement.
And Ella Fitzgerald, born in Newport News, wins the first two of her 13 Grammy Awards. Called “The First Lady of Song,” she sold more than 40 million albums.
Other famous Virginia babies are Patsy Cine, Katie Couric, and Pharrell Williams.
• •
In children's news, Virginia is home to CECE BELL. The award-winning creator of El Deafo grew up in Salem and writes about her life with a Phonic Ear hearing aid. It's also home to the CHILDREN'S MUSEUM OF VIRGINIA, where you can make enormous human-sized bubbles and discover some 2,000 toys and trains in this Portsmouth museum.
• •
Geographically speaking, Virginia is home to the Chincoteague Wildlife Refuge, home to 150 wild ponies; Colonial Williamsburgh, a living history museum; and Cumberland Gap, originally a shortcut for Native American Indians.
Virginia is also home to Thomas Jefferson's Monticello and The Natural Bridge.
• •
Of course, the main thing people remember is that...
VIRGINIA IS FOR LOVERS!