Not an attractive word, but it basically means a small plot of garden land in the heart of the city. We'd passed these fields of sheds on our various walks, but never thought we'd get to see one up close. And then Connie, the founder of Edinburgh Salon mentioned she had one and did I want to see it? OMG, yes! 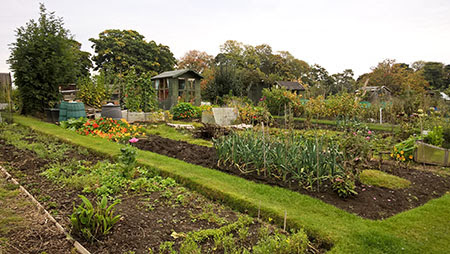 Did you know I used to be a huge gardener? I even got my Master Gardeners Certification way back in Tennessee. I used to LOVE to garden - and WEED! Seriously, it's like therapy. Gads, how I've missed getting my hands in the dirt - and what lovely dirt it is here! 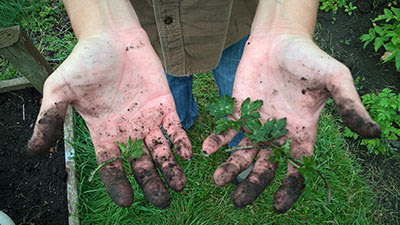 But life kept getting crazier and my room with which to garden has slowly diminished over the years as we ave moved further and further in town.
It's why allotments exist, so that city-bound folks with a green thumb can still exercise their passion for all things growing. (And I imagine these gardens would come in handy if there were ever a national crisis too. I may be wrong, but I think the concept grew out of the "Victory Garden" crazes between the World Wars.)
At any rate, the demand for these little patches of heaven is high and they can take years to get one. Connie finally wrangled it after years of trying, and she now has the sweetest little spot with an amazing view of the castle.

In fact, she keeps a fire pit (under the tarp) with chairs and several folks watched the closing fireworks for the Fringe Festival gathered in her allotment. Apparently, folks sometimes just come to hang out in their little gardens, and impromptu glasses of wine and small gatherings pop up as regularly as new blooms. 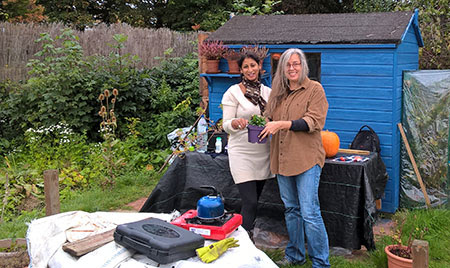 But the real excuse to go see the allotment was to show Connie how to carve a pumpkin! She wants to use them as decorations for the upcoming salon and she'd never carved a pumpkin before (it's not as big a thing on this side of the pond). You know I was more than happy to show her! So, we got to work. 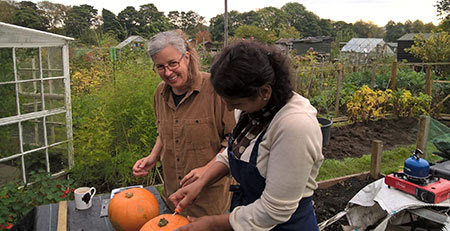 Connie is from London, so of course, we had tea as well - with milk and sugar - all transported in her back-pack and done on the tiny camping stove (to the right in the photo). She even brought beet-root brownies - delicious! She grew the beets. I swear, this woman can produce a gourmet meal with all the fixings straight from a backpack!
So, we saved the seeds so that Connie could roast them later, and we were quite pleased with our orange orbal results! 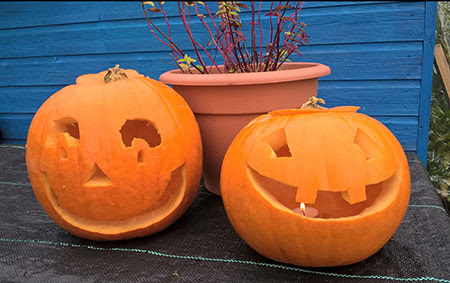 Ah! Yes allotments, a little piece of heaven with wonderful people and plants even very unusual ones sometimes and mostly HUGE. They are all over the country. I spoke to someone recently who had waited 7 years to get their piece of heaven, they already had a large garden but loved the allotment too.