Continuing my story... Friday, Stan and I took a mini-adventure to South Queenferry and Port Edgar to take part in an annual ritual - The Burryman Festival. Each year a locally-born man is covered in burrs - these things:

and paraded through the streets. (He's also wearing one of Scotland's flags as a sash - the Rampant Lion.) The entire journey, he is given money and plied with whisky to ease his suffering. Here he is heading into The Hawes Inn. 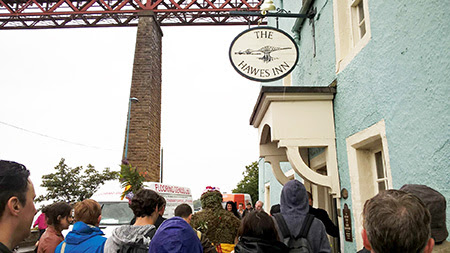 And inside where he had to sip whisky through a straw. You gotta feel for this guy. I'm not sure why somebody would put themselves through this ordeal. 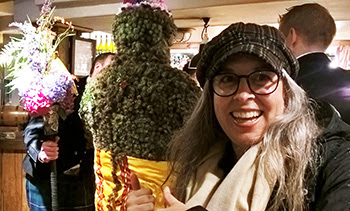 Because ordeal it is - once covered in burrs, his arms are held away from his body with flower-covered poles. Even his face is covered, so he has minders, as he awkwardly walks seven miles through the port town (which takes about nine hours) all for good luck. 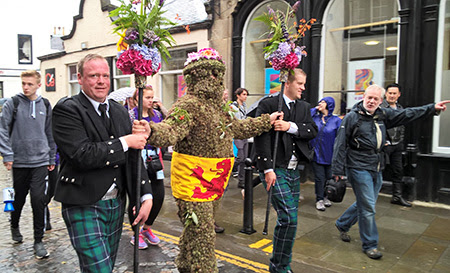 A small group of people follow along cheering, "Hip-hip-hooray, it's the Burryman Day!" A bagpipe even joined in at one point. But like I mentioned, this is not a well-known tradition and its shocking how small the crowds are. All the better for those of us enjoying the day. 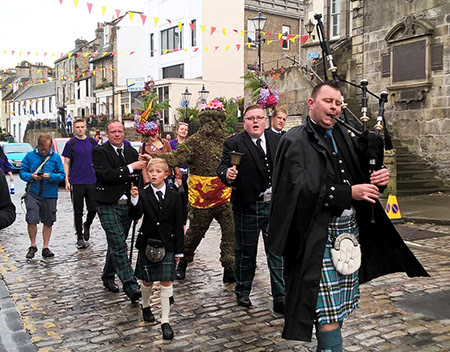 The Burryman is said to be the Scottish version of a Green Man ritual - which potentially goes back to the 1000s. Although in fact, nobody remembers how the tradition began, or why. (History from this region is often pagan or druid-based and they didn't have a written history.) According to Wikipedia, it's thought to have originated in the 1600s and there are similar-ish rituals all over the UK, such as "Buckie on the Moray Firth and Fraserburgh, to 'raise the herring' when there had been a poor fishing season; the Whittlesea Straw Bear and the Castleton Garland King (and perhaps even the Jack in the green) in England." It's thought that the tradition is meant to ward off evil spirits. Or that it is a symbol of rebirth and fertility, like the Green Man. Whatever the reason, it's a good excuse to play and act silly.... 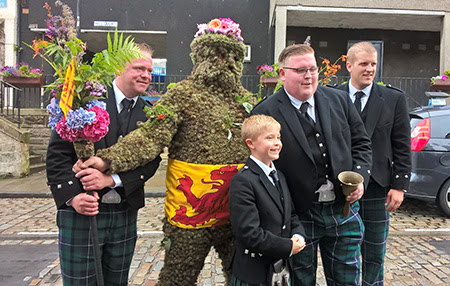 And boy does this guy earn the respect of his neighbors - they actually had to cut the burrs off of him at the end of the day. Surely, some good luck was earned! I like to think a little bit of it rubbed off too, as I returned home with a burr stuck on my cap.
If you ever make it to Edinburgh in the second week of August, this is a quirky tradition to be a part of. I'm glad we went!
at August 15, 2016