Visitors and FRINGE - kick off!

An old college professor of Stan's, Charlotte Headrick, is visiting from Oregon State, where she just retired as head of the drama department there. Charlotte is passionate about all things theatre, which is why she had to come to FRINGE. So is her friend Hanns Hohmann of San Jose State University, who met her here. I have to admit, if it weren't for these two entertaining people, we would have missed out on some very cool performances.
Saturday we began the day with Vivaldi for Breakfast. This was a short little musical about the very sad life of this amazing composer. Did you know that after creating over 500 pieces of music, and creating an all-girl orchestra, his reputation was ruined by an inquisitor for the Spanish church under suspicious causes? Vivaldi died penniless and broken and his music disappeared for 100 years until somebody noticed that Bach attributed one of his pieces to Vivaldi and he was rediscovered. Can you imagine our world without "The Four Seasons"? Gads. 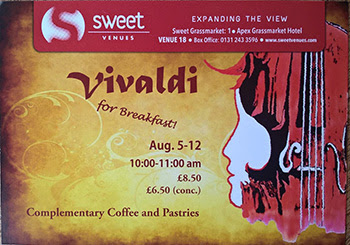 We had lunch at one of our favorite restaurants, Under the Stairs, where the play write, Matthew Spangler, and the star of the next performance we were to see, Benjamin Evett, joined us... 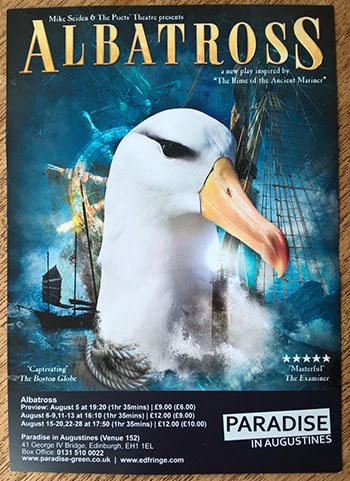 The second performance, also written by Matthew, was Albatross. It's a commissioned reframing of "The Rime of the Ancient Mariner." It's a one man show and it is gripping. Be looking for it to travel off Broadway soon! I have a feeling this one is going UP. 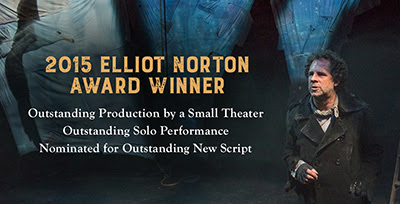 After the amazing show, the cast and crew gathered at Hotel du Vin Bistro for the official fall-apart party. What a fun event to be a part of! I met the most interesting people, from established actors, directors, writers, stage designers, lighting managers, you name it. There's a lot of people and work that go into any performance and I learned so much. What a hoot!
at August 08, 2016