I mentioned that Hollins University sent me to the Bologna Children's Book Fair this year, so I wanted to talk more about what that entailed. I'd never done any international student outreach before, so this was new. But it made so much sense for me to be a voice for our Hollins Children's Literature Graduate programs since I'm so close and wanted to go to the fair anyway. It worked out to be a win-win for everyone!
First, was the schwag - brochures, posters, business cards, etc. to help me make a splash. 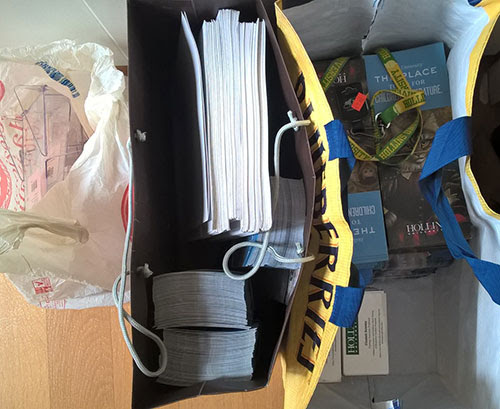 Each day at the fair, I put up posters with artwork by our own Ashley Wolff. 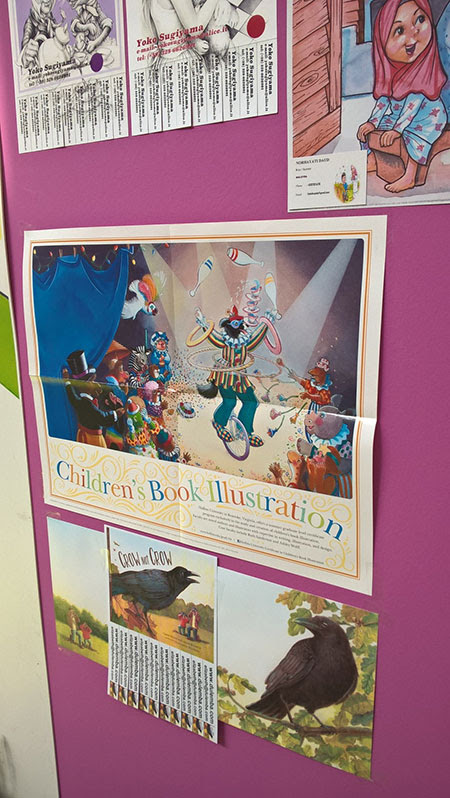 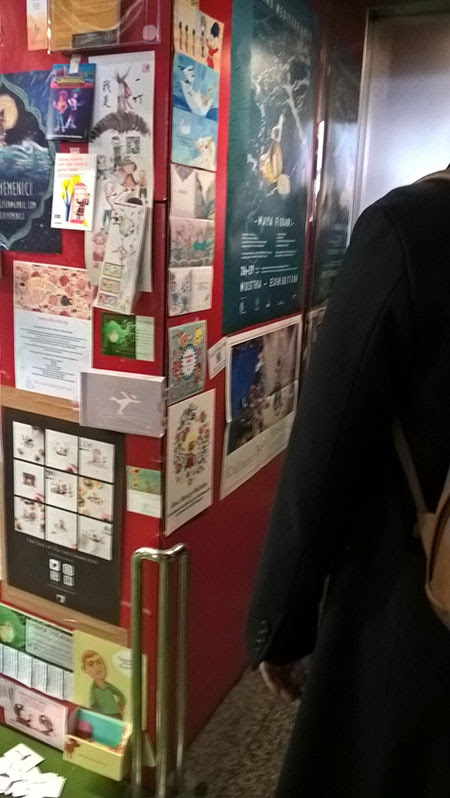 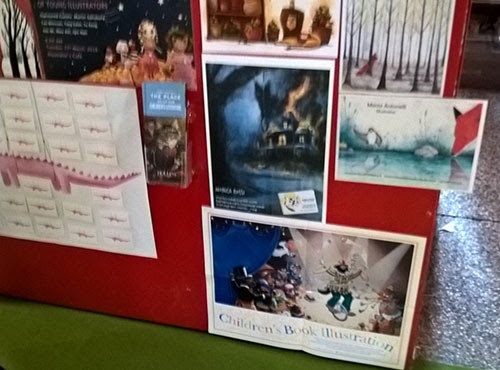 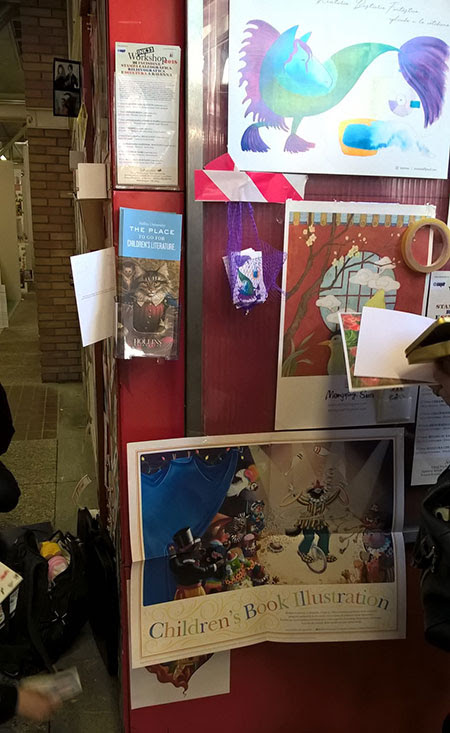 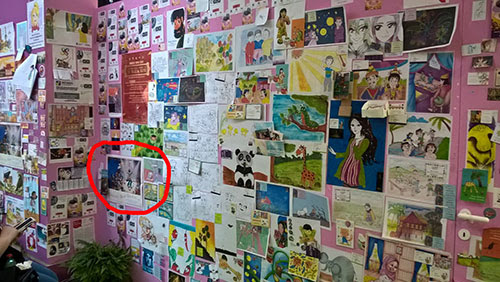 Alongside my own work in some cases. 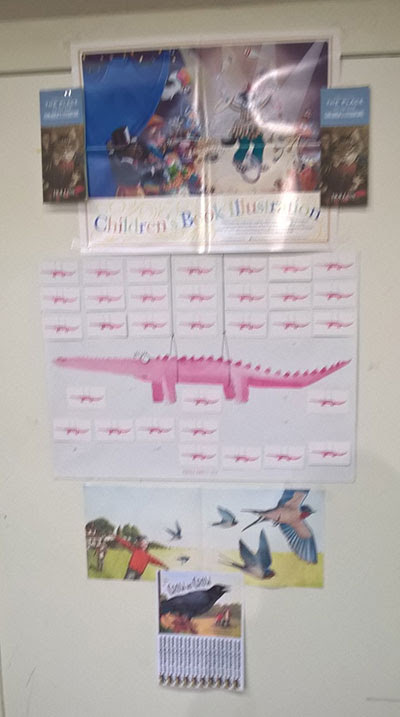 I also put out brochures everywhere, with artwork by Ruth Sanderson. 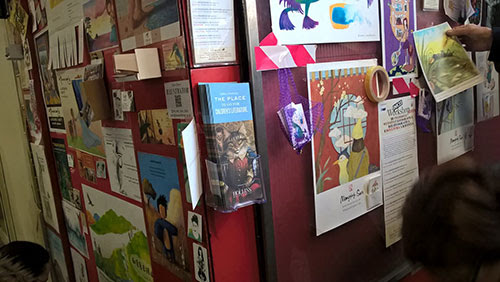 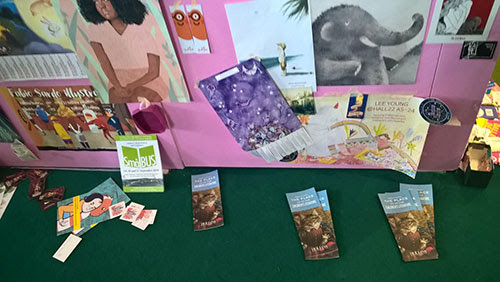 Just putting up the signage drew some attention. These ladies asked to have a picture with me, which gave me a chance to talk about the programs and give them brochures. 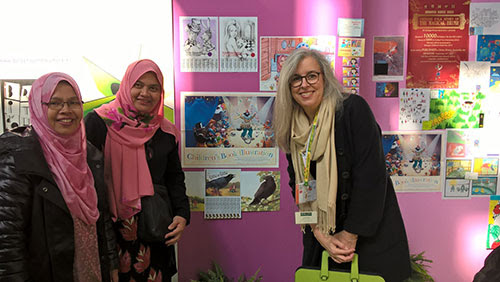 Another thing that worked well was the Qs for Illustration Surgeries. Several publishers held these critiques, and the lines began a good hour before they opened. So, not only did I get to meet some awesome people around me, like Meria Palin from Finland. 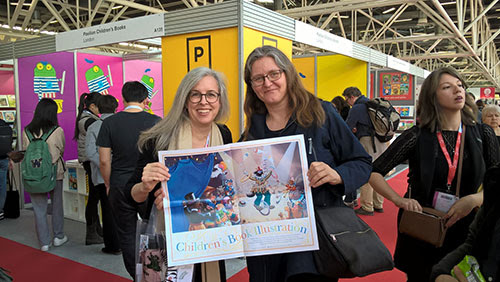 I also got to hand out the posters and brochures to everyone in the Qs - like this one. AND I got some valuable reviews of my work while I was at it! Happily, several folks smiled and said they had already grabbed the brochures from elsewhere, which meant I was getting them spread around well! (I also got some great questions.) Truly, the best way to get the word out is to spend some time getting to know people. That human connection makes all the difference, and it's a treat for me. One lovely connection I made was with a potential student from India who happened to be at the fair. We met up for lunch and a walk-about. I met some of her publisher friends from India, and we talked about Hollins. Email just can't replace a face-to-face opportunity like that!
Towards the end I still had quite a few posters left, and no room in my suitcase to carry them home, so I put out a pile as souvenirs from Bologna and Hollins! 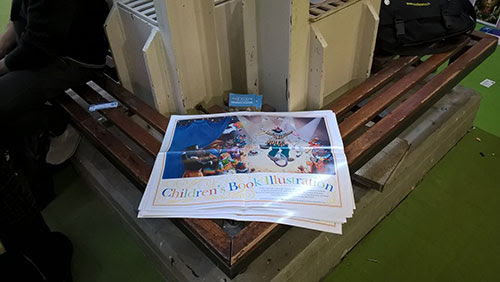 My outreach didn't just happen at the fair. I'll be doing a write-up of my experience for the SCBWI Bulletin, and I also got to talk about the programs with new friends at an Illustrators' Dinner. More on that in my next post...

I spied with my little eye at least two spreads from Crow Not Crow!

So jealous. If I could only swing (financially) Bologna.