A new exhibit recently opened at Winthrop University in the Rutledge Gallery called THE DEMOCRATIC CUP.

It is a potters' solution to the divisiveness makers observed during the last election cycle to bring people together over the simplest ritual - a cup of coffee or tea. As such, they worked with artists and potters from all over the country to make a series of cups that, they hope, will invoke conversation. Such as this cup designed by Ayumi Horie with an image of Liberty and Justice by Kolby Senrick. 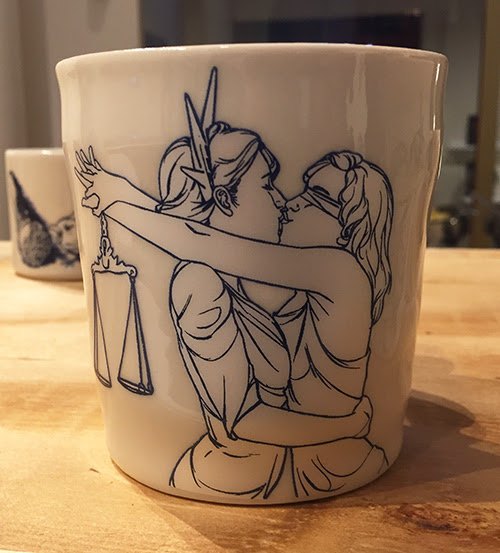 Each cup sat above it's title and a bio and commentary by its artists, such as this cup called "Protect the Vulnerable" designed by Marc Digeros with artwork by Lisa Congdon. 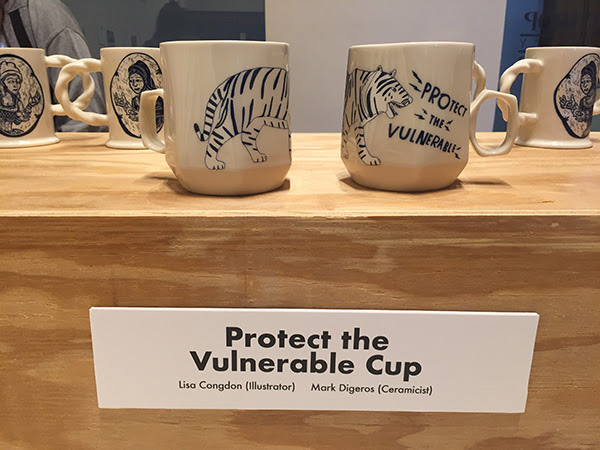 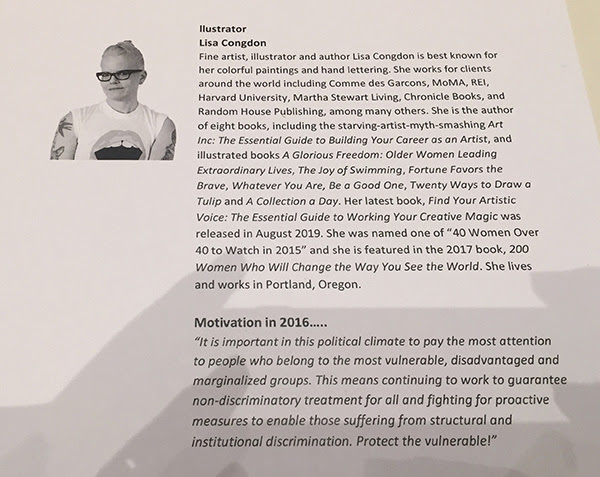 Some were entertaining commentaries on serious subjects, such as this commentary on vaccinations designed by one of the organizers, Ayumi Horie, and illustrated by children's book illustrator Sara Varon. 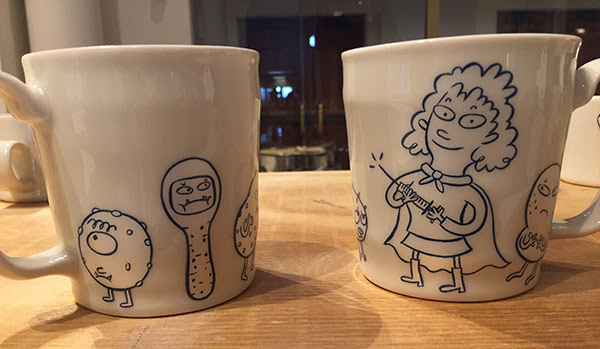 Others were very serious depictions of very serious subjects, such as the 'What Did I Do?' cup designed by another of the project's organizers, Nick Moen, with words by Danez Smith and images by Klai Brown. This cup honors those killed by police violence. 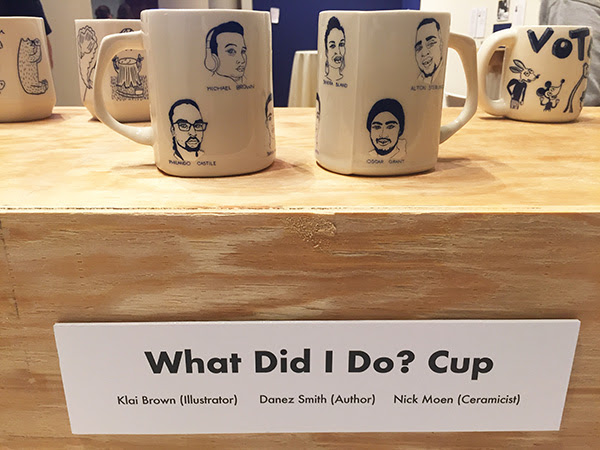 I especially liked the 'Common Good' cups with a donkey on one side and elephant on the other. Glazing was intentionally left off of spaces for people to fill in their ideas of Life, Liberty and Happiness in pencil. They also had slightly rounded bottoms that made them wobble, which indeed made me happy. 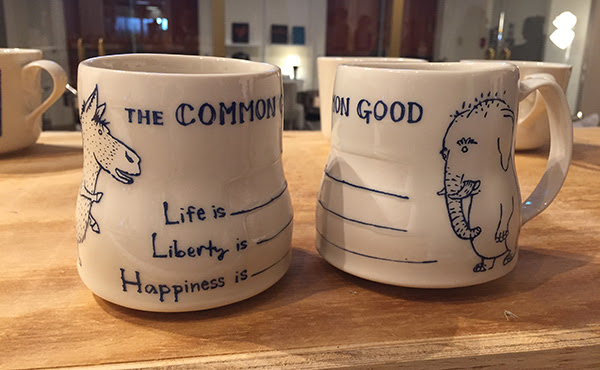 Of course, the most profound cup to me was the strong reminder to.. 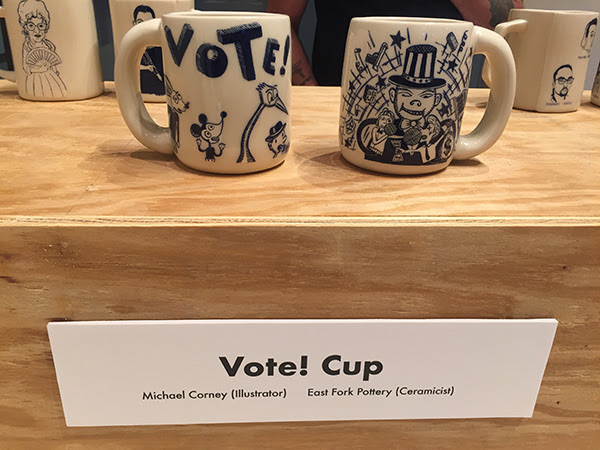 After the opening reception, we all gathered in Dina's Place, the large theater in the DiGiorgio Campus Center.
Winthrop came up with a great idea to get students to attend some of these great events - each semester they are required to have a certain number of 'cultural events' under their belts and this was one of them, so it was a pretty full house. 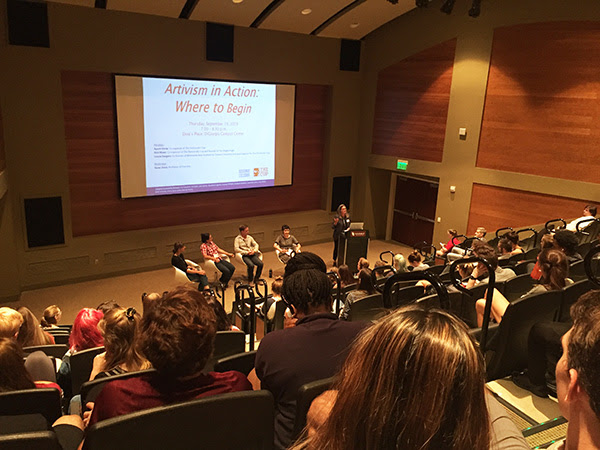 The creators of The Democratic Cup talked about its inception, and the complexities of working with makers all over the country. 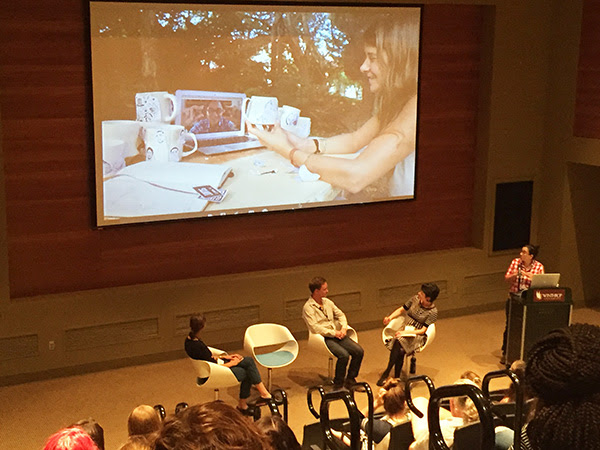 And while the political leanings of The Democratic Cup were pretty clear, they are indeed wanting to invite conservative voices into the conversation.
Meanwhile, I recently learned something quite interesting about Winthrop. It turns out there's a saying here: "The path to the White House goes through Winthrop University." And it seems to be true. Several of the candidates and all of the recent Presidents have indeed come through Rock Hill and spoken at Winthrop University over the last few years. It makes for a very interesting place to be as we wind into this next election cycle!
Cups are available for purchase, at prices that pay the artists living wages (even so, the project is a labor of love and never broke even). Check them out at their website: THE DEMOCRATIC CUP.
at September 22, 2019

This is a nice article, it good for us and others.