What's Old is New Again: Art of the Ancient Americas

When Stan and I went to The Mint Museum (Randolph) the other weekend to check out the Tony DiTerlizzi exhibit, we had to walk through their 'Art of the Ancient Americas' exhibit to get there. It warranted more time than we had to give it. Here's what the Mint's website says about it:

The ancient New World, one of the illustrious cradles of human civilization, is featured at The Mint Museum. This wide-ranging collection showcases more than 2,500 artworks from the ancient Americas. The museum’s collection, the majority having been donated by Dr. and Mrs. Francis Robicsek, is one of the largest in the United States, spanning 4,300 years of artistic creativity from 2800 BCE to 1500 CE, and presenting more than forty of the major societies from ancient Mesoamerica (Mexico, Guatemala, Belize, Honduras, and El Salvador), Central America (Nicaragua, Costa Rica, and Panama), and Andean South America (Colombia, Ecuador, Peru, Bolivia, and Chile).

(All of these images can be viewed larger by right-clicking on them to read their descriptors.)

Some of the pieces fell right in line with the gruesome human sacrifice stories you've heard about. (Only click on this image to read the descriptor if you're okay with being grossed out.) 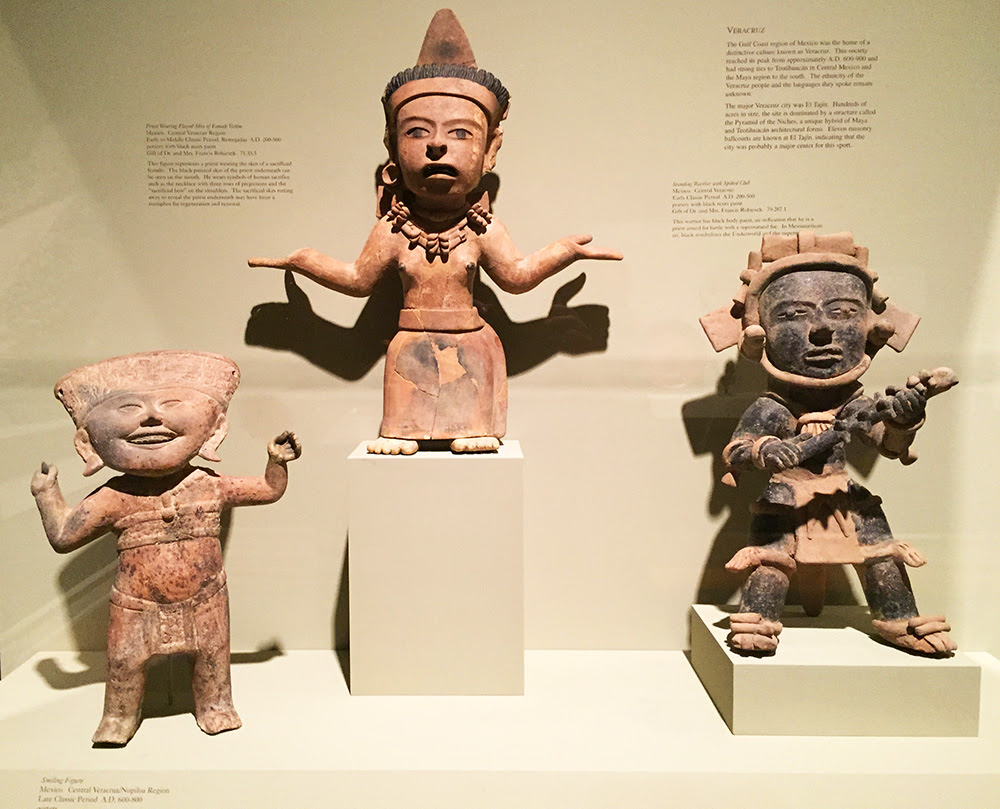 But most of what I saw was downright beautiful (not gross at all) and modern-looking - take this Nascan/Peruvian vulture image from 100 B.C. to 100 A.D. for instance. It looks like modern-day poster art! 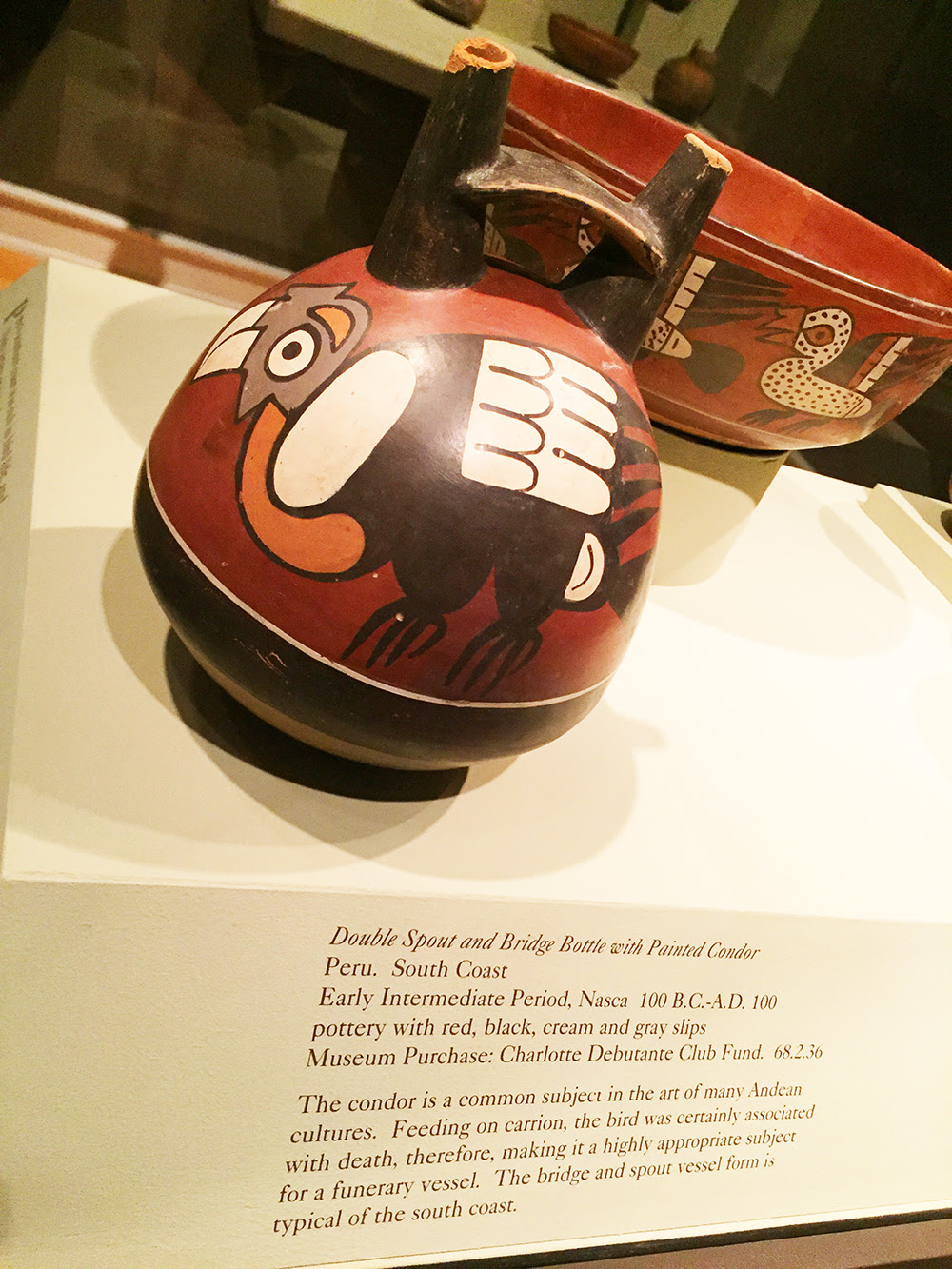 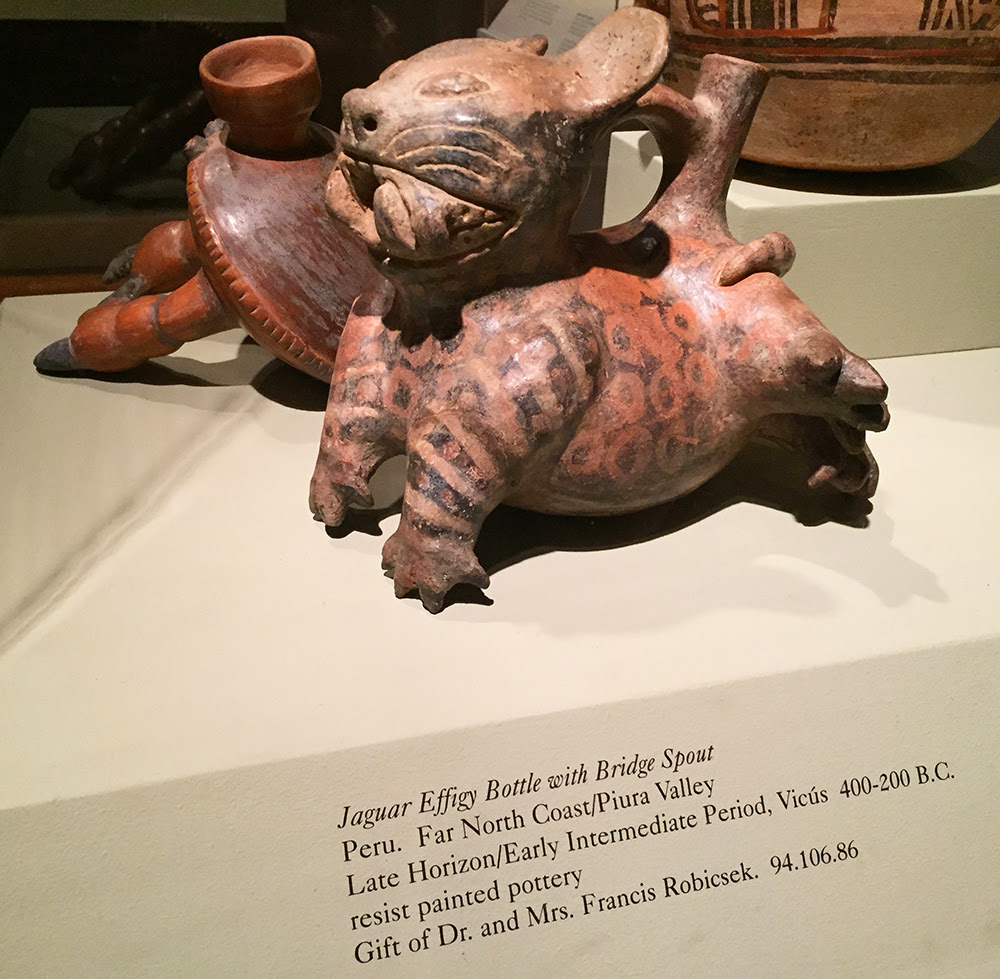 Truly, we try to teach students how to stylize images, find their creative voice. Well, the early Americas have had a wealth of that going on throughout ancient history! For instance, I loved this earthenware woman from Peru, 1000 - 1400 C.E. 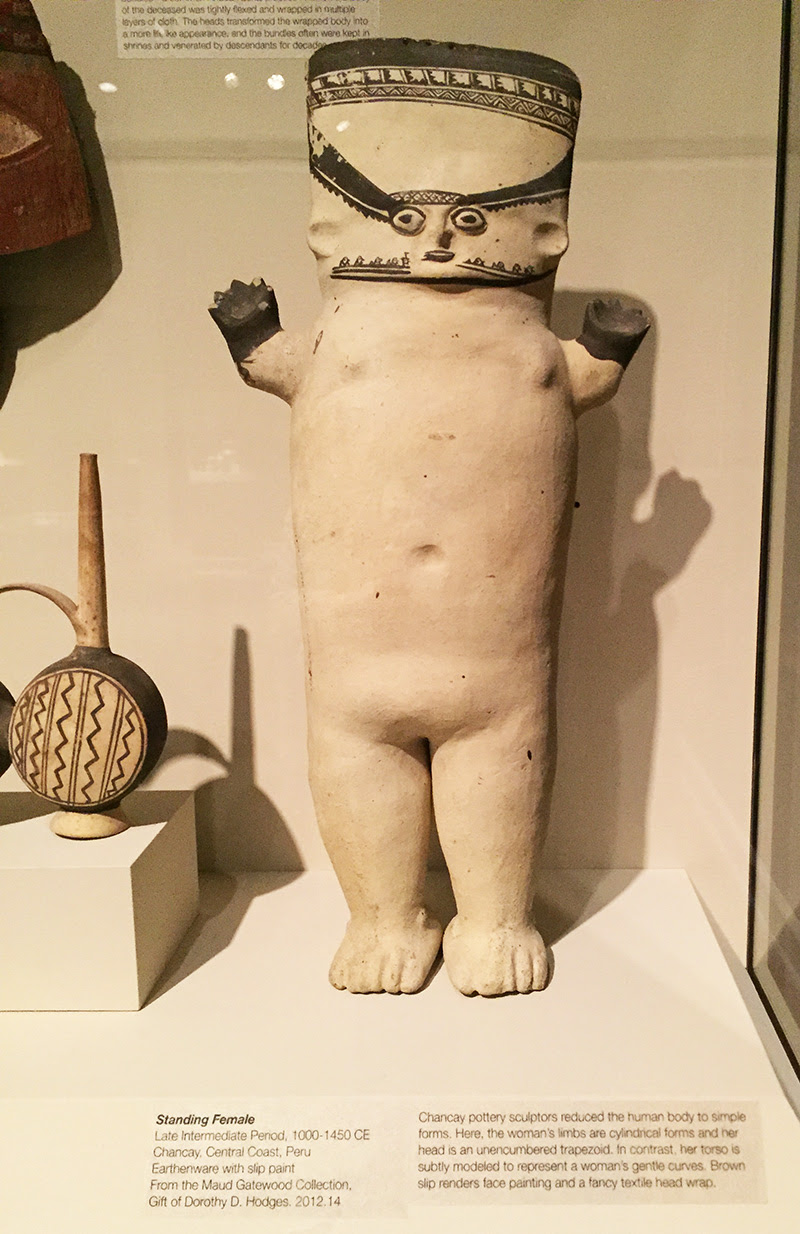 I also love that the women were revered in these ancient societies, like this female effigy from Costa Rica in 800-1200 CE

"Throughout ancient Central America, women are rendered in their role as creators and nurturers of children, as well as holding principal ritual positions in social and religious institutions." 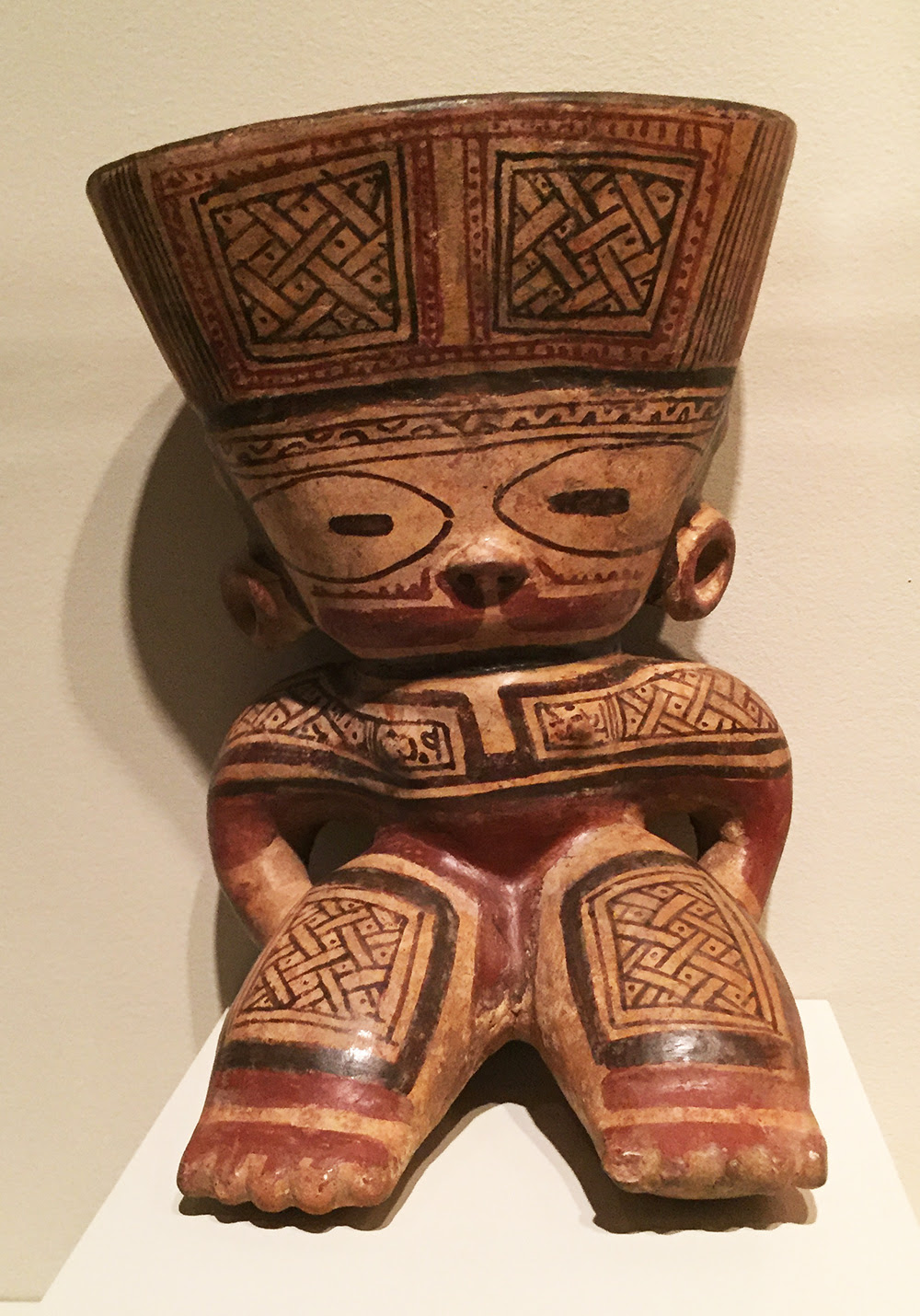 Perhaps they weren't as objectified as women are now? Certainly, not in the same way!
Best of all, it was obvious they had a sense of humor - as demonstrated by this Mayan incense burner from Guatemala in 600-900A.D. 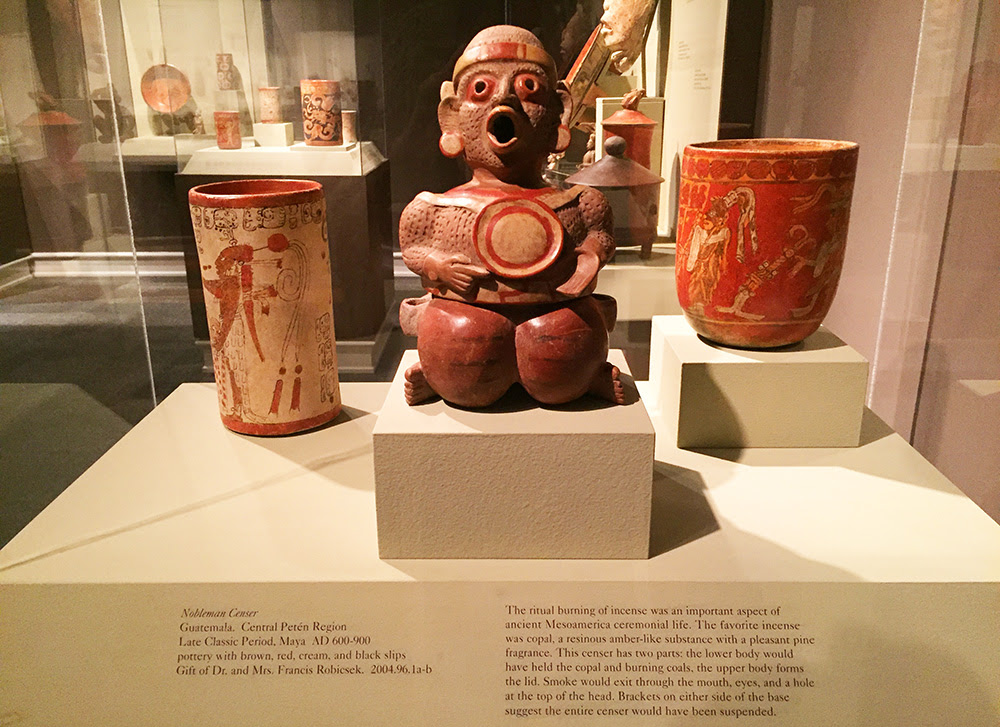 They also had a sense of wonder and magic, as demonstrated by this effigy of a dwarf. 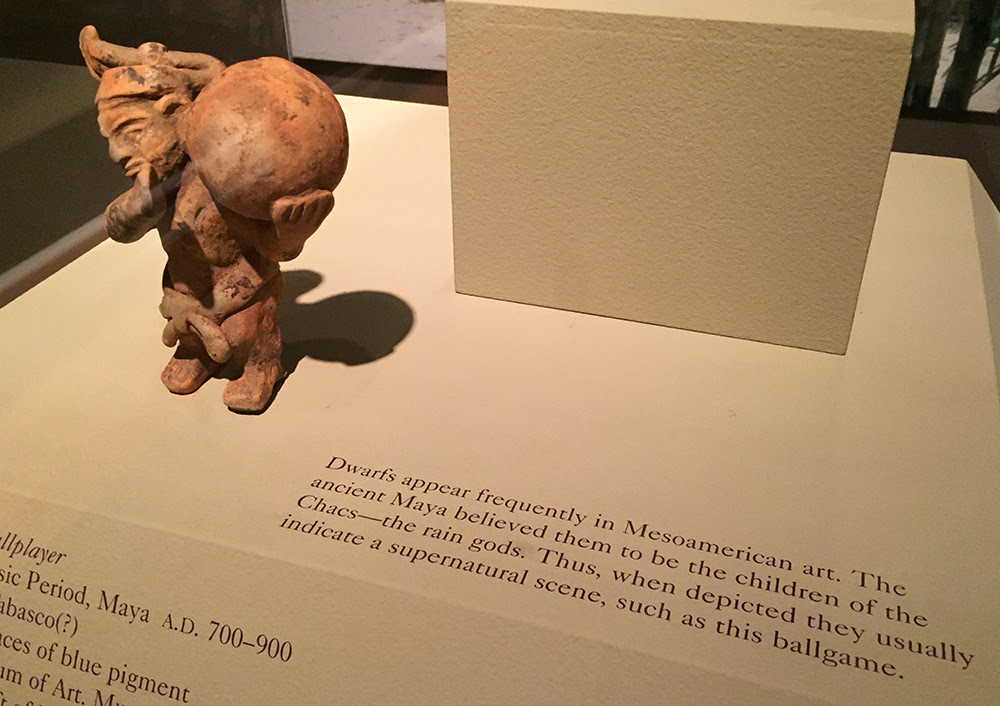 The exhibit states that "The ancient Maya believed them [dwarfs] to be the children of the Chacs—the rain gods."
All said, except for the sacrifices, they didn't seem all that different from us, and they were most certainly lovers of art and beauty... beauty that can still influence our art today!
I hope you can make it to The Mint Museum (Randolph) to see the exhibit in person, as there are about 2,490 more pieces to see. It's really remarkable!
at September 18, 2019

Oh, thanks for the mini-tour, e! The Orlando Musuem of Art (Loch Haven, when I was growing up) has a pre-Columbian collection that always fascinated me. :0)
[On an unrelated note, speaking of wondrous, my copies of Merbaby's Lullaby are on the way - one for me, and a couple more for gifts! XO ]