Today we did the Royal Mile and I made a point of taking more pictures for you guys. But before we went, we ran up to Castle Terrace where they have a Farmer's Market every Saturday. We bought wild venison and wild garlic sausage to use for tonight's dinner. (The woman selling it said she'd harvested the garlic from the fields around her farm the day before.) 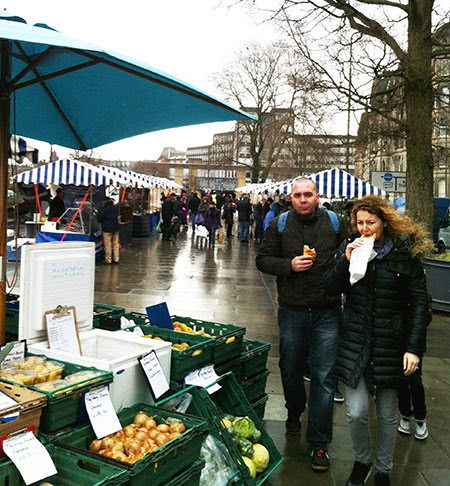 Yes, it was a rainy, windy morning (although not cold). Many folks just forego umbrellas because the wind either turns them inside out, they become dangerous weapons which might put out an eye, or the rain comes in right under them anyhow. But it's still bearable. ALL of the weather is bearable here, despite it's reputation.
We also picked up one carrot, one parsnip, two potatoes, two onions, four mushrooms, and one wee head of cabbage (everybody says "wee" here and it is my new favorite word - like in "The Wee Free Men"!). Stan is making me a hearty stew as I type - so I have more time to share some details with you.
SO! Back out, we headed to The Dogs for lunch - which was FABOO! It's up in New Town. We really like that part of town, but have decided it may be too far from the College of Art to be our residence. At any rate, after lunch, we headed for one of the main tourist destinations here - The Royal Mile - THE hot spot during The Fringe Festival in August... 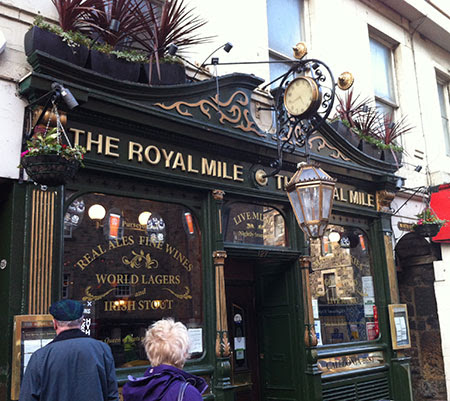 No, it's not just a pub. It really is a mile - High Street or Canongate, as a matter of fact. And most of the partying centers here. The Royal Mile is a true tourist destination, so the local businesses play up everything Scottish, like Rabbie "Robert" Burns, a poet and local hero from the 1700s (author of Auld Lang Syne - 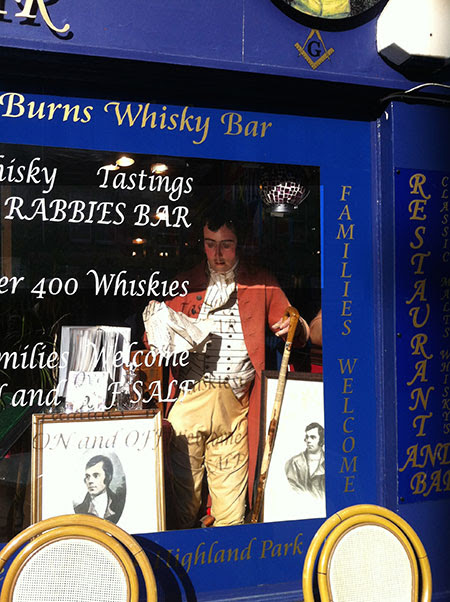 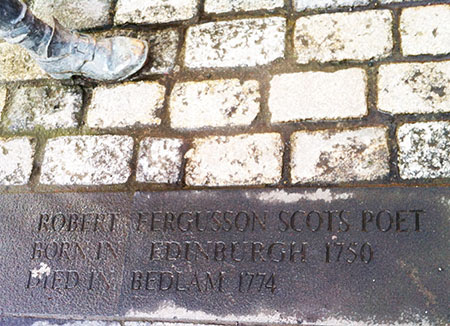 With whom I had a lovely conversation whilst walking... 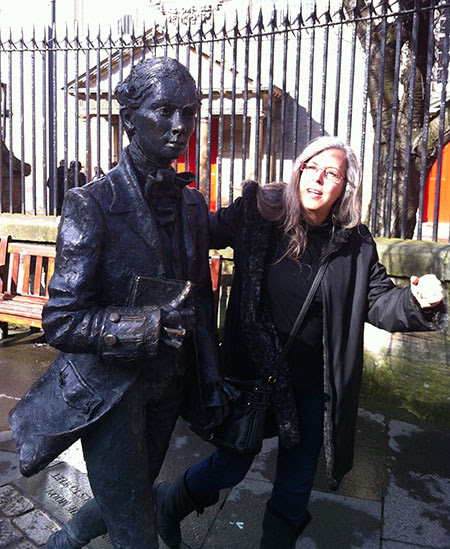 Despite the touristy nature of the road (which really isn't too over-the-top), there are some very cool random things to spot... 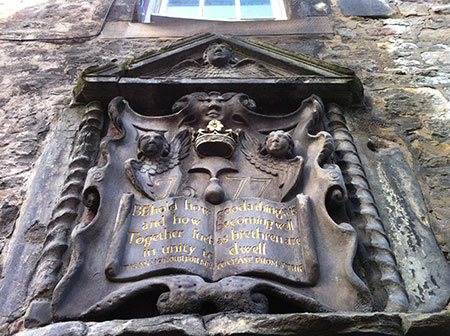 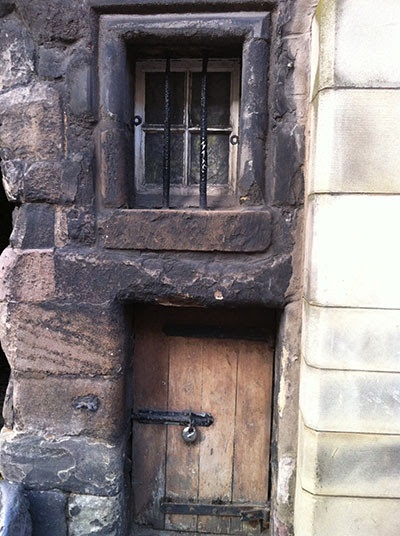 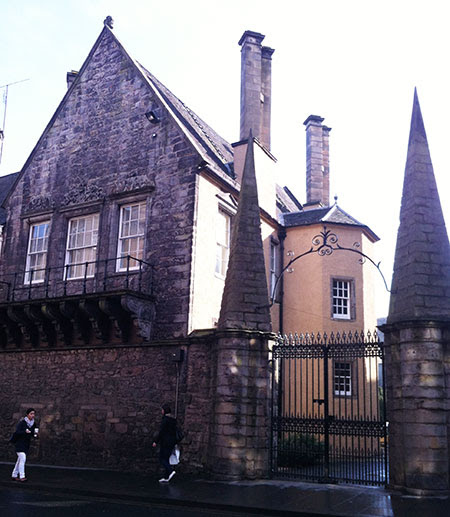 Including the John Knox House, which is the oldest house still standing on the Royal Mile: 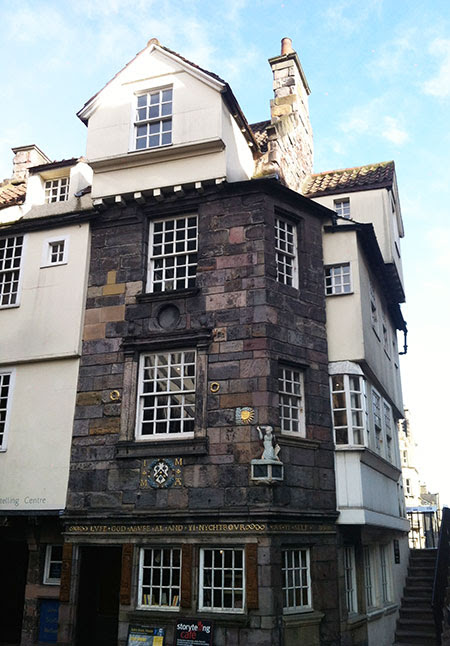 (Did you notice the subtext on The Royal Mile pub window? "John Knox probably drank here." HA! Not.)
At then end of The Royal Mile sits Hollyrood Castle - it's where the British Royal Family stays when they're in Scotland: 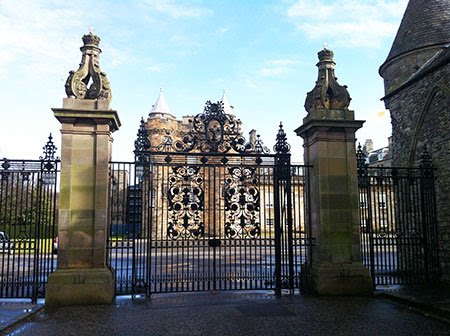 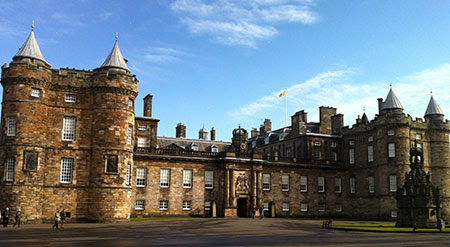 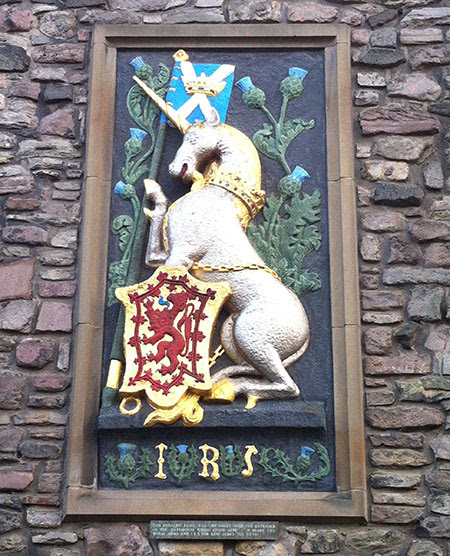