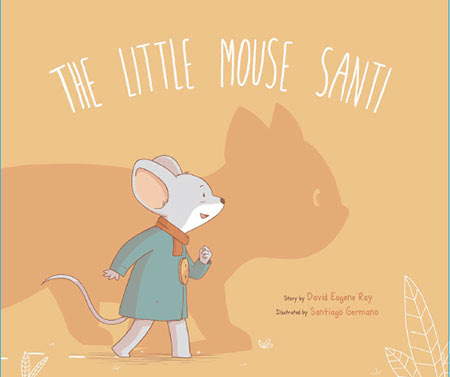 Going the indie route to publishing a children’s book
By David Eugene Ray, author of The Little Mouse Santi

In one way, the story of The Little Mouse Santi struck like a bolt of lightning. I made up the story in November 2013 for my then-two-year old son, Louis. I sat in the rocker spinning the tale while my wife held him. I often make up animal stories, and this story about a little mouse who dreamed of being a cat flowed easily. At the end, we all had a good laugh. When we walked out of the room, my my wife said, “You need to write that one down.” Once on paper it seemed to hold up, so we fussed with some of the wording until we were satisfied. I thought that was that, but my wife, who writes children’s music, had other ideas. While working on another project for a children’s music video, she had run across an artist named Santiago Germano whose work she loved. After showing me his portfolio, she laid out her plan to bring my story into full bloom as a children’s book. We contacted Santiago and he delivered a beautiful preliminary sketch of a mouse looking out of a mouse hole, with perfectly expressed longing in his body language. It was a rear view, with light streaming in casting the shadow of a cat. We knew we had the right artist.

Creating the book was a painstaking, detail-oriented (but fun!) process that took 11 months from the time the story was told for the first time to the day we were holding the book in our hands. Santiago lives in Uruguay, and just 20 years ago working with someone that far away would have been nearly impossible. But technology now allows connections between creators around the world. Sketches came, discussions took place, and the book came to life (a great deal of this life came from Santiago’s vision and how he made the mouse “real”.) We learned a lot about layout and structure as well as trusting our illustrator’s talent and knowledge. We forged a friendship, and even named our little mouse after Santiago.

This next bit will come as no surprise to any creative type: The biggest challenge to this process has been figuring out the business side, printing and distribution. We pitched the completed manuscript, with illustrations, to several carefully researched children’s book publishers, but only have had two responses to this day (and both were kindly worded rejections). After talking with other children’s authors we know who’ve done it, we decided to form our own LLC and publishing company to get our book out there, Confetti Park. Again, in 2015, technology makes this possible, when only a decade ago, obstacles would have been insurmountable. (It certainly is key that my wife is already plugged into children’s entertainment, media, and marketing.)

Several of our associates have recommended crowdsourcing to generate the funds to print a book… the recommended route is to create a video showcasing the completed book, then pre-sell it on a site like Kickstarter, Indiegogo or Patreon to generate the funds. This time around, we used our own savings to pay for printing, with the knowledge that recouping expenses will be an ongoing process.

The book was released in January 2015 and now, the real work begins. Promotion and distribution continues and will be for years to come, I expect. But, we are committed! We are always looking for creative ways to promote the book. My wife, as I mentioned, writes children’s music and directs a children’s choir. We co-wrote a song for the little mouse, called “Dream Big, Little Santi,” that will appear on a CD she is releasing in April 2015 through our publishing company, Confetti Park. We hope follow up books and musical projects will all cross-promote and help keep a little mouse named Santi relevant.
It’s been a wonderful ride so far. We’re having fun and being creative. Whatever comes is welcome. Funny that, for me, this all started simply as a project to get a little boy to go to sleep. 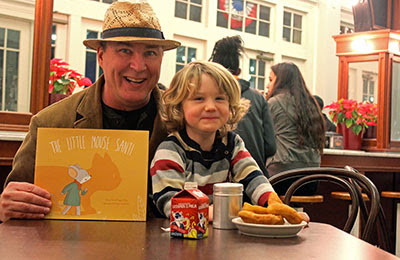 David Eugene Ray lives in New Orleans and is an educator at the Audubon Nature Institute. The Little Mouse Santi is his first published children's book.
at March 12, 2015