If you've ever read or watched Dan Brown's THE DA VINCI CODE, then you've heard of Rosslyn Chapel. It's where the movie concludes, where they discover Sophie's lineage. And while it put the chapel solidly on the tourist map, it's actually been around for over 9,000 years. 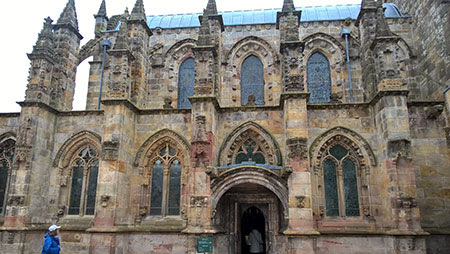 Good friends Prescott Hill and Lisa Michaels recently came through Edinburgh, and Lisa was keen to visit the chapel. We've been saving these tourist destinations for exactly such situations so that we can enjoy them for the first time with friends.
The bus trip down was easy peasy. We picked up the #37 from North Bridge at the whopping price of £1.60. After a relaxing hour winding through the Scottish countryside, we reached our destination. 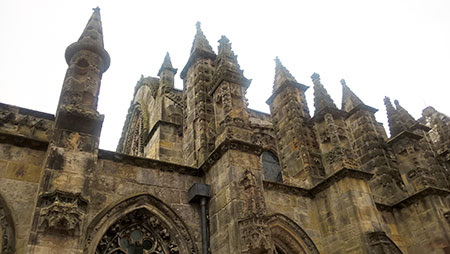 A tour bus also arrived about the same time, but the new visitor's center and professional guides handled the crowd beautifully. They hand out laminated fact sheets with images of key points to look for inside the chapel. No photos are allowed inside this still operational church, so do visit the website to get a peek.
The chapel was originally supposed to be just the top portion of a much larger cross, but money ran out. Over the centuries (!!) the chapel has gone through periods of disrepair and neglect, but it somehow survived Cromwell (by becoming his stable) and nature itself when there were no windows to keep out the rain, wind and vines. In the 1800s the chapel was enclosed and a new entrance was built on. You can really see the difference in the stone. Can you imagine what it must look like during a beautiful sunset? 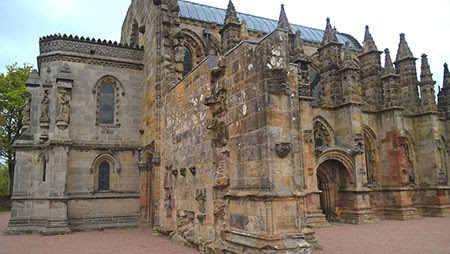 Unfortunately, some of the attempts to save the chapel weren't done well. At one point, a cement slurry was painted over everything inside in an attempt to save it. But the wet environment only caused moisture to build up under the slurry, causing worse damage. It also homogenized the colors. THIS is what the colors looked like at one time - this is a grave outside the chapel. 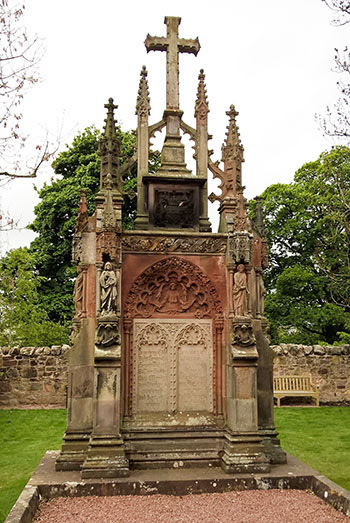 The book and the movie were a huge boon to the chapel, though. Visitors bring in money and the preservation of the chapel is actually ahead of schedule. Very cool as the chapel really is remarkable and lovely. It even has underfloor heating now, to keep out the damp, which makes it quite comfortable inside. 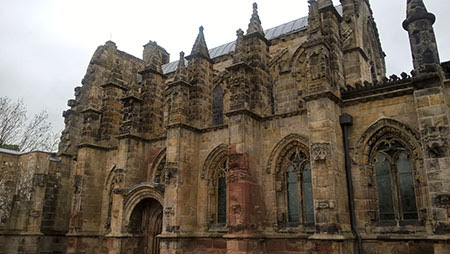 It's also full of stories (not just The Da Vinci Code). Such as the story of the master and the apprentice... Sir William St. Clair is credited with founding the chapel in 1446. Back then, it was believed that you could buy a fast track to heaven by building a beautiful church. So, there was no lack of money or artisans. Sir William even traveled to Italy to find inspiration. There he came across a lovely, spiral column. He had a model made of it and took it back to his master craftsman. Sadly, it was beyond the man's skills. But he wasn't about to let on. He said he needed to see the column in person. While away, his apprentice figured he could create the column. So he did. He thought his master would be so pleased. He wasn't. He went into a jealous rage and hit the apprentice with a hammer, killing him instantly. Realizing what he'd done, he ran. But he was soon captured and hung for the murder. Not very church like. Hm.
But there were more craftsmen to be had. So many, in fact, the local town of Roslin was established to house them all. There, we stopped at the Original Rosslyn Inn for lunch. Prescott had the traditional fish n' chips. 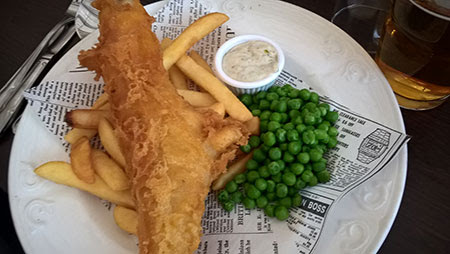 We didn't get a photo of the four of us at Rosslyn Chapel, but I do have some from their Edinburgh adventure - coming soon.
at May 23, 2016