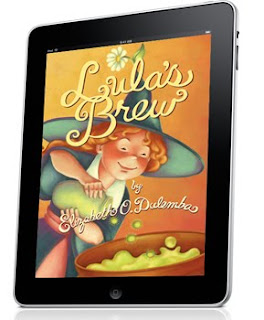 Hubbie and I bought an iPad Saturday, and so far it's very cool and very interesting. Please pardon the cross posting and the ego flare, but my picture book app LULA'S BREW is STUNNING on the iPad. Freaking Beautiful!! The colors are smack dead on, you can see my brush strokes, the light is gorgeous, it's crisp and gorgeous. The sound is awesome. As an illustrator I am THRILLED with the way Lula looks on this device. Truly - if I was Steve Jobs I'd be holding up an iPad with LULA'S BREW saying "Look at what this baby can DO!!!" (Okay, ego back in check...)
As for the rest of it...
Gotta say, the color, the screen, the sound - all GLORIOUS!!! A few hiccups here and there. Some apps crash (none of the developers were able to test their apps before the iPad became available). When you buy a book in iBookstore, it loads to your bookshelf (tiny icon), and when you click on the book it opens to page 1 - not the book's cover. That's weird.
I was hoping Lula would have more visibility since it's one of THE first picture book Apps available for the iPad, but there are some search features that almost act like 'front of store' placement, hm. (There's a drop down feature as
you type in your key search word that makes 'suggestions.') And of course, books and apps are sold in different places on the iPad - they are currently not treated like the same things AT ALL which leaves me wondering how picture books like mine will be found in this new environment.
iBookstore does have one free 'picture book' - Winnie the Pooh - available. There seems to be a restricted area where an image (obviously a pdf) can be displayed - so it's nowhere near the full bleed luscious picture book look we all love - more like awkward vignettes.
Facebook runs AWESOME on it. The keyboard works great although you wouldn't want to actually write on it (we got a bluetooth keyboard to do that). And you can buy Pages to write, but WORD isn't available for the iPad right now.
Hubbie and I are fighting over the iPad already. It's very, very cool. Obviously still a brand new thing (we feel like beta testers) but very, very cool.
Oh! And Stan is already watching ABC on the thing. (No hulu yet as it runs via flash which Apple refuses to support, and fancast is there but requires a monthly subscription.) He turned off the tv and said "What tv? We'll never use it again!" We'll see.
SO! That is my review so far... I gotta go play with the new toy some more... if I can get it away from my hubbie.
If you'd like to learn more about LULA'S BREW, go to http://dulemba.com/ActivityPage-Lula.html

Read more reviews of the iPad:
Apple iPad Review: WiFi Model from MacNews
The iPad Meets the Children's Book (from PW)
at April 07, 2010