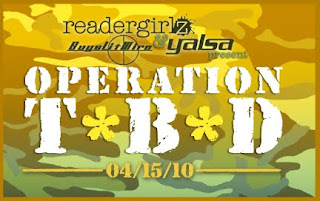 Operation Teen Book Drop is April 15th and I can't say it better than they do:

In 2008 and 2009, readergirlz (http://www.readergirlz.com), GuysLitWire (http://guyslitwire.blogspot.com), and YALSA (http://www.ala.org/yalsa) orchestrated publishers' donations of nearly 20,000 new young adult books to hospitalized teens across the country. For 2010, If I Can Read I Can Do Anything (http://www.ischool.utexas.edu/~ifican) has joined forces with these three organizations to drop thousands of new YA books, donated by publishers, into the hands of teens on Native American reservations. Nationwide, librarians, authors, and teens will drop YA books in their own communities on April 15th, 2010, to raise awareness for Operation TBD 2010 and Support Teen Literature Day. Everyone will join an online party that evening at the readergirlz blog (http://readergirlz.blogspot.com).

What an incredibly cool thing to do. Visit Readergirlz to learn more!
at April 12, 2010