I have a treat for you today! Author Aaron Reynolds (of CARNIVORE'S and DESTRUCTOSAURUS fame) and author/illustrator/editorial cartoonist Matt Davies dropped by to talk about their latest picture book together, NERDY BIRDY (Neal Porter Books/Macmillan). Take it away guys! 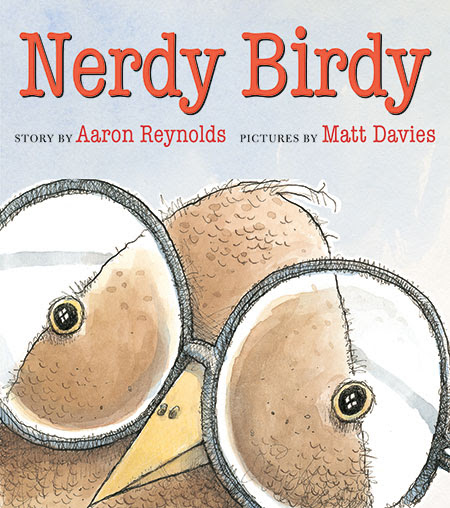 MD: First of all, I am answering these questions in a rather tasteful bar with a VERY loud piano playing guy in the background, so if my answers make no sense, that’s my excuse.
It always sounds weird when people remind me of the Pulitzer thing…I still don’t really understand how I ended up with one of those. And I must say the admiration is mutual. I was very flattered when I was asked to join the impressive roster of people who had illustrated an Aaron Reynolds book. As to your question, there have actually been many editorial cartoonists who’ve done children’s books. Theodore Geisel is a relatively well known one that comes to mind. As to my motivation, I’m like most of the adult population who grudgingly have to read some so-so books to their children: I thought I could do one. So being a person who, y’know, writes and draws, I set about drawing and writing, and through dumb luck ended up with an amazing agent, (Paul Rodeen) and somehow sold my amalgamated scribbles to an amazing editor (Neal Porter). 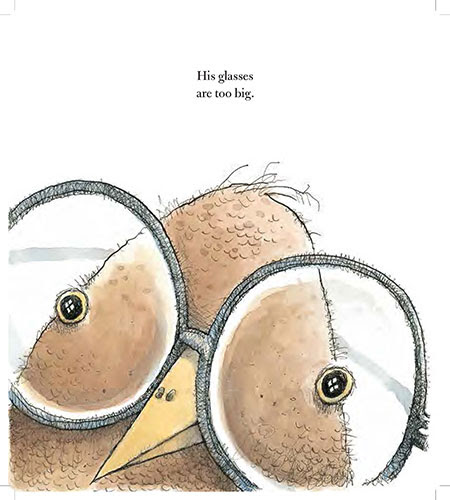 I must say, there’s not THAT much difference between editorial cartoons and children’s books. At the core of each (for me, at least) is a subtle exhortation to be empathetic. The only difference is that one audience is immature, and the other audience is children. I do enjoy straddling both worlds and while I have a full time job drawing daily cartoons for Newsday, I am firmly committed to creating many, many, many more picture books.
My turn. Do you come to your stories as a whole, or do you have a vague idea of a story, or character, and then work out the plot details as you go? And is it the same every time you write, or does the muse vary from book to book?

AR: Aw, shucks. Well, my stories usually start as just a nugget of an idea. NERDY BIRDY just came in a flash…just those two words. Being a full-blown nerd myself, I thought Okay, that’s a fun concept. It wasn’t until I sat down to write it that the story started to take shape and make sense. That’s usually how it is for me with picture books…a nugget, a character, a phrase, and then the rest forms as I work. For longer stuff, like graphic novels, I typically use an outline. I’ll plot out the story roughly and use it as a springboard, but it’s only a rough path. The story is free to ignore me altogether and take on a life of its own as it comes up with better ideas than I had. That’s the amazing thing about writing…sometimes you write the story and sometimes the story decides what you write. 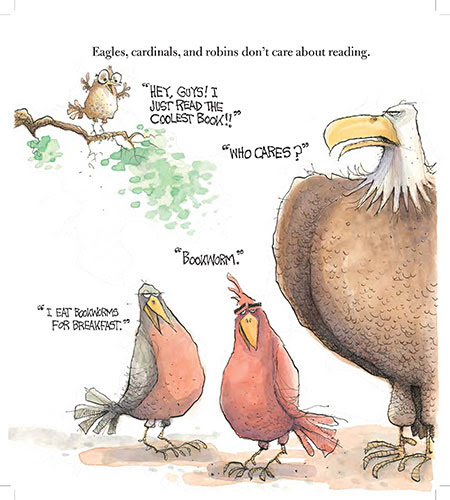 So, let’s talk more about getting published. My own journey to publication took years. Five years and over three hundred rejections before I sold my first book. How was your journey? Once you decided to pursue kids publishing, was the journey quick or slow?

MD: Oh wow. It took me a few months, but I think the fact that I was a fancy-pants cartoonist helped me to hoodwink people into thinking I knew what I was doing. It took me at least a decade of rejection and crushing humiliation to become a fancy-pants cartoonist though, so…
Your path as a celebrated writer is now carved solidly into the children’s book world. What other jobs would you be doing if you hadn’t followed your current path? (For the record, I wanted to be a marine biologist!)

AR: Haha! It’s funny that you say that. I never think that I’m solidly carved into anything. I’m constantly terrified that somebody is going to wake up and realize that I’m just making this stuff up! But I guess I am. I guess we all are as artist…just making it up as we go. 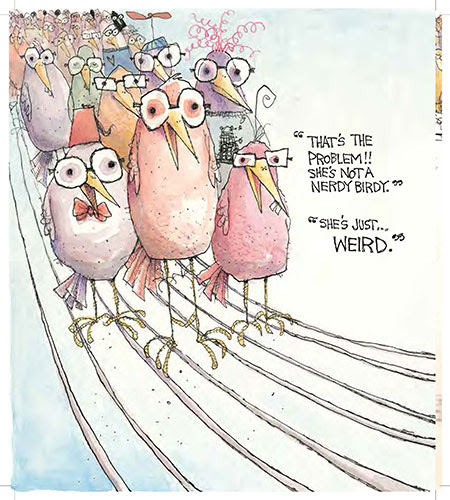 As far as what else I would do…it would have to be creative. Probably a chef. A little known fact is that I actually went to culinary school before becoming a writer. I love food and am greatly inspired by it. I had big plans to go on to chef-dom, but got side-swiped by other opportunities that led me to writing.
So…lots of people are surprised to find out that I never get to meet or work directly with my illustrators. Do you wish we had sat side-by-side to collaborate or do you appreciate the separation between author and illustrator that often exists? Answer honestly! You won’t hurt my feelings!

MD: I would’ve loved to have sat down with you to hear your hopes and dreams for your characters. Yours was the first book I tackled that I didn’t write, and I felt an overwhelming responsibility to not let you down. That said, the story and writing communicated a very clear and lighthearted aesthetic, so once I’d sketched out the visual story arc I felt pretty comfortable translating that in my own scribbly way.
Matt's studio: 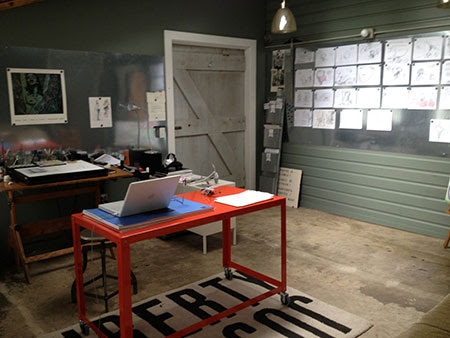 What is it like to conjure written characters and then see what one of your illustrative collaborators does with them? Does it make you nervous? Or is it always a pleasant surprise to let it go and see what comes back?

AR: Ha! I have learned to make like Elsa and Let It Go. I truly get excited to see what the illustrator will come up with. I know a number of writers who get tied up in knots over the process. I dunno…maybe I’ve just been very lucky. Most of my books have turned out better than I myself could have imagined. A lot of that has to do with my relationship with my editors. Even though I don’t usually get to pick the illustrators (I’ve just lucked out), I do get to decide what publishers and editors I make books with. So, when I trust my editor and have faith in their vision, then the rest usually takes care of itself. And it has, in spades.
Aaron's fave writing spot: 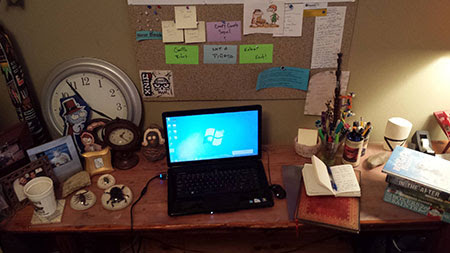 Though, I’ll be honest…I sometimes wish I could illustrate my own stories, but I can barely draw a stick figure (though that worked out okay for Jeff Kinney). What’s your favorite: illustrating your own stories or illustrating somebody else’s story?

MD: Good writing and stick figures work! A friend of mine, talented children’s author and illustrator Jamison Odone did a great book called Stickfiguratively Speaking - and it was fantastic. (Bad writing and great art don’t work so well though…)
So far I’ve authored and illustrated two books, and illustrated one (Nerdy Birdy) so I am not much of an authority, but I have enjoyed both immensely. The process is very different though. When I’m writing a children’s picture book, I sketch the dummy pages and write them at the same time – as a whole piece. It helps with the visual storytelling flow, and whereas I can write say, “the girl walked into the room”, I can also just draw a girl walking into the room, and eliminate a sentence! When I was sketching the story for Nerdy Birdy, I had to drape the art around the framework of your words, which was a tremendous challenge – and a lot of fun.
You probably noticed I got a bit carried away and threw in some of my own little humor flourishes. (I hope you didn’t mind). Do your illustrators often do that? Also - If you could illustrate your own work, what style would you try to master? Comic book, noir, painterly, pointillism…?

AR: I LOVE it when the artist brings their own humor and visual jokes to the story. That’s their job, and the best illustrators do exactly that. I feel that it’s the illustrator’s job not just to draw my words, but to dance WITH me, to tell the rest of the story that isn’t in the words. That’s the power of having two creative individuals working on it. And the best books do just that.
As far as what style I would try to master…I don’t know where to begin answering that. Probably just graduating up from stick figures would be a good start. 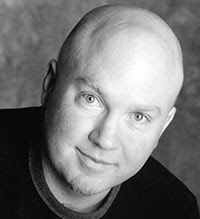 Speaking of great artists, I think the best artists of today are illustrating kids’ books. In the past, great artists could primarily only express themselves in paintings. I totally think Van Gogh would have illustrated picture books if he could have (and maybe not been such a tormented artist). What great artists from times gone by do you think would have made awesome children’s book illustrators?

MD: That’s a superb question (especially as I am often stopped and told that I resemble a certain earless Dutch painter.) I have so very many favorite artists who I imagine would’ve creating stunning children’s books. How about Salvador Dali? I am very fond of his bread hats.
Matt in his studio: 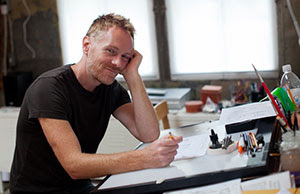 An adjunct to your question; which of your favorite adult writers would you like to see create a children’s book?

AR: Fewer than you might think. Some try and fail, in my opinion. The idea is out there that creating a children’s book is easy, but it’s such a different medium than writing for adults. Having said that, there are many creatives that never did create kids’ books that I wish had: Jim Henson and Albert Einstein, to name a couple.
So, Matt. Got any new books on the horizon that even I don’t know about yet? Give us the scoop!

MD: I have so many story ideas in my sketchpad, but it’s too early to officially tell anyone which one will be my next book. (Though a little birdy told me there might just be a follow-up to Nerdy Birdy…)
How about you? Anything exciting/challenging/secret we should know about rumbling on your literary horizon?

AR: I’m excited to say that I have several new books coming. There’s a new picture book due out next year just in time for Election year called PRESIDENT SQUID. I have a new graphic novel series that debuts next year as well (the title is still being finalized). And yes…I just finished a second NERDY BIRDY book, that you should be working on soon. So get busy!!!