Recently, Stan was a guest on The New Screen Savers. It's a show about computers and technology which used to be the headline show for cable's Tech TV channel. Since the channel's demise, the show has gone live online. If there's a geek in your life, you can be sure he or she knows about it. Stan has been an avid fan of the show since it's inception.
Stan had a question about saving my enormous art files to the Cloud - something we've been trying to figure out for some time now. I work digitally and my illustration files are enormous - often about a half meg each. I can't keep them all on my laptop because it has limited space. So we've been employing external hard drives. It works, but it's not ideal from an access or safety standpoint. Cloud storage is available out there for average-sized files, but we've not found an affordable service available for files like mine. 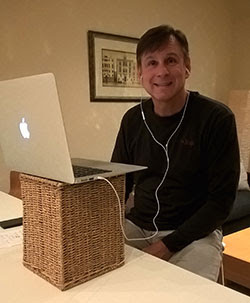 Stan turned to the experts. He submitted his question earlier in the summer and the show's producers got back to him a few weeks ago. The show is filmed live in California and now that we're in Scotland that meant an 8-hour time difference in screening. So Stan set up Skype to talk to Leo and the guys at our new kitchen counter and was filmed at about midnight.
The show is now archived online and you can see Stan do his bit. Stan comes on at the 57:00 mark. CLICK HERE to go see it, and Go Stan!
at August 30, 2015

Email ThisBlogThis!Share to TwitterShare to FacebookShare to Pinterest
Labels: BigNews