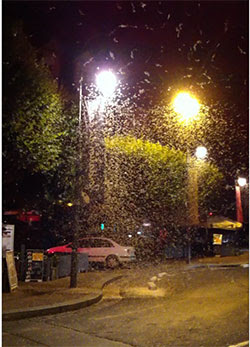 While we were in Blois, we experienced a natural phenomena - swarming Mayflies. I'd never seen anything like it. The swarms were as thick as snow, but more like a blizzard because they flew every which way, including into your hair. ACK! They only live for a day and fell to the ground in drifts of white, which crunched when you walked over them (or drove over them as you'll hear in the video). The next morning, they all lay dead with their little white wings sticking up to the sky. What a sight! CLICK HERE or the image to go see the video on YouTube.
I also found this lovely poem by George Crabbe...

In shoals the hours their constant numbers bring,
Like insects waking to th' advancing spring;
Which take their rise from grubs obscene that lie
In shallow pools, or thence ascend the sky:
Such are these base ephemeras, so born
To die before the next revolving morn.
—George Crabbe, "The Newspaper", 1785
at August 30, 2015