As Robert Louis Stevenson said, "[Arthur's Seat is] a hill for magnitude, a mountain in virtue of its bold design." What it is is an old dormant volcano, right in the heart of Edinburgh. Between the Castle (also built on a volcano), Calton Hill (yup - volcano) and Arthur's Seat, it's very hard to get lost in this city. They give you your bearings.
Arthur's Seat is GRAND. We've been staring at it since we moved here, wondering when we would make the hike up it. A recent sunny, beautiful day became the moment. We took layers, just in case, water bottles and cameras and started our trek. 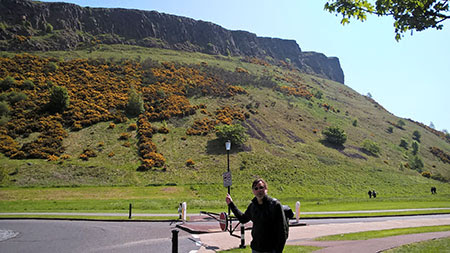 To get there, you head for Holyrood Palace, hook a right at Parliament, enter the park and cut up at the ice-cream truck. The trek begins immediately. Hoo boy. We had to stop for pictures on the way up. Uh-huh, just pictures... okay, and to catch our breath. 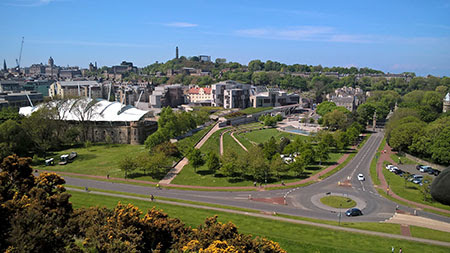 The trail goes up, up, up, then wraps around the cliff faces. It's incredibly beautiful and STEEP. This is looking straight down. 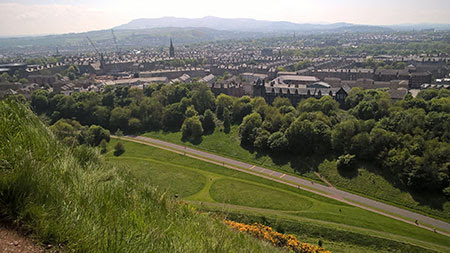 Here's Stan standing at the edge with a view of Newington (on the south side of town) and the Pentlands beyond. That's a sheer drop right behind him. There are no fences, and it is indeed dangerous. In fact, a hiker fell to her death a few days after we were there. 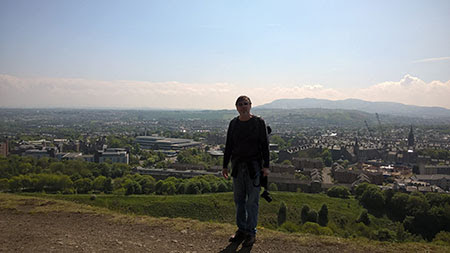 Turning around, we faced an incredible rock wall. 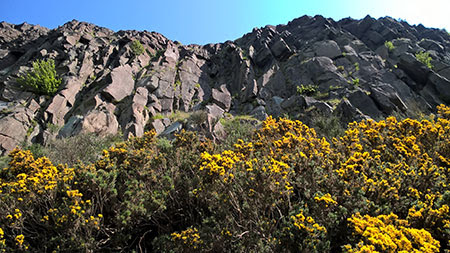 I have a bad knee from an old skiing accident, but I was determined to get to the top of that wall. Heck, tourists were hiking up wearing purses and cute shoes. If they could do it, so could I. And we did. The view from up there was amazing. That's the trail we came up running on the left. 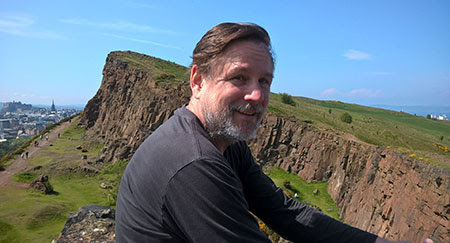 From up there, we could see all the folks climbing and bouldering up the cliff face, some all the way up - no ropes. I used to do that - with ropes. These Scots are made of hearty stuff. 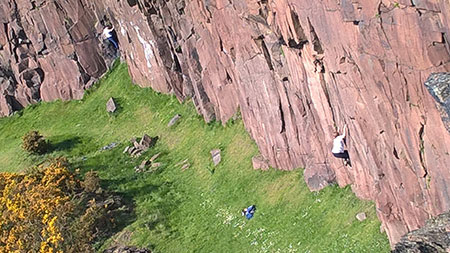 I'll admit, I had a wee bit of height fright up there. Yes, I used to hang-glide. But back then I had something attached to me that kept me aloft. I didn't have anything holding onto me that day, and the wind was whipping.
And yet, we hadn't reached the summit. Maps told us it only took two hours to reach the top. Hm. We looked at the trail - see the tiny ants zig-zagging up the side? Yeah, those are people climbing to the top. We would have to go down and then back up again. Up THAT. Yeah, no. My knee was already starting to freeze up on me, it just refuses to bend anymore. When my knee starts doing that, it's actually worse going down than it is going up. Even if I did make it to the top, coming down would be pure pain. *le sigh*
So, we hooked a left. On the back side of the cliff, we discovered a valley. I suppose it was formed from the lava blowing out the side of the hill, like Mt. St. Helen's (there are a lot of similarities between the two mountains). It's formed so perfectly. Here it is from the top of that cliff. 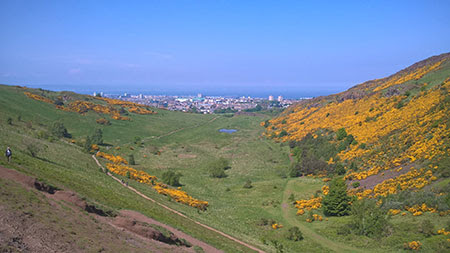 I'm glad we got to see the views from the cliff face, but the valley was so much more our speed. Dogs ran up and down the sides with unbridled joy. Scotch broom bloomed everywhere creating wind breaks. And there was a wee pond at the bottom. We headed that way. Stan then surprised me with a wee picnic. He'd brought stilton, crackers, and an apple - so perfect! We found a little hidey hole from which to enjoy it and the sun. 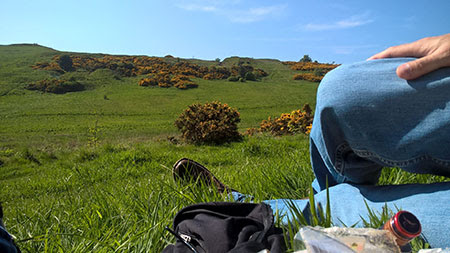 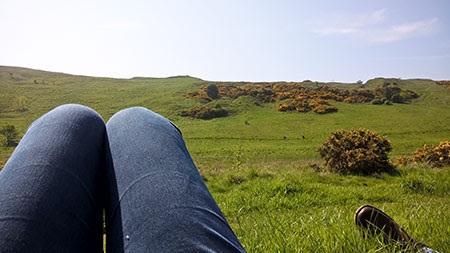 We just laid there for a good hour or more - we both got tans. Gads, it was a beautiful day.
When it was finally time to leave (to go meet friends for dinner), we headed down the gentle slope. My knee had indeed locked up, so I was limping pretty badly. PAH! I suppose it's good to know my limits - so that I can predict the price of going past them. (I did indeed pay - lots of ice and aspirin afterwards.)
At any rate, on the way out we passed a lovely, and still operational old well. 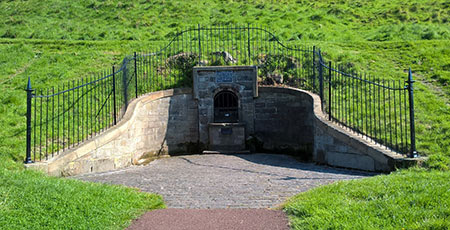 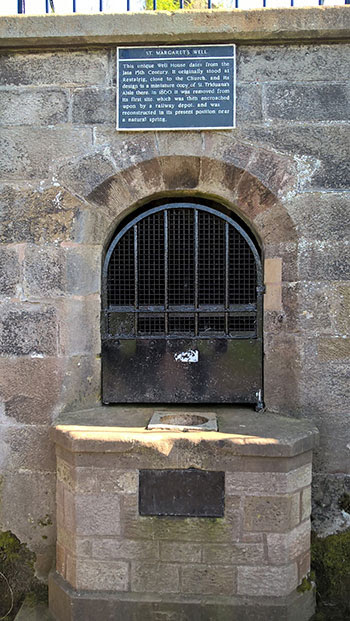 And then again past parliament, where children and dogs played in the water feature out front.

All said, we have done Arthur's Seat. Obviously, it's a dangerous place. But it's also a stunningly beautiful place that feels like another planet even through you're right in the city. Will I go back? Oh yes. But perhaps I'll keep to the valley next time. Ahhhhh.
at June 04, 2016

Oh, how I love this post! I wish we'd gone with you that day. So beautiful!

Next time, Genetta - on you ANNUAL visit!!! Hugs, e

if you take a black bin liner you can slide down on the grassy slope it is the best fun :-D