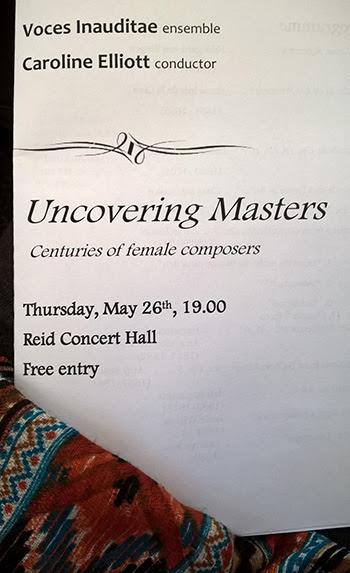 We have made some wonderful friends here in Edinburgh, and if there's anything that sets them apart, it's that they are all brilliant and enormously talented in unique and wonderful ways. For instance, my friend Amandine. She's a publicist during the day, but with her free time, she loves to sing. Not just any singing - she sings in choral groups and ensembles, like the one we went to see recently. Amandine is in the front row on the far left.

The performance was held in Reid Hall, a beautiful building that I haven't seen much of because it's been surrounded by construction since we arrived. It was hard to find the back entrance (the only way in right now), but was worth the hunt. It was stunning. 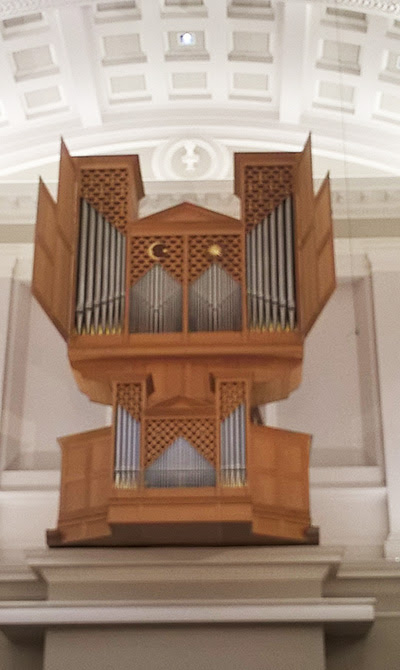 The unique thing about this ensemble is the music selections were all by female composers, conducted by Caroline Lesemann-Elliott (a UoE student!). You may recognize some of the last names, although probably not the first ones: 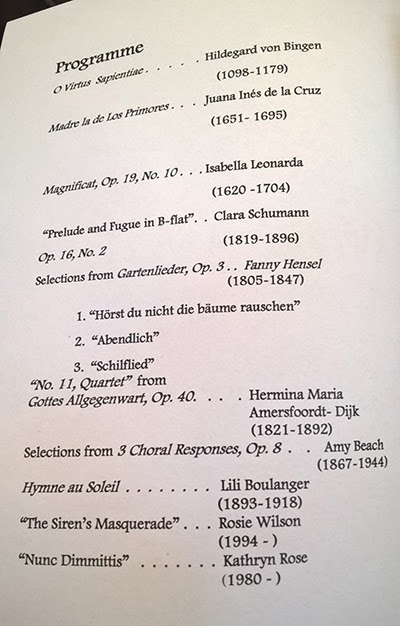 Key to this performance was to place the music in context. Women musicians have not been taken seriously throughout history. Heck, even today, you rarely hear about female composers, which is part of why this performance was so nice. Look at the dates on some of the last performances - the music was wonderful! But this quote from the program is indicative of what female composers were and often still are up against... 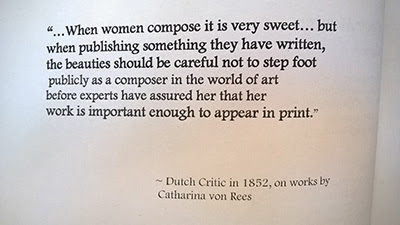 Of course, that didn't and doesn't stop them. The first piece we heard was proof. O Virtus Sapientiae by Hildegard von Bingen. She lived from 1098 to 1179. Yes, you read that right - the 11th century. We may not have any audio recordings from that time, but we can still hear the voices - harmonies written long before America was discovered (by white folks), even before Edinburgh was officially established (although people have been living here since the Mesolithic era). CLICK HERE to have a listen on Youtube.
It reminded me of the female singer and composer, Barbara Strozzi, who came into popularity in Venice during the Baroque era. She was generally thought to be a courtesan - her only 'in' to the music scene, which is why she is always rendered half clothed. Although, it's possible the lens of her life was painted and recalled through jealousy, as she was one of the most talented musicians of her time. Click the image to listen to her YouTube channel. And ENJOY! 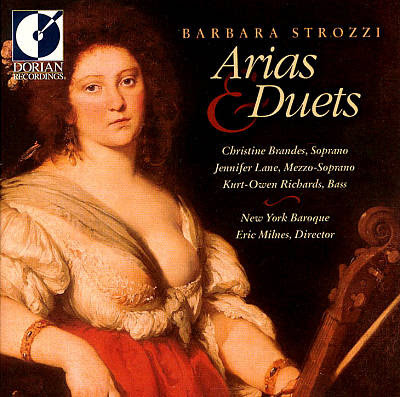